When the funnel was spotted, people in a city generally without basements had to look for shelter elsewhere.
By Adriana Navarro March 23, 2022
Facebook
Twitter
Linkedin
Email 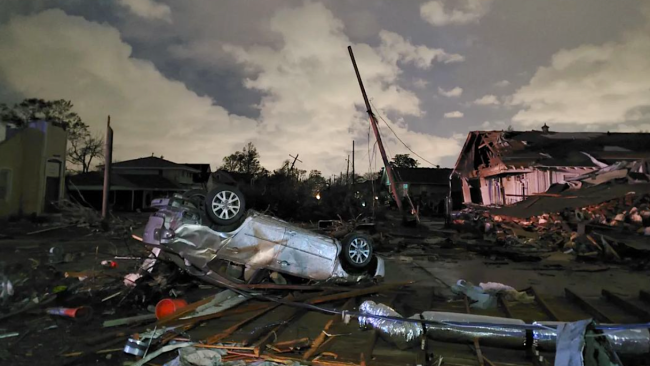 Extensive and widespread damage was visible in New Orleans' Lower Ninth Ward on Tuesday, March 22, 2022, after a big tornado tore through the neighborhood during the early evening hours. (Instagram/reggieart)

A large tornado tore through the New Orleans metropolitan area late Tuesday evening, ripping roofs off homes, flipping cars, killing at least one person and injuring multiple others as severe weather continued to push through the South.

Roofs were torn from homes in the suburb of Arabi and New Orleans’ Lower 9th Ward as the powerful tornado slammed the city. There were reports of people trapped inside bathrooms in their homes after taking cover, according to St. Bernard Parish President Guy McGinnis.

McInnis said that at least one person was killed by the tornado in Arabi, according to NOLA.com. He gave no details on how the person died and said multiple others were injured.

Just after 7 p.m. CDT, the ominous dark clouds and funnel were spotted in the area, prompting people in a city generally without basements to look for shelter elsewhere. Photos of the aftermath showed debris scattered, vehicles overturned and wires torn down in an area that had been badly damaged by Hurricane Katrina nearly two decades earlier and Hurricane Ida just last year.

Michelle Malasovich lives in Arabi, and she was initially worried about her family that lives in areas north of Louisiana that were also receiving severe weather. She told The Associated Press she was texting her family when “all of a sudden the lights started flickering.”

Her husband, who was out on the porch, saw the tornado coming.

“It just kept getting louder and louder,” said Malasovich. After the storm passed, Malasovich and her husband came out to assess the damage. “Our neighbor’s house is in the middle of the street right now.”

The AP also reported that there was a strong smell of natural gas in Arabi in the aftermath of the twister.

The Louisiana Office of State Fire Marshal said on Twitter that search and rescues teams were working through the night and into Wednesday to ensure there are no individuals trapped in areas ravaged by the tornadoes. Officials said crews will also conduct generator safety checks since many were without power.

The National Weather Service said Wednesday morning that at least two tornadoes had been confirmed in the region. One of which tore through New Orleans East communities and the Lower 9th Ward, and another in the community of Lacombe, located across Lake Pontchartrain to the north of New Orleans. The most heavily concentrated damage was in Arabi.

Storm survey teams were dispatched Wednesday morning to Arabi and the Lower 9th Ward to begin studying the damaged areas to determine the tornado’s strength, the NWS said. Crews were also expected to survey damage in the nearby city of Gretna and Lacombe.

The tornadoes and the associated storm were a part of the same system that hit parts of Texas and other South Central states this week, meaning that at least two deaths were associated with the storms.

Over 60 tornado warnings were issued across Texas, Oklahoma, Arkansas and Louisiana on Monday alone, but the storms hit Texas the hardest that day. At least one fatality and over two dozen injuries are being blamed on the tornadoes and severe thunderstorms that struck the state.

Schools across southeastern Louisiana, including schools in New Orleans, switched to online learning or released students from classes early as a result of the severe weather, and the campus police at Mississippi State University in Starkville posted a photo of a tree that had been downed on campus. Power lines had also been downed.

The University of Alabama suspended normal operations through 5 a.m. CDT Wednesday in preparation for the severe weather, and by 5 p.m. CDT, most of Alabama was under a tornado watch.

While others braced for the oncoming storms, Round Rock, Texas, resident Nancy Smith and her family were picking through the remains of their home on Tuesday, trying to salvage clothes and keepsakes after a tornado had ripped off part of the house’s second floor the day prior. While her son and grandson had been in an upstairs room when the tornado had come through, Smith told AccuWeather National Reporter Bill Wadell that everyone was okay.

“For them to be up there and the room’s completely gone, yeah, God was watching over us,” Smith said.

Williamson County Judge Bill Gravell Jr. said in a press conference Tuesday that more than 1,000 homes in the county had been damaged or completely destroyed amid the storms.

North of Dallas, a National Weather Service (NWS) survey team confirmed that a “significant tornado” impacted the Sherwood Shores community in northern Grayson County. The storm claimed the life of a 73-year-old woman, and 11 other people in the county were injured, according to the NWS.

A confirmed tornado left behind a trail of destruction through Jacksboro, Texas, located northwest of Dallas. While there were no injuries reported, the twister, which later received a preliminary rating of an EF3 tornado with maximum wind speeds reaching between 140 and 150 mph, reportedly damaged Jacksboro Elementary School and Jacksboro High School. No children were injured at either school, according to WFAA.

At least 16 tornadoes have been confirmed in Texas as part of Monday’s severe weather outburst.

Texas Gov. Greg Abbott visited the city along with Crockett, another community that had been severely damaged by Monday’s storms, and signed a disaster declaration for 16 counties impacted by the tornadoes. He said that about 10 people in the Crockett area had been injured by storms, according to the AP.

“We are devastated by the tornadoes that have hit our Texas communities, but remain confident and steadfast in our ability to rebuild together,” Abbott said. “Thank you to all emergency responders and members of the Jacksboro and Crockett communities who have come together to help both neighbors and strangers. As Texans, we have endured great storms before and have built back even stronger, and I have confidence in our ability to do so again.”