Multi-day Severe Weather To Wind Down Along Southeast Coast

Severe weather that sparked dozens of tornadoes across the southern U.S. will end in coastal areas of the Carolinas and Florida.
By Alex Sosnowski March 23, 2022
Facebook
Twitter
Linkedin
Email 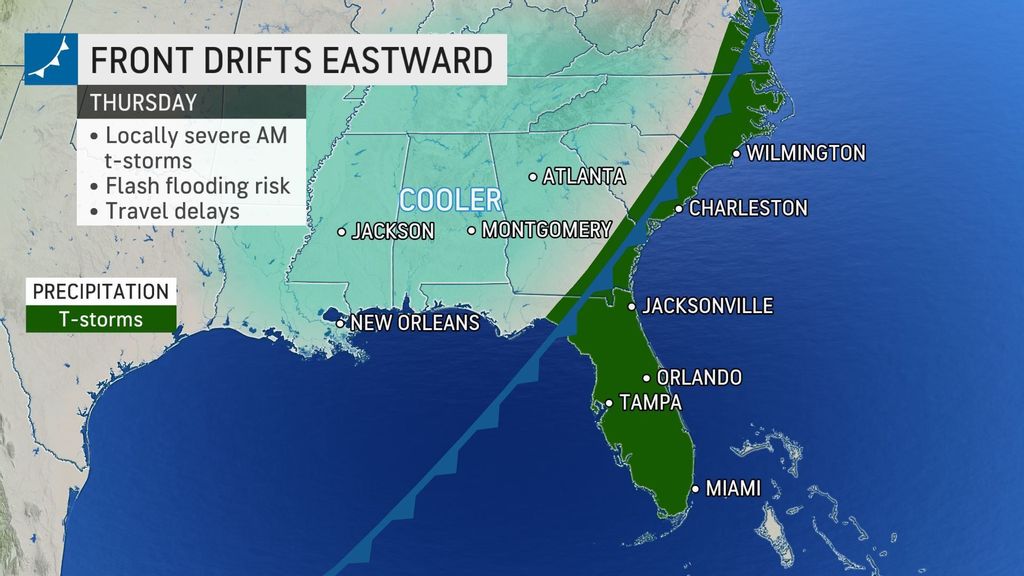 The same cold front that made steady eastward progress through midweek across the Central states and interior Southeast will pause right along the southern Atlantic and eastern Gulf coast areas on Thursday. (AccuWeather)

A multi-day outbreak of severe weather that began on Monday and sparked dozens of tornadoes across the southern United States will conclude in coastal areas of the Carolinas and the Florida Peninsula on Thursday, AccuWeather meteorologists say.

Fears of a tornado striking a heavily populated metro area during the outbreak were realized when a powerful twister struck the New Orleans area Tuesday night. The intensity of the storm that killed one person, injured several others and caused significant damage was still being assessed as of Wednesday morning. The storm hit some neighborhoods still recovering from Hurricane Katrina, which devastated parts of the Gulf Coast in 2005.

The same cold front that made steady eastward progress through midweek across the Central states and interior Southeast through Wednesday will pause right along the southern Atlantic and eastern Gulf coast areas on Thursday. That delay is likely to be enough to allow more showers and thunderstorms to erupt, and there might be enough lingering warm and humid air along the coast to allow some of the thunderstorms to turn severe.

Parts of this zone will continue to be drenched by rounds of showers and thunderstorms into Wednesday night. As a result, the additional downpours will raise the risk of flash flooding. However, there will also be the risks of strong wind gusts and frequent lightning strikes, and a couple of the strongest thunderstorms may also produce a tornado or waterspout.

People spending time outdoors should keep an eye out for fast-changing weather conditions, meteorologists say. As long as thunder can be heard, there is a risk of being struck by lightning.

Rain has been plentiful in parts of northern and central Florida during March, which has been quite a turnaround from the drier-than-average conditions this past winter. Rainfall amounts in Jacksonville and Orlando, Florida, were about 50% of average from Dec. 1 through Feb. 28. During the first 22 days of March, both cities have received about two times their average rainfall for that time period of 2.34 and 2.10 inches, respectively.

Areas farther to the north along the Atlantic coast from Georgia to the Carolinas have still been missing out on drenching rainfall this month. Most places from Savannah, Georgia, to Wilmington, North Carolina, have had between 40 and 60% of their March average and could use a thorough soaking.

There is some good news for those weary of the severe weather and those involved in storm cleanup efforts. A break in the severe thunderstorms will last through this weekend as the eastward progression of strong storm systems from the Pacific Ocean takes a pause and a flow of dry and cool air from Canada expands.

Temperatures will trend downward late this week and into this weekend in the Southeast states as a southward dip in the jet stream sets up shop in the eastern third of the nation.

The pattern change may be deemed to be too cool by some with temperatures of 5-10 degrees Fahrenheit below average. Highs will generally range from the 40s and 50s in the southern Appalachians, and clouds, rain and wet snow showers will be possible there. Away from the mountains, the combination of low humidity and sunshine should make for generally delightful weather conditions for most outdoor activities.

Farther south, temperatures will settle in the mid-70s in central Florida and the upper 70s in South Florida.

Warmth will build farther to the west over Texas and the southern Plains this weekend.

The risk of severe weather may increase from west to east during the middle and latter part of next week as a new storm from the Pacific rolls ashore and tracks from the Western states to the Plains.