Ancient People In World’s Oldest City Painted Skeletons Of The Dead, Buried Them In Their Homes

The ritual included painting the walls surrounding the burial site, and the skeletons were later revisited and reburied.
By Joseph Golder March 23, 2022
Facebook
Twitter
Linkedin
Email 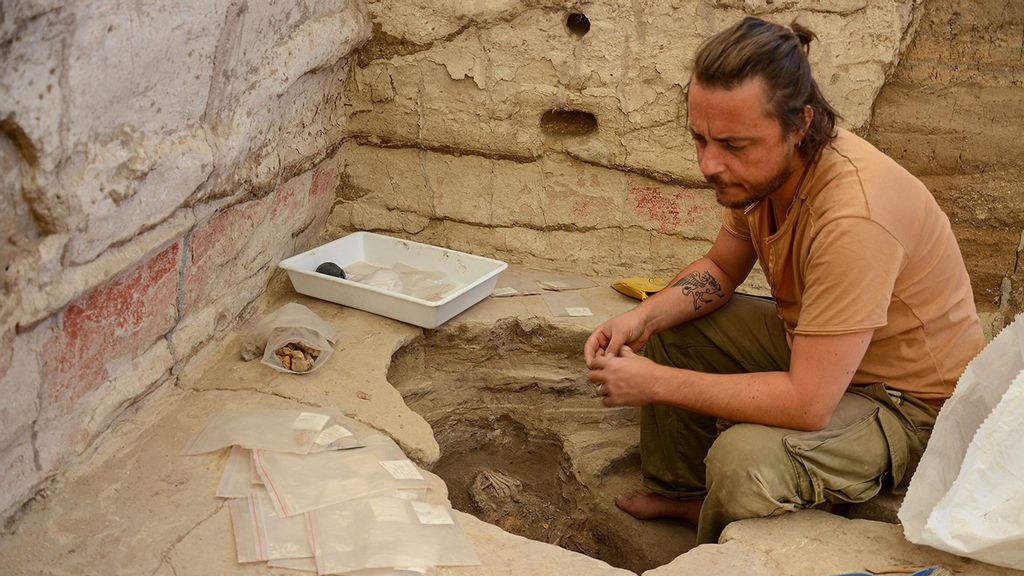 The inhabitants of the “world’s oldest city” — now a UNESCO World Heritage Site — painted the skeletal remains of their dead and buried them within the structures of their homes, painting the walls as part of the burial ritual, according to researchers.

They would sometimes later dig them out and pass around parts of the skeletons, including their skulls, among the community before burying them again and repainting the walls.

A team of international researchers led by the University of Bern in Switzerland examined the practice in a new study published in the journal Scientific Reports.

In a statement, the institution said the research provides “new insights about how the inhabitants of the ‘oldest city in the world’ in Catalhoyuk buried their dead.”

The 9,000-year-old proto-city of Catalhoyuk, in what is now south-central Turkey, is a UNESCO World Heritage Site stretching across 1.4 million square feet (130,000 square meters) of land covered with mud-brick buildings that were built closely together.

The intramural burial rituals involved skeletons being buried within these early human dwellings, with the walls being painted a reddish color using the natural, clay-earth pigment ochre.

The University of Bern said red ochre, which is a mixture of ferric oxide, sand and clay, was commonly used at the settlement, noting that it was found on “some adults of both sexes and children.”

Study co-author Marco Milella of the Department of Physical Anthropology at the university said cinnabar — a toxic, mercury-based mineral — was also found on the remains of some of the city’s inhabitants.

Only some individuals were buried with this paint on their bones, the study revealed. “The criteria guiding the selection of these individuals escape our understanding for now, which makes these findings even more interesting. Our study shows that this selection was not related to age or sex,” said Milella, who was part of the team of anthropologists who excavated and studied the human remains.

“Intriguingly, the number of burials in a building appears associated with the number of subsequent layers of architectural paintings,” the university said in its statement, noting that this suggested a connection between the burial and the repainting of the house.

The university also said that in “the Near East, the use of pigments in architectural and funerary contexts becomes especially frequent, starting from the second half of the 9th and the 8th millennium B.C.”

Neolithic, or late Stone Age, archeological sites in the region have revealed “a large body of evidence of complex, often mysterious, symbolic activities” that included “secondary funerary treatments, retrieval and circulation of skeletal parts, such as skulls, and the use of pigments in both architectural spaces and funerary contexts,” the university said.

Some of the skeletons “stayed” within the community, having been retrieved and circulated for some time before being buried again. This second burial of skeletal elements was also accompanied by wall paintings.

The study found that “visual expression, ritual performance and symbolic associations were elements of shared long-term socio-cultural practices in this Neolithic society.”