“Bombs fall every 10 minutes,” says a commander of the Ukraine fighting force that is now part of the national guard.
By Joseph Golder March 22, 2022
Facebook
Twitter
Linkedin
Email 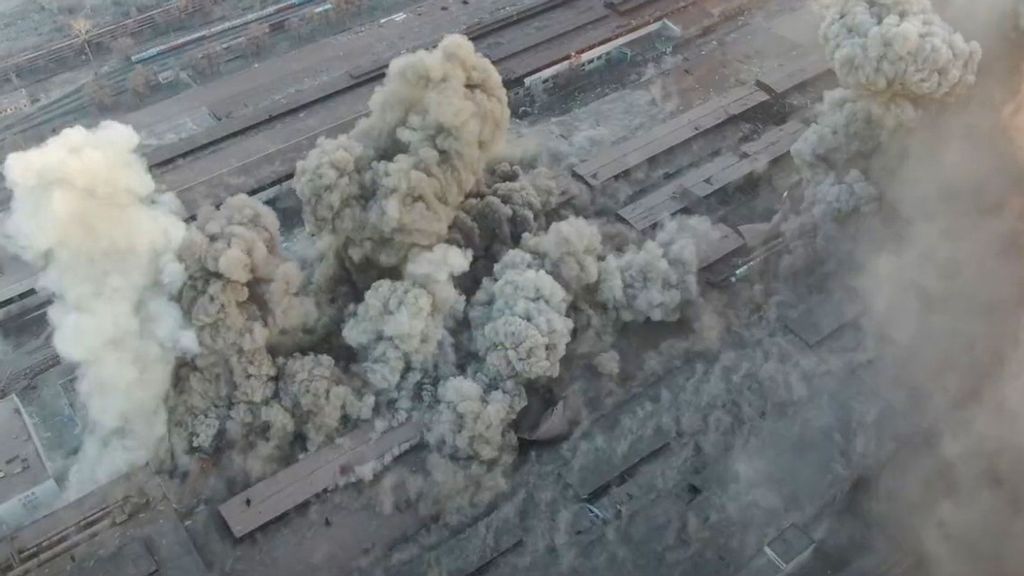 Russian aircraft drop more bombs on the city of Mariupol in March 2022 as seen in this screenshot from a video. (@Polk_Azov/Zenger News)

The images come after reports showed civilians being targeted, with a children’s hospital, a maternity ward and numerous homes and blocks of apartments having been destroyed. Images released last week also appeared to show an elderly civilian being shot by a Russian tank.

The Azov Regiment, also known as the Azov Battalion, began as a volunteer militia with a right-wing extremist ideology in May 2014, and has since been incorporated into Ukraine’s National Guard. However, Putin has seemingly played on the group’s image as justification for launching the invasion to “de-Nazify” Ukraine.

“If Russia manages to capture alive significant numbers of Azov Brigade fighters, it is likely they will be paraded on Russian state-controlled media as part of the ongoing information war to discredit Ukraine and its government,” Frank Gardner, the BBC’s security correspondent, wrote on March 21.

The Azov Regiment released a video on March 21 that it said showed its soldiers “destroying enemy infantry” as “the struggle for Ukrainian Mariupol continues.”

With the Russians’ apparent strategy of trying to break the morale of the people of Mariupol by bombing civilians and besieging the city in a bid to starve them out limping along, the Azov Regiment now says that “enemy aircraft are dropping bombs on the infrastructure of Mariupol.

“Factories and industrial enterprises that provided jobs and allowed them to conduct international trade are being destroyed,” Azov said on Twitter. “Thus, the occupiers are trying to destroy Ukraine’s economy.”

Azov also issued a statement attributed to its deputy commander, who goes by the call sign Kalyna, saying “bombs fall every 10 minutes.”

It also said that four Russian landing ships had begun firing on what was left of the city, claiming that Azov forces had successfully destroyed at least four Russian tanks, an unspecified number of armored personnel carriers and killed “many hordes of infantry.”

Azov said it had managed to sink a Russian boat and that it had seized numerous weapons from the Russians, which it can now use against them.

The deputy commander said his soldiers were “bravely defending Ukraine” and called on them to kill “special forces” and “traitors who are mobilized and thrown like cannon fodder” against them.

He labeled the Russian forces the “barbarians of the 21st century” and said that they were without “conscience or honor.”

“We believe in the victory of Ukraine! We believe that the sky in Mariupol will be closed. The Sea of Azov will be ours again,” he said.