Unable to coax the animal out, an officer picked up the frightened deer and lifted it to safety.
By Lee Bullen March 22, 2022
Facebook
Twitter
Linkedin
Email 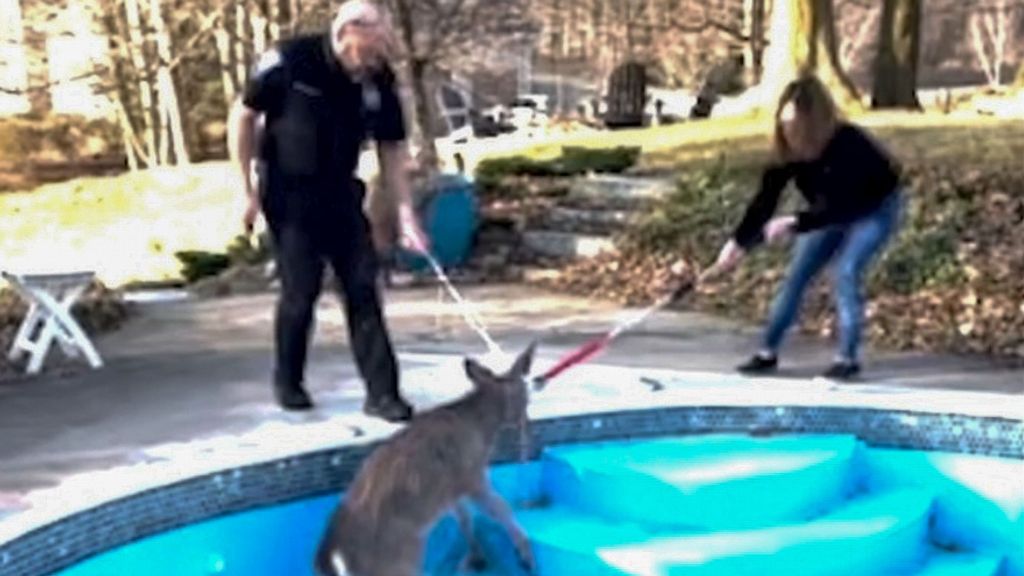 The animal rescue took place at a home in South Bend, Indiana, on St Patrick’s Day.

The police said the deer had gotten into the empty pool, but could not navigate its way out. They failed to get the deer out via the steps. In the footage, the officers are seen positioned around the empty pool, while the animal remains rooted in the middle, peering up at them.

“St. Patrick’s Day started out fairly unlucky for one deer in South Bend after it found its way into an empty backyard pool, but couldn’t get back out,” the South Bend Police Department said.

“Fortunately, 1st Detail Officers Gutierrez and Kaszas stepped in to help the deer turn its luck around.

The officers, along with Animal Control, first attempted to lure the deer to the pool steps, so it could walk out on its own. They tried various tactics. However, the animal became frightened and jumped back into the pool, just as it had a chance to escape.”

Eventually, Officer Gutierrez took action. He got into the pool and picked the scared deer up in his arms and removed it. The animal promptly dashed off into the distance and back into the Indiana wilderness.

SBPD said: “Kudos to Officers Gutierrez and Kaszas for using inventive ways to help rescue this animal in need! All in a day’s work for SBPD!”

In January, Welsh police officers rescued a terrified, semi-airborne deer after its antlers became tangled in a tree swing rope, using only scissors.

The incident took place near the market town of Welshpool, located in Powys County, Wales, U.K. Police officers had to proceed with caution, as the antlers could have injured them. The police said the deer was so scared it tried to flee, but the rope held it back. It became airborne every time it tried to run.

Two officers worked in tandem. One used a pair of scissors to cut the rope, as the other strokes the deer’s head to keep it calm.

Also in January, Long Island police rescued a baby deer that had fallen into icy waters. Suffolk County Police Marine Bureau Officer Robert King used an ice sled to approach the animal. He grabbed the deer out of the water and put it onto the sled, while his partners pulled it back to shore.