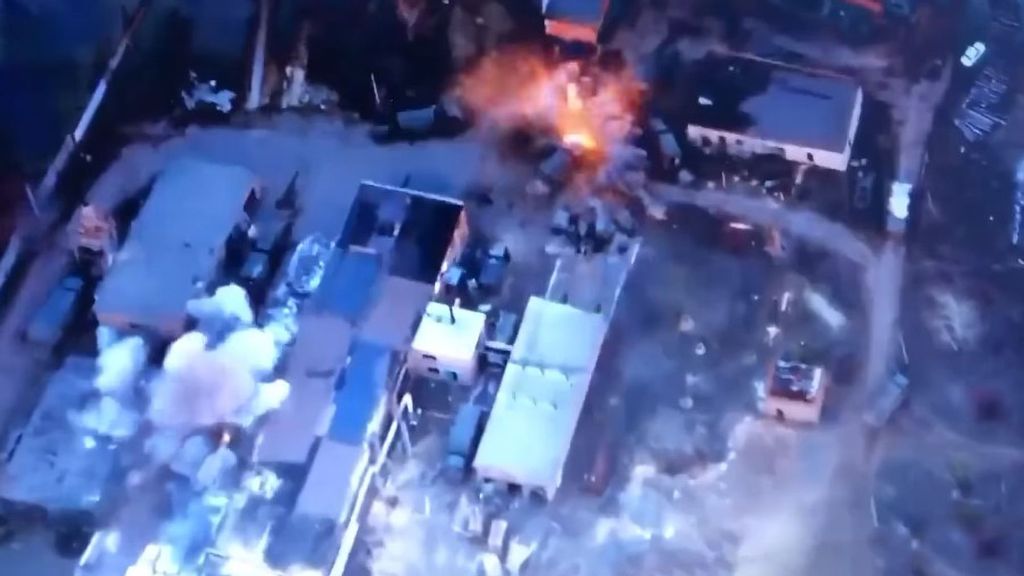 Ukrainian artillery firing from the sky is seen in a video apparently destroying Russian targets, according to Ukraine’s Ministry of Defense, which did not specify where the footage was filmed.

“Ukrainian artillery filigree destroys the Russian invasions. Together we will win!” the General Staff of the Armed Forces of Ukraine said in a statement accompanying the footage posted on social media early in the morning of March 20.

Three explosions can be seen taking place, and the targeted vehicles appear to have been hit and destroyed. The camera then zooms out and shifts its focus away from the targets, with the presumably airborne vehicle then apparently flying away, the mission seemingly having been completed.

Russia has failed to gain control of the air in its war against Ukraine, and this has “significantly blunted their operational progress,” the U.K.’s Defense Ministry said in its latest intelligence report.

The Ukrainian battlefield success does not mask the reality that the casualty count and financial costs are mounting for both sides in a war now in its fourth week.

The Office of the United Nations High Commissioner for Human Rights says it has confirmed that more than 900 civilians have been killed so far in the war in Ukraine, but the office warned that the actual number is likely “considerably higher.”

However, Ukrainian President Volodymyr Zelensky said on March 21 that any compromises agreed to with Russia to end the war would need to be voted on by Ukrainians in a referendum.

“The people will have to speak up and respond to this or that form of compromise. And what they [the compromises] will be is the subject of our talks and understanding between Ukraine and Russia,” Zelensky said in an interview published by Ukrainian public broadcasting company Suspilne.

Ukraine had rejected Russia’s ultimatum that people in hard-hit Mariupol surrender by early Monday morning with Ukraine’s deputy prime minister, Iryna Vereshchuk, saying: “There can be no question of any surrender, laying down of arms.”

The United Nations’ International Court of Justice five days ago ordered Russia to immediately cease its invasion and withdraw its forces, which was the first time the court has made such an edict.

It ruled that Russia “shall immediately suspend the military operations that it commenced on 24th February” by a vote of 13 to two, with Vice President Kirill Gevorgian of Russia and Judge Xue Hanqin of China dissenting.