If the recent heat wave in the Northeast and Southeast was rough, it's nothing compared to the "Dirty ‘30s."
By John Roach March 22, 2022
Facebook
Twitter
Linkedin
Email 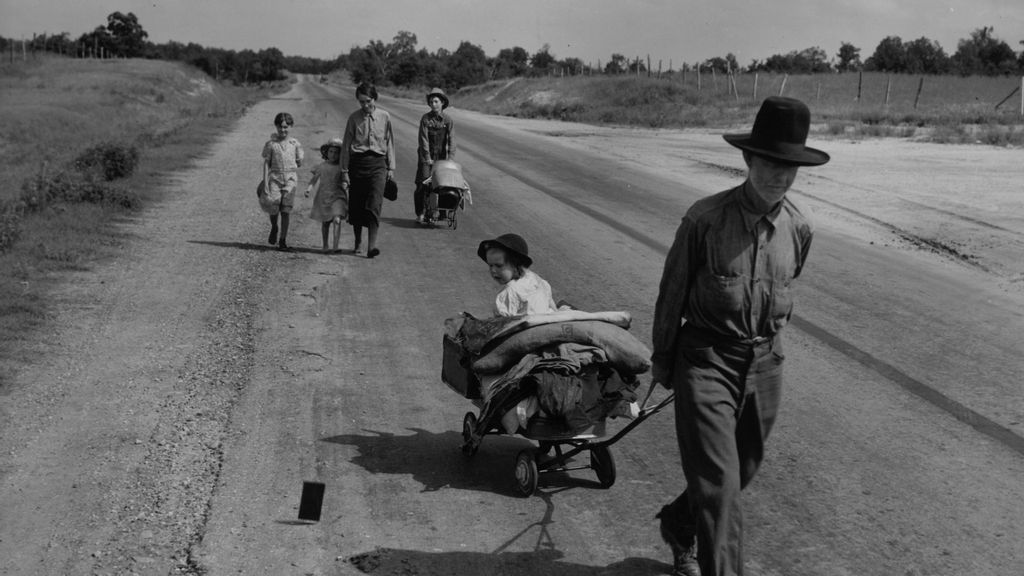 In this June 1938 photo, a family in Pittsburg County, Oklahoma, is forced to leave their home during the Great Depression, due to a serious drought in the region. (Dorothea Lange/Keystone/Getty Images)

It was nearly 90 years ago when stifling heat, drought conditions, dust storms and damage to crops and cattle — all on top of the years-long Great Depression — caused unfathomable damage for millions of Americans, particularly those in areas of the United States that came to be known as the Dust Bowl.

There were even biblical-style plagues as grasshoppers and chinch bugs overwhelmed large sections of the country and decimated farmers’ wheat and corn.

A young girl in North Dakota keeping a diary at the time wrote, “Life in what the newspapers call ‘the Dust Bowl’ is becoming a gritty nightmare.”

If the recent heat wave in the Northeast and Southeast was rough, it’s nothing compared to the “Dirty ‘30s.” The widespread heat started early and lasted most of the summer of 1934.

According to the Bulletin of the American Meteorological Society, from June 19 to Aug. 21, “not a single day passed without a temperature of 100 degrees or more being registered at someplace in the country (excluding desert stations … where such temperatures are normal).”

“Clearly, if a heat wave goes on for 10 days, 12 days or more — as the one in 1934 did — it can be devastating,” said AccuWeather Founder and CEO Dr. Joel N. Myers. “The heat wiped out crops and people were made destitute. The Great Depression was prolonged and made much more severe because of the heat,” Myers continued

“Plus, there was a huge drought – worse than anything we have seen recently,” he added. “So, it was a combination of drought and heat, the topsoil blew off and ruined crop production for years into the future. The years 1934 and 1936 were the most dramatic volatility of the weather that we’ve seen in a couple hundred years in this country.”

Indeed, as bad as 1934 was, 1936 may have been worse. High-temperature records that still stand to this day were set in 13 states, including 121 degrees in Kansas and North Dakota, and 120 degrees in Oklahoma, Texas and South Dakota.

Intense heat, expanded the number of areas facing drought conditions and massive dust storms resulted in official estimates of at least 5,000 deaths nationwide that summer of 1936.

“I think a lot of deaths were unreported because they did not classify deaths the way we do today,” said Myers. “It may have been 50,000 people.

“The longevity of a heat wave has a big effect,” Myers said. “Your body has a certain amount of resiliency, but the longer the heat wave goes, the more it creates a stress on your body and the more it takes out of you. That’s why the death toll accelerates with the length of a heat wave. It’s not only how hot it gets, but how long it lasts.”

The heat and drought “gave new energy to the smothering dust storms that blackened skies,” according to The Old Farmer’s Almanac. The Dust Bowl area covered 300,000 square miles, and dust-filled skies carried soil as far as the entire Eastern Seaboard. Trains missed scheduled stops because they couldn’t see the towns as they passed through them, the doors and windows of homes had to be sealed to keep out the dust, and ceilings collapsed from the weight of dust that had collected in attics.

It was the final straw for many Midwestern farmers. The serious health impact of the pollution, extreme heat and drought of the 1930s led to a mass exodus from the middle of the country east and west, as dramatized in John Steinbeck’s Pulitzer Prize-winning novel “The Grapes of Wrath.”

One Oklahoma farmer, in correspondence with a friend in Maryland, shared how the conditions weighed on her.

“On days like this,” Carolina A. Henderson wrote, “when William Vaughn Moody’s expression ‘dust to eat’ suggests a literal danger, we can’t help questioning whether the traits we would rather think of as courage and perseverance are not actually recklessness and inertia. Who shall say?”