The bullet-proof ambulances will drive into Ukraine from neighboring Poland and will be able to operate even under fire.
By Naama Barak March 22, 2022
Facebook
Twitter
Linkedin
Email 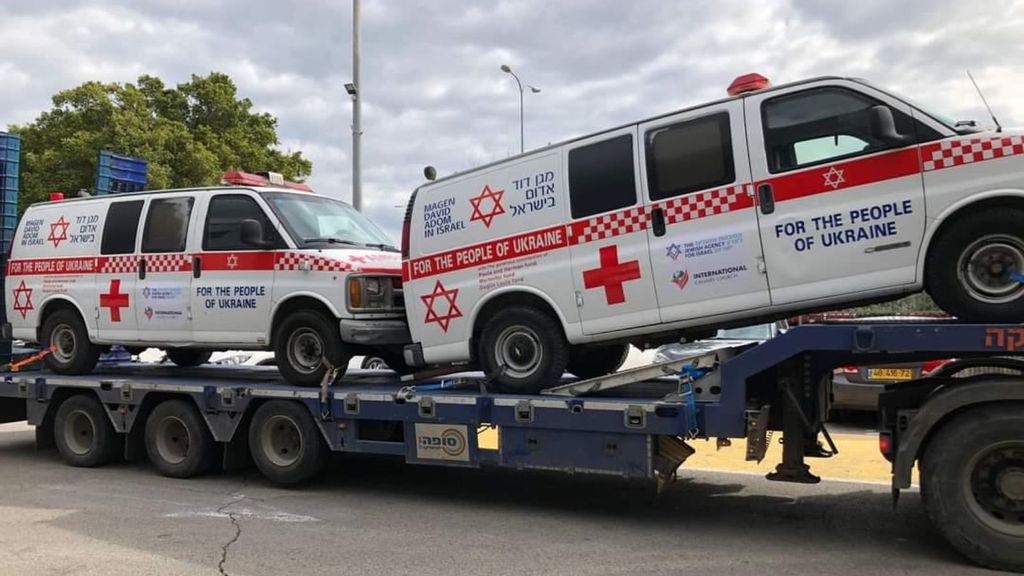 Magen David Adom armored ambulances make their way to Ukraine to help evacuate the wounded from the warzone. (Courtesy of MDA)

The four bullet-proof ambulances have previously served MDA in Israel during wars and other conflicts. They were flown to Poland aboard a Lufthansa cargo jet and will be driven into neighboring Ukraine for evacuation operations.

“MDA paramedics and EMTs, at times risking their own lives, have saved the lives of many patients while using these ambulances,” MDA director general Eli Bin said ahead of the ambulances’ send-off.

“Today, after they have ended their service with MDA to the Israeli people, they are making their way to Ukraine as part of the large humanitarian response being sent by MDA to benefit the civilian population there. Using these ambulances, medical teams in Ukraine will be able to save civilian lives, even under fire,” he added.

MDA is also sending Russian- and Ukrainian-speaking paramedics to Moldova to staff a triage clinic and assist injured and ill Ukrainians at the border. In Israel, it is staffing a humanitarian hotline with Russian and Ukrainian speakers to help the Ukrainian refugees who arrived in the country locate missing relatives, navigate the social and governmental agencies for needed services and provide medical assistance.

“We are working vigorously to ease the trauma experienced by the refugees who have been torn from their homes and families,” Bin says. “We hope to reunite them with loved ones and provide them with some comfort and closure.”

The ambulance airlift was made possible by the efforts of the Ministry of Foreign Affairs, the Israeli Embassy in Ukraine, the Jewish Agency, DHL, the Aviation Authority, and donations from American Friends of Magen David Adom and a Christian organization in South Korea.

Since fighting broke out in Ukraine, multiple Israeli aid organizations and companies have sent emergency personnel teams and equipment to the country and have helped evacuate people in need.