Don’t Be Fooled By Spring Warmth. The Polar Vortex Will Be On The Move

For much of the Northeast and part of the Midwest, chilly days will outnumber mild days into the beginning of April.
By Alex Sosnowski March 22, 2022
Facebook
Twitter
Linkedin
Email 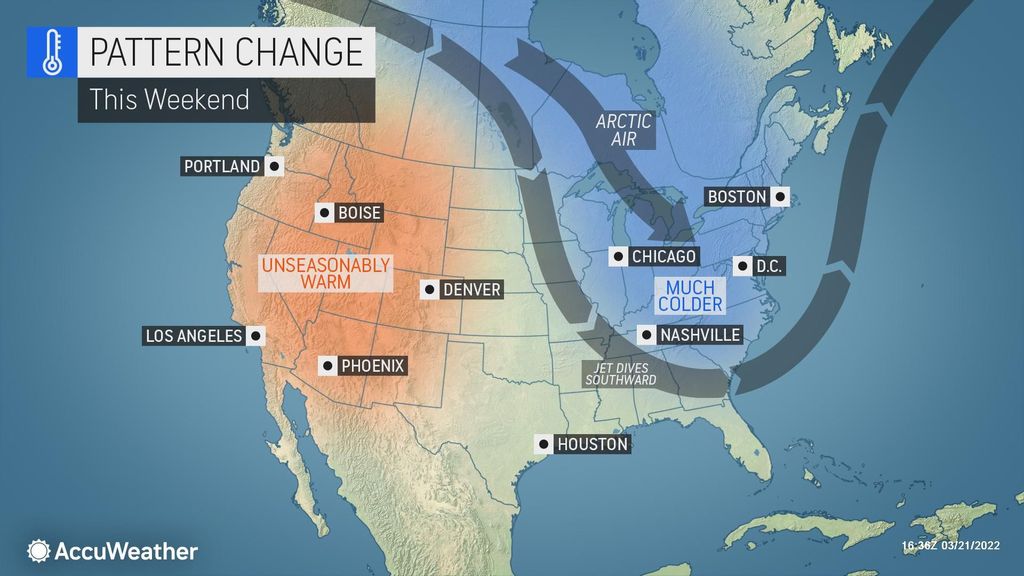 The first stretch of chilly air will settle into the Northeast Wednesday and Thursday in the wake of a big storm, according to AccuWeather Senior Meteorologist Joe Lundberg. (AccuWeather)

A consistent stretch of warmth that gripped the northeastern United States through the first full day of spring Monday may have fooled many into thinking warmth is here to stay.

However, AccuWeather forecasters say that changes in the weather pattern and the polar vortex will direct frequent waves of chilly air into the region during the remainder of March and early April. Snow may even occur on more than one occasion amid colder weather.

Temperatures climbed above average from Monday, March 14, to Monday, March 21, making it the longest string of days with above-normal warmth over the past three months in the Northeast. Most days brought highs in the 40s and 50s F across the northern tier and highs in the 60s and 70s farther south in the central Appalachians, mid-Atlantic and southern New England. Highs during this time of year typically range from the mid-30s in northern Maine to the mid-50s around the Chesapeake Bay.

Much of the winter featured wild swings in temperatures every few days, and the last stretch of warmth as lengthy as the recent one occurred ahead of the official start of winter.

AccuWeather forecasters say the upcoming pattern will usher in more notable temperature fluctuations, with the possibility that chilly days will outnumber mild days into the beginning of April.

“Thanks to a developing atmospheric traffic jam near Greenland, the jet stream is about to get some sizable buckles in it,” AccuWeather Lead Long-Range Meteorologist Paul Pastelok said. The jet stream often marks where colder air lies to its north from milder air to its south. Meanwhile, another sign of colder weather to come has captured the interest of AccuWeather long-range forecasters.

“The polar vortex has been showing signs of weakening and splitting apart as well,” Pastelok said. When the polar vortex is in a strong phase, it tends to hover near the North Pole and keep much of the coldest air locked up near and north of the Arctic Circle. But, when the polar vortex weakens, there is often a southward discharge of much colder air.

“It appears that at least some of that cold air will take aim at southeastern Canada, the northeastern U.S. and part of the Midwest for the latter part of March,” Pastelok said. The southward movement of cold air will be assisted by a significant amount of snow on the ground over portions of central and eastern Canada.

“That air will not warm up as fast as if there was no snow on the ground,” Pastelok explained.

The first stretch of chilly air will settle into the Northeast Wednesday and Thursday in the wake of a big storm, according to AccuWeather Senior Meteorologist Joe Lundberg. That potent storm that will usher in cooler weather is the same one responsible for triggering a destructive severe weather and tornado outbreak across the South.

Temperatures will rebound a bit from Friday into Saturday. Highs will climb 5-10 degrees above average in most locations of the Northeast, Lundberg said. However, that mild break will not last.

Part of the polar vortex may break off and take up residence over southeastern Canada and the northeastern U.S. later this weekend and into much of next week, but it will fluctuate in strength while it sits over the region. As a result, cold air may move in and out of the region a few times into early April. A few days may feature highs in the 30s in the Northeast, including over the higher elevations, around lakes Erie and Ontario, and along the St. Lawrence Valley that borders Canada. Highs will mainly be in the 40s at lower elevations, such as along the coast of New England and the upper mid-Atlantic.

Throw in breezy to windy conditions on some of those days, and AccuWeather RealFeel® Temperatures can dip into the 20s and even the teens at times from later this weekend to next week. For those with outdoor plans ranging from walking to jogging or even early-season gardening, most of those days are unlikely to be pleasant.

There is also the possibility that just enough cold air may be around during that period to allow episodes of snow showers or possibly even a period or two of wet snow over the interior Northeast that may even reach all the way to coastal areas of New England and the upper mid-Atlantic. It is possible that enough snow may accumulate that some people may need to shovel on one or two occasions next week.