Wednesday will bring another round of severe weather, once again including the potential for a few tornadoes.
By AccuWeather March 22, 2022
Facebook
Twitter
Linkedin
Email 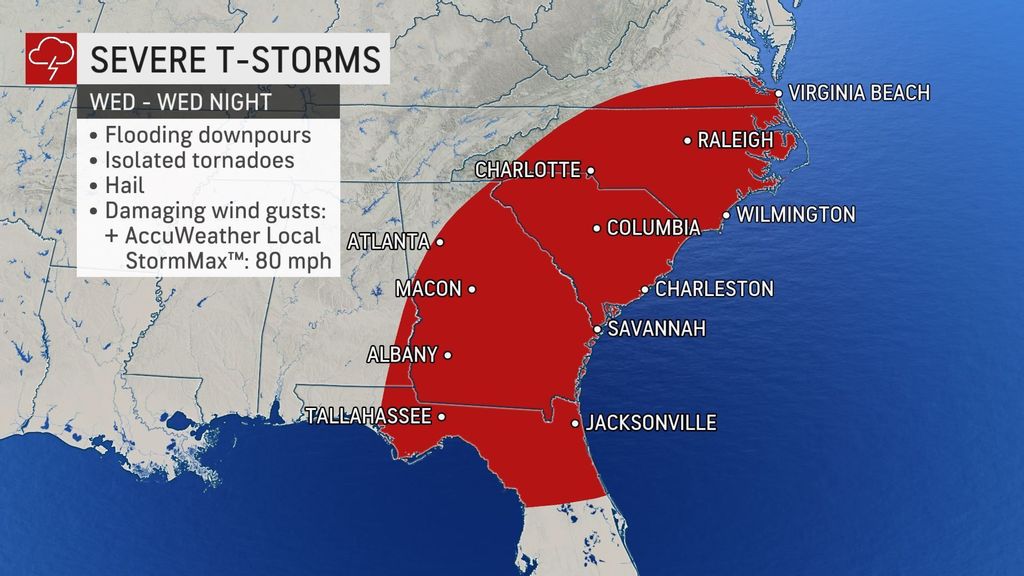 Thunderstorms that will pass over Mississippi and Alabama Tuesday night will be ongoing Wednesday morning, perhaps in a weakened or weakening state. (AccuWeather)

A major multiday severe weather outbreak that spawned tornadoes in Texas and points east will continue in the Southeast Wednesday, AccuWeather forecasters say. The day will bring another round of severe weather, once again including the potential for a few tornadoes, from northern Florida to eastern Virginia and perhaps southeastern Maryland. A second batch of severe thunderstorms is also anticipated hundreds of miles farther to the northwest.

“The risk of severe thunderstorms on Wednesday may be short-lived compared to prior days during the outbreak since the atmospheric energy that was producing the dangerous conditions to this point will be departing,” AccuWeather Lead Long-Range Meteorologist Paul Pastelok said.

Thunderstorms that will pass over Mississippi and Alabama Tuesday night will be ongoing Wednesday morning, perhaps in a weakened or weakening state. The most likely time for thunderstorms with torrential downpours, gusty winds and vivid lightning in the Atlanta metro area will be early Wednesday morning.

People in this part of the Southeast should be prepared for disruptive to locally dangerous weather conditions including strong wind gusts, hail and flash flooding. A couple of tornadoes cannot be ruled-out as well.

In addition to the southeastern United States, AccuWeather forecasters are growing concerned about a secondary area of severe weather Wednesday. Severe thunderstorms are forecast to fire up Wednesday afternoon across a significant portion of the Ohio Valley.

A wide swath from eastern Indiana to Kentucky, West Virginia and southwestern Pennsylvania will be at risk for storms that can produce damaging wind gusts, torrential rainfall and even an isolated tornado or two. Residents of major metros like Louisville, Kentucky; Cincinnati and Columbus, Ohio; and Pittsburgh will all need to keep an eye to the sky for rapidly changing conditions Wednesday afternoon and evening.

There is the possibility of another spike in severe weather along part of the Atlantic coast on Thursday if a storm forms along a cold front that slows and stalls over the Southeastern states, forecasters say.

“At this time, locally damaging winds and brief, heavy downpours appear to be the main threat with any stronger storm that roars to life on Thursday,” AccuWeather Meteorologist Mary Gilbert said.

At the very least, showers and thunderstorms will stretch from eastern North Carolina to portions of the Florida Peninsula on Thursday.

«Previous Post
Don’t Be Fooled By Spring Warmth. The Polar Vortex Will Be On The Move»Next Post
Tornado Wreaks Havoc In New Orleans, Leaves At Least 1 Dead