“There are many reasons for the Russians' abysmal performance” in the war, says former U.S. military leader.
By Joseph Golder March 21, 2022
Facebook
Twitter
Linkedin
Email 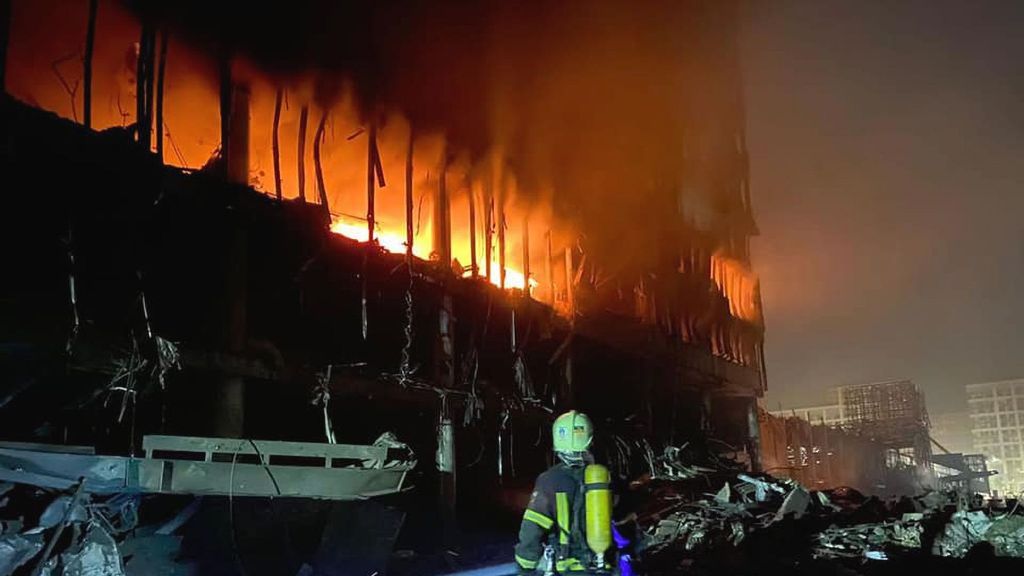 A shopping mall in Kyiv, Ukraine, is seen on fire after Russian shelling on March 20, 2022. (@MNS.GOV.UA/Zenger)

The Russian military’s bombing of a shopping center in Kyiv killed at least eight people and set off a huge explosion with firefighters and rescue crews cutting through rubble with angle grinders to save trapped people.

Footage shared by the State Emergency Service (SES) of Ukraine shows firefighters rescuing a person who appears to be alive after the March 20 bombing in the Ukrainian capital. Other images show a man being carried on a stretcher.

Rescuers who arrived on the scene established that the damage was the result of enemy shelling. The vehicles in the parking lot and three to four floors of the shopping center caught on fire, the SES said in a statement accompanying the video.

The graphic images show firefighters cutting through the rubble to rescue a person whose hand can be seen protruding from the destroyed building.

The Ukrainian emergency service said on the Telegram messaging app that 63 people were involved in the rescue operation. It also said the amount of damage done and the number of victims involved were still being determined.

In interviews with CNN on March 13 and 14, U.S. retired General David Petraeus, who commanded U.S. forces in Iraq and Afghanistan, said “there are many reasons for the Russians’ abysmal performance” in the war against Ukraine.

“First of all, they’re fighting against a very determined, quite capable Ukrainian force that is composed of special ops, conventional forces, territorial forces and even private citizens, all of whom are determined not to allow Russia to achieve its objectives,” Petraeus told CNN national security analyst Peter Bergen.

“They are fighting for their national survival, their homeland and their way of life, and they have the home-field advantage, knowing the terrain and communities,” Petraeus said of what some analysts see as the surprisingly strong performance of the Ukrainians.

Despite the Russian forces outnumbering the Ukrainian army, many Ukrainian civilians have taken up arms to fight and to provide logistical support to the Ukrainian military.

When Bergan asked whether urban warfare favored the Ukrainians, Petraeus said: “Very much so.”

“Usually, the rule of thumb for urban warfare is that it requires at least five attackers to every defender, he said. ”In this case, I’d argue it may be more than that because the Ukrainians are so resourceful. They will work together to prevent the Russians from taking urban areas the way that infantry and combined arms normally would do, such as the way the United States military cleared and then held cities during the Iraq War.”