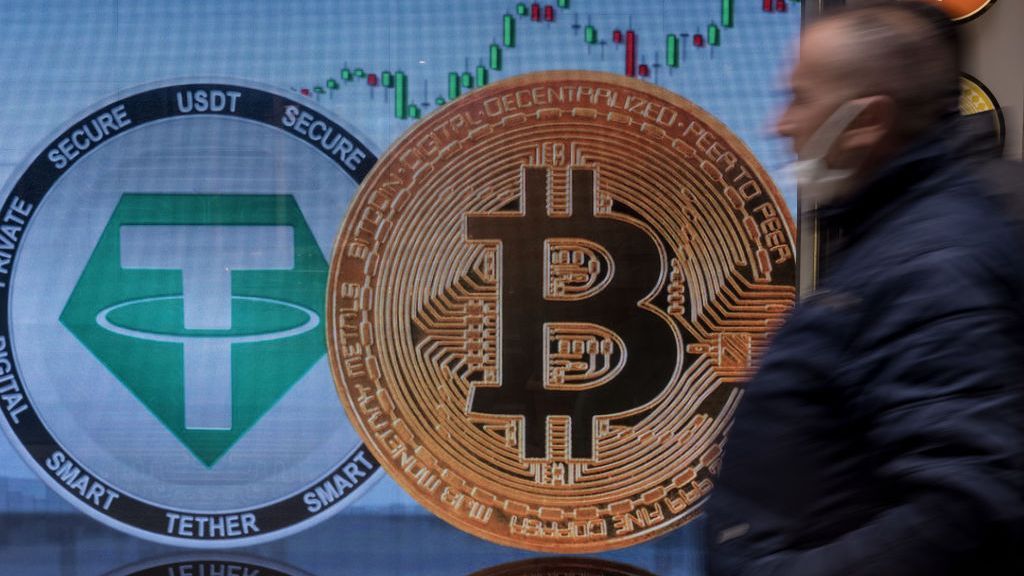 The use of cryptocurrencies was a part of the Ukrainian strategy right from the start of the war, when government officials used Twitter accounts to share details of two crypto wallets, where donations could be made. File photo. (Chris McGrath/Getty Images)

Cryptocurrencies have been helping to raise millions of dollars for the Ukrainian government as it fights off a Russian invasion.

The use of cryptocurrencies was a part of the Ukrainian strategy right from the start, when government officials used Twitter accounts to share details of two crypto wallets, where donations could be made.

The provision of two addresses was to reflect different uses for the funds, with one for contributions to the country’s war efforts, and the other for providing humanitarian aid for people whose lives have been devastated by the war.

By just four days after the invasion, they had managed to raise $10.2 million (9.2 million euros).

And the success story continued, with the amount then rising to $100 million with the help of the ‘Crypto Fund for Ukraine’, which is run by Michael Chobanian, founder of the first Bitcoin agency in Eastern Europe and among members of the Commonwealth of Independent States.

He told news agency AFP that the majority of crypto donations came in the form of Bitcoin, Ethereum and Tether, with Tether pegged one-to-one to the U.S. dollar.

The money donated, while significant, nevertheless paled in comparison with the vast amounts donated in aid from foreign countries. Nevertheless, it was still hailed as a success after it gave members of the public the opportunity to also support Ukraine in its bid to fight off the Russian invasion.

In particular, it was the opportunity for people more experienced with cryptocurrencies from the younger generation to get involved in making donations to the Ukrainian cause.

Chobanian is the man behind the Ukrainian crypto exchange ‘Kuna‘ and was credited with bringing in 60 percent of all contributions that were received.

He confirmed that the money was split between the two funds for different reasons. He said one was used to provide food, and protective clothing, including bullet-proof vests and helmets, for people.

The other, he said, was being used to buy weapons to support the work of the Ukrainian army.

But the early split between the funds ended when they were combined later so that all of the money could be used to support the work of the military in fighting off the Russian invasion.

And while aid packages sent to Ukraine from the United States and the European Union dwarf the sums made in cryptocurrency donations, it was still praised, as it allowed individuals to get involved.

In a time when the Ukrainian currency, the hryvnia, has been plummeting in value, the comparatively steady exchange rate for cryptos has also proved an added bonus in the cash-strapped country in meeting the needs of its military defense against the Russian invasion.

Cryptocurrency bank transfers to settle debts and pay invoices are often faster than bank transfers, which can frequently take from 24 hours to three days to be completed.

The Ukrainian deputy minister for digital transformation had previously indicated that Ukraine would be interested in starting its own cryptocurrency. However, the plan to gain solidarity with a symbolic gesture of support for the country was later put on ice.

That proved an opportunity for scammers to step in and offer what was ultimately a fake version of the coin that the government had planned to issue.

Chobanian said at the time the decision was announced that it was the first day of the war and there was a lot of chaos, and that coupled with bad communication, resulted in some mistakes.

The positive benefit on this occasion is that cryptocurrency has shown it can be a force for good and has, in part, managed to assuage concerns over its role in the Ukrainian underworld, where it helps to oil the cogs of online crime, as well as tax dodging and the export of capital.

With regard to the latter, the data analytics firm Chainalysis noted that there was a high volume of trades being done from Eastern Europe, and indicated that “capital flight” was one of the main reasons for the hyperactivity.

Chobanian, however, played down the concerns over the future of cryptocurrencies in the future of the Ukrainian economy by saying that given time, it could work well.

He said that once the war was over, rebuilding Ukraine could involve using blockchain technology, which was something that the entire country had been helping to build.

He was backed up in a statement by the country’s president Volodymyr Zelensky, who has already rubber-stamped a bill that would legalize and empower a legislative structure for the trading in cryptocurrencies, and to allow people to use them legally within the country.

Caroline Malcolm, who is head of international public policy and research at Chainalysis, told AFP that the activities of Ukrainian politicians were also encouraging other governments to embrace cryptocurrencies for constructive projects.

She said that the Ukrainian experience is, to date, generating positive feedback, which could help to develop a model for future regulatory policies.

U.S. President Joseph R. Biden Jr. has recently signed an executive order in which he tried to get more clarity on the question of crypto regulation, signaling that the government is looking to become more involved in possibilities for cryptocurrencies.