Temperature Swings To Mark First Week Of Spring In Northeast

Forecasters expect a few more days with a chill in the air into the end of the month, sandwiched between milder days.
By Renee Duff March 21, 2022
Facebook
Twitter
Linkedin
Email 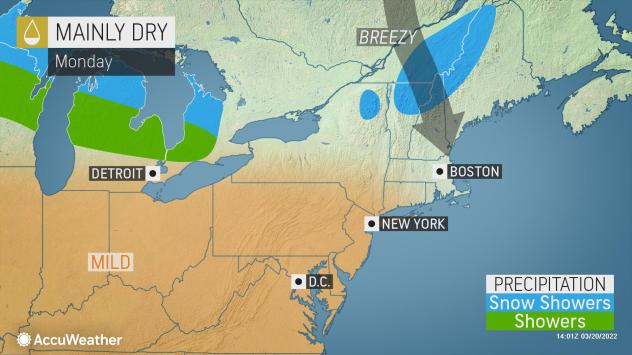 Although spring has officially begun, AccuWeather meteorologists say the flip of the calendar will fail to translate to an extended stretch of mild weather for some of the Northeastern states, with a see-saw temperature pattern forecast into the end of March. (AccuWeather)

Although spring has officially begun, AccuWeather meteorologists say the flip of the calendar will fail to translate to an extended stretch of mild weather for some of the Northeastern states, with a see-saw temperature pattern forecast into the end of March.

The new season officially sprung on Sunday, March 20, at 11:33 a.m. EDT, but not all residents of the Northeast were feeling spring warmth. Clouds and rain showers were holding temperatures in the 40s F across the interior to close out the weekend, with breezy conditions pushing AccuWeather RealFeel® Temperatures into the 30s at times. Just the day before, highs were in the 60s and 70s.

Forecasters expect a few more days with a similar chill in the air into the end of the month, sandwiched between milder, more seasonable days.

The first days of the week are forecast to be on the milder side with high temperatures near- to above-normal levels on Monday and Tuesday. A breeze across upstate New York and New England can make it feel cooler than the thermometer reading both of these days.

During the latter part of March, average temperatures range from the upper 30s and lower 40s in northern New England to the lower to middle 60s across the Chesapeake Bay region.

Much of the region will be dry for Monday and Tuesday, though forecasters say there will be a narrow strip of rain showers riding along the Pennsylvania-New York border during Monday night.

The next opportunity for more significant precipitation, as well as much cooler air, will arrive at the middle of the week.

“On Wednesday, attention will then shift to an approaching storm from the west,” Buckingham said.

This is the same storm that is on track to unleash a significant outbreak of severe weather across the South, as well as snow in the Rockies and High Plains.

Wednesday could turn out to be a downright raw day due to the combination of rain and temperatures stuck in the 40s and 50s across the Northeast. A wind off of the cool Atlantic Ocean will contribute to the damp and bleak conditions.

“If cold enough air can get wedged into place across the Poconos and Catskills, it is possible for precipitation to start as a bit of a wintry mix,” Buckingham said.

If any wintry precipitation occurs, it is likely to be brief with a majority of the region’s travelers facing wet roadways with reduced visibility from blowing spray. Upstate New York and northern New England are the most likely areas to face snow and/or a wintry mix for the storm’s duration and slippery travel concerns from Wednesday night into Thursday.

Airline travelers from Washington, D.C., to New York City could face delays due to a low-cloud ceiling and the wet conditions.

Farther to the south from near the Delmarva Peninsula to the Carolinas and into the Florida Panhandle, severe weather could be a potential at midweek. It is in this corridor that the sun can break out for a few hours, heat up the atmosphere and create conditions conducive for feisty thunderstorms.

Behind the storm, forecasters say there will be another burst of mild air sweeping through the mid-Atlantic on Thursday, with the weather pattern heading into the final days of March likely to continue the up-and-down temperature trend across the region.

Another storm system could dive down from Canada by next weekend, which may keep the chance for a few showers and cool conditions in place across the Northeast, according to Buckingham.

Depending on the magnitude of the cool air plunging southward, forecasters say there could even be some snowflakes flying in the air for the last weekend of March.