Dangerous Storms, Tornadoes To Threaten A Dozen States Across South

More than 50 million Americans are at risk for violent and life-threatening thunderstorms.
By Alex Sosnowski March 21, 2022
Facebook
Twitter
Linkedin
Email 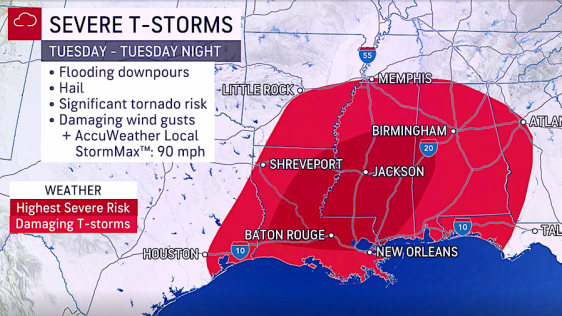 More than a dozen states from the southern Plains to the Southeastern coast are facing some type of severe weather risk. (AccuWeather)

More than a dozen states from the southern Plains to the Southeastern coast are facing some type of severe weather risk, but the most significant concern is the potential for a widespread tornado outbreak to unfold across parts of the South on Tuesday. The severe weather outbreak will pose a significant risk to lives and property through the middle of the week.

“This setup has the potential to produce strong and long-lived tornadoes, some of which can occur at night,” AccuWeather Senior On-Air Meteorologist Michelle Rotella said. Forecasters say people are urged to closely monitor the situation and have a way to receive weather alerts throughout the day and night.

Along with the tornado risk, some of the storms will produce damaging hail ranging from the size of golf balls to baseballs, powerful winds with AccuWeather StormMax™ gusts between 80 and 90 mph, frequent lightning strikes and flash flooding.

Large portions of Texas, Oklahoma, Arkansas and Louisiana will be at risk for severe thunderstorms into Monday night, but, within that area, a more focused space that includes San Antonio, Houston, Dallas, and Shreveport, Louisiana, may be where the strongest storms erupt into Monday night.

“The greatest risk of storms with large and damaging hail is likely to be on Monday,” AccuWeather Chief On-Air Meteorologist Bernie Rayno said.

The National Weather Service’s Storm Prediction Center said there is an enhanced risk for severe thunderstorms on Monday and mainly in parts of Texas and northwestern Louisiana. More than 15 million live in the area covered by the enhanced risk.

Moisture began to flow northward from the Gulf of Mexico Monday morning after dry air spread from west to east over the South Central and Southeastern states this weekend. This surge of moisture, combined with strong jet stream winds, will allow thunderstorm clouds to tower 8 miles, or about 42,000 feet, above the ground, with some extending even higher into the atmosphere.

When storms reach this high into the atmosphere, powerful wind gusts can be transported down to the surface by way of violent downdrafts, while strong updrafts can allow hailstones to reach an enormous size, often resulting in the formation of damaging hailstones.

As storms shift eastward across portions of the central Gulf Coast and the lower Mississippi Valley regions on Tuesday, the threat of multiple and strong tornadoes will increase.

Some of the tornadoes that occur on Tuesday might last more than a couple of minutes and could be on the ground for several miles. In some cases, the tornadoes could be concealed by low clouds, rain and even the dark of night. The greatest threat of tornadoes will extend from southern Louisiana to much of Mississippi and western Alabama.

The SPC categorizes thunderstorm risk on a scale of 1 to 5 from “marginal” to “high.” A moderate risk has been issued for Tuesday which is the fourth-highest risk category issued by the SPC. This area covers a population of more than 2 million and includes cities such as Baton Rouge, Louisiana, and Jackson and Hattiesburg, Mississippi.

One factor that could limit severe thunderstorms through Tuesday may be an expanding zone of cloud cover that could limit the amount of daytime heating that is able to occur. In places where clouds fail to break, any storms that develop are apt to have limited intensity, and there’s always the possibility that the lack of daytime heating could be enough to prevent severe thunderstorms from occurring in the first place.

This same area under the spotlight for severe thunderstorms, as well as locations farther north, will also be at risk for heavy rainfall that can cause flash flooding on small streams and around urban locations. The copious rainfall could also produce significant rises on some of the rivers.

Around 2-4 inches of rain is forecast for a broad area with an AccuWeather Local StormMax™ total of 8 inches possible as well. Through Tuesday night and into early Wednesday morning, the risk of flooding will be greatest from the central Gulf Coast northward to much of Kentucky and the southern portions of Indiana, Illinois and Missouri, as well as the western parts of Virginia and North Carolina.

Flash flooding can create dangerous conditions for motorists, especially for those venturing on secondary roads at night, when it may be difficult to see high water due to terrain and lighting conditions, experts say.

The risk of severe thunderstorms will not end on Tuesday — it will simply shift to places farther east. Wednesday will bring another round of severe weather, once again including the potential for a few tornadoes, from northern Florida to eastern Virginia and perhaps southeastern Maryland.

“The risk of severe thunderstorms on Wednesday may be short-lived compared to prior days during the outbreak since the atmospheric energy that was producing the dangerous conditions to this point will be departing,” AccuWeather Lead Long-Range Meteorologist Paul Pastelok said.

People in this part of the Southeast should be prepared for disruptive to locally dangerous weather conditions including strong wind gusts, hail and flash flooding.

There is the possibility of another spike in severe weather along part of the Atlantic coast on Thursday if a storm forms along a cold front that slows and stalls over the Southeast states, forecasters say.