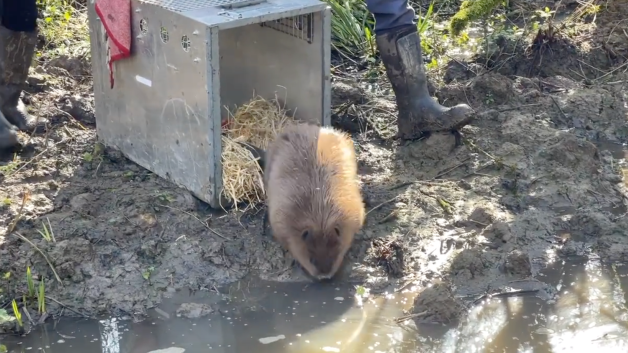 Beavers haven’t roamed the streams and woods of London since the days of William Shakespeare. But after over 400 years of extinction, the rodents are being reintroduced to the United Kingdom capital in a “quite emotional” moment.

A pair of beavers, temporarily named Justin Beaver and Sigourney Beaver, were released into a designed enclosure on Forty Hall Farm in Enfield on March 17. The beavers are part of a two-year plan by Enfield Council to combat the increase in major flash floods that have plagued the city in recent years.

In February, Bob Ward, deputy chair of the London Climate Change Partnership, said the flood risks have turned life-threatening due to the city’s outdated drainage system.

“There is now a real risk of people drowning, particularly in basement flats if a major flash flood occurred in the middle of the night,” he told the Observer. “The problem is particularly worrying because we have no idea how many people live in basement properties in London.”

In a city analysis from July 2021, a report from the London Councils taskforce found that the city was dealt more than a month’s average rain on several different days. The month’s enormous rainfall triggered the closures of major hospitals and underground train stations and caused flooding in over 1,000 homes.

The hope for the introduction of the beavers is that the natural engineers will build dams and restore habitats that help slow down and filter water in the city’s wetlands. By cutting down trees and attracting other forms of wildlife, officials hope the restoration efforts lead to reduced downstream flooding.

“They’re not just beautiful creatures, they’re so good in the ecosystem, they encourage other animals and insects because of the ponds and dams they make,” Ian Barnes, Enfield Council’s deputy leader, told The Guardian.

Conservation leaders hope the pair will reproduce in the coming months as the organizations wait on the government to approve applications to release the animals into the wild.

London Mayor Sadiq Khan celebrated the release of the beavers into the enclosure with a video on Twitter.

Great to see @EnfieldCouncil welcome beavers to their wetlands as part of a series of projects designed to help rewild the area. 🦫

Today City Hall has awarded £600,000 from our Rewild London Fund to projects across our city that will help restore nature.pic.twitter.com/WDcNHubrob