Five people honored, with the president saying they are doing the same as members of the military.
By Joseph Golder March 20, 2022
Facebook
Twitter
Linkedin
Email 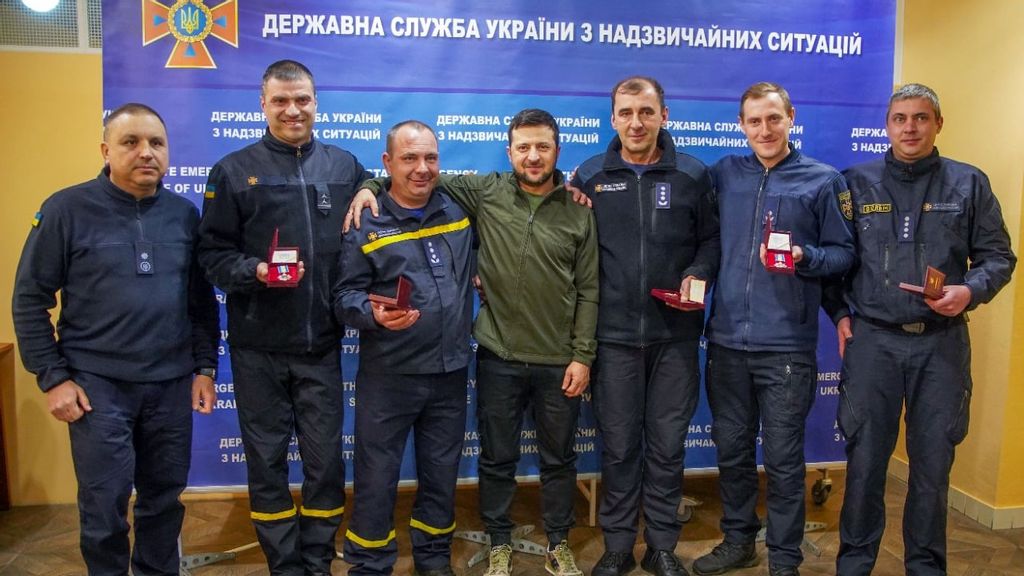 Ukrainian President Volodymyr Zelensky has honored five emergency service workers for their bravery during the Russian invasion of Ukraine with medals.

“Five SES staff members were honored ‘for courage’ of the III degree by Ukrainian President Volodymyr Zelensky,” the State Emergency Service (SES) of Ukraine said in a post sharing the images of the honorees on March 17.

“Congratulations to our colleagues for their well-deserved award!” the SES statement says.

“We respect your work and understand that you are doing the same now as our military. Ukraine is grateful to each and every one of you,” the Ukrainian president told the medal recipients.

In the footage, Zelensky is first seen entering a room accompanied by a soldier in full combat gear and sporting an assault rifle along with members of his staff before he greets the five awardees and shakes their hands.

The emergency workers, who can be seen sporting Ukrainian flags on their uniforms, heartily shake their president’s hand in return.

Zelensky, who was a comedian portraying a president in a popular TV series before he actually won Ukraine’s 2019 presidential election with 73 percent of the vote, then thanks them for their service and hands each one a medal for their bravery.

The five golden medals can be seen up close in the footage, sitting in adorned red boxes.

The Ukrainian president, who told the U.S. government officials “I need ammo, not a ride,” when they offered to evacuate him from the Ukrainian capital, Kyiv, at the beginning of Russia’s invasion, poses with the medal recipients and an unidentified young child in military fatigues as the footage ends.

The frequently heroic efforts of Ukraine’s emergency service workers in rescuing people from burning buildings, treating the wounded and helping provide safe passage for those fleeing the Russian bombardment have garnered media attention around the world.

In one of many horrifyingly similar scenarios, Ukrainian emergency service workers cut residents out of their apartments and led them to safety in a Kyiv neighborhood on March 17 after a downed missile hit their building. One person was killed and three were wounded in the incident.

In another case, dozens of firefighters in Kharkiv, Ukraine’s second-largest city, battled for hours a huge March 16 blaze set off by Russian shelling in the city’s market area.

Preventing future devastating fires and explosions has been the focus of Ukrainian National Police bomb squads. They have detonated at least 350 explosive devices left behind by Russian soldiers during a war now in its fourth week.