There have been 18 major downtown districts hit with tornadoes since 1970.
By Thomas Leffler March 20, 2022
Facebook
Twitter
Linkedin
Email 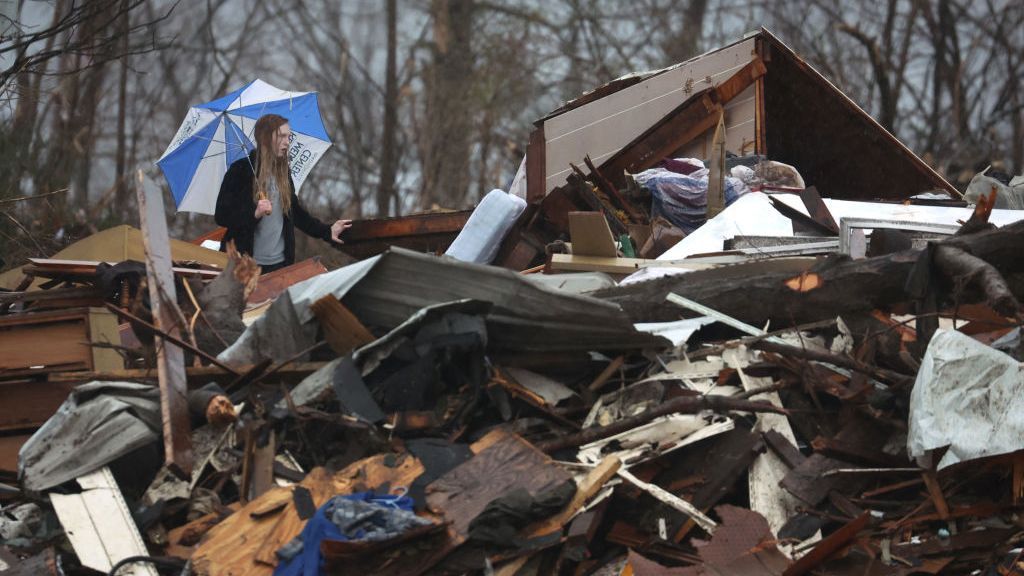 Loren Grable searches in the rain for mementos in rubble that was once her grandparent's home before it was destroyed during last week's tornado on Dec. 16, 2021, in Dawson Springs, Kentucky. She found the umbrella that once belonged to her grandfather in the debris. Multiple tornadoes touched down in several Midwest states March 10, causing widespread destruction and leaving scores of people dead and injured. (Scott Olson/Getty Images)

Tornadoes are always a key severe weather event to watch out for and are typical of the Southeast and Midwest regions during the spring and summertime. However, there are new warnings that even more “threat areas” could be on the horizon.

Per the National Weather Service Storm Prediction Center there have been 18 major downtown districts hit with tornadoes since 1970. One of these was a Fort Worth, Texas, tornado, which “transformed” the city skyline when it tore up buildings on March 28, 2000. Two lives were lost during the severe weather and 80 suffered injuries.

At the time, the tornado was categorized with F-2 strength, blowing thousands of windows off of 35-story building The Tower (formerly Bank One Tower). Other high-rises in the Fort Worth area also had windows blown out due to the event, and the 6-story Cash America building was nearly destroyed.

Over 20 years after the deadly tornado, one AccuWeather forecaster states that future incidents may hit hard in other major markets. AccuWeather Lead Long-Range Forecaster Paul Pastelok said that tornado season and tornado threat areas are “evolving” due to changes in climate.

A more recent instance of a tornado hitting a major city was in Nashville, Tennessee, in March of 2020. The city was one of many in Tennessee hit by the fierce weather, featuring winds up to 175 miles per hour.

Pastelok then spoke on how to best prepare to deal with an approaching tornado event, particularly for those living in high-rises like the ones torn apart in Fort Worth. For residents of high-rises, the two key points of advice are to take tornado warnings seriously, as well as making sure to get to an interior room on a lower floor and staying away from windows. Tornadoes striking at night adds to the challenge, as previous AccuWeather reporting states, prompting the need to have a plan in place when the severe event occurs.