An outbreak of tornadoes struck from Arkansas to Iowa to Ohio, and several alerts didn't reach residents for two to seven minutes.
By AccuWeather March 19, 2022
Facebook
Twitter
Linkedin
Email 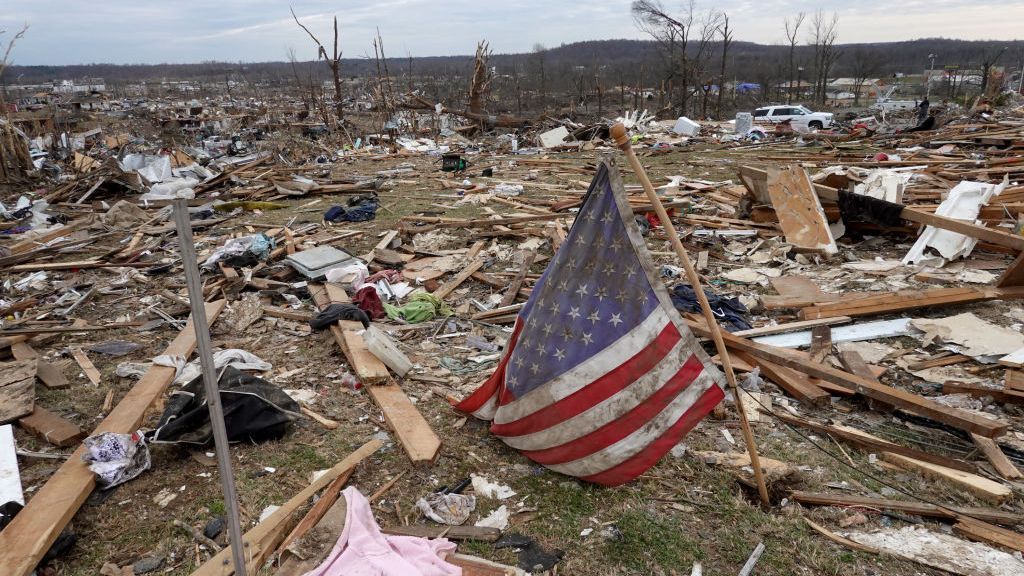 Three U.S. Senators are proposing new legislation in response to the National Weather Service (NWS) communication platforms experiencing a delay in disseminating alerts, which impacted the delivery time of tornado warnings to certain services amid an outbreak of deadly severe weather earlier this month.

It’s dubbed the Tornado Observations Research and Notification Assessment for Development of Operations Act, or the TORNADO Act.

Sen. Chuck Grassley and Sen. Joni Ernst of Iowa, both Republicans, along with Sen. Roger Wicker of Mississippi, also a Republican, introduced the act this week that, if passed, would establish an office to improve the communication of alerts, establish a pilot program to test the effectiveness of implementing new techniques for hazardous weather communication and require the National Oceanic and Atmospheric Administration (NOAA) to take measures that would target improving forecasting and storm assessment.

In addition, U.S. Rep. Ashley Hinson of Iowa, a Republican, and U.S. Rep. Cindy Axne of Iowa, a Democrat, co-wrote a letter to NWS acting director Mary Erickson asking for the service to formally explain what caused the delays and to layout a plan to fix the issues moving forward.

During the recent devastating storms & tornadoes across Iowa, critical public safety alerts from @NWS were delayed. Every minute counts when severe weather strikes.@RepCindyAxne & I are asking @NWS to explain what happened & lay out a plan to fix these issues going forward. pic.twitter.com/szPWS3scjF

However, meteorologists have long been asking for attention to be directed to strengthening the NWS’s dissemination capabilities.

“It’s great to see lawmakers interested in the country’s ability to prepare, react and respond to tornadoes — however, I think the bill needs to have a much greater focus on strengthening the reliability of the National Weather Service’s dissemination capabilities, especially in light of the challenges that have been documented with NWS dissemination technology in many severe weather outbreaks in recent years,” AccuWeather Senior Vice President and Chief Meteorologist Jonathan Porter said.

Porter was among several figures in the weather industry to express immediate concern over the technical difficulties experienced by the NWS and the implications those may have for public safety.

He noted that since AccuWeather generates its own forecasts and warnings based on public and proprietary weather data, AccuWeather For Business warnings, which are sent to clients, were not impacted by the NWS data dissemination issue on March 5.

On March 5, an outbreak of severe weather spawned tornadoes from Arkansas to Iowa to Ohio, with the majority — and deadliest — across Iowa. Several alerts issued by NWS meteorologists between the hours of 2 p.m. CST and 6 p.m. CST didn’t reach residents for two to seven minutes. The longest delay occurred around 4:11 p.m. CST. Roughly 20 minutes later, an EF4 tornado tore through Winterset, Iowa, where it killed six people.

The issue, NWS director of public affairs Susan Buchanan told AccuWeather via email, stemmed from the agency’s satellite network becoming overloaded with the increase of messages during the storm. Employees at the Dallas-Fort Worth office, a hub location, had switched to the satellite network after a fiber optic cable had been damaged, adding to the number of messages being sent over the connection and bogging down the network’s ability to quickly send out alerts to people’s cellphones and post warnings on the National Weather Service’s website.

Buchanan added that despite the technological glitch, NWS forecasters were able to issue warnings with an average lead time, or the time interval between when a warning is issued and the tornado occurs, of roughly 20 minutes. The national average is 10 minutes, according to Buchanan.

The NWS activated the NOAA Weather Radio and the Emergency Alert System to broadcast warnings once they were issued, with some forecasters issuing warnings early to compensate for the delay in communications, Buchanan said. Other forecasters provided real-time decision support services through the NWS Chat and live-tweeting.

Madison County Emergency Manager Director Diogenes Ayala told AccuWeather that despite the delay, the county had been aware that it was under a threat of bad weather.

There was plenty of time to take cover, Ayala said, but “even if you had 50 minutes,” that didn’t change the fact that it was a dangerous EF4 tornado that touched down and tore a path of destruction.

“Public warnings issued by the National Weather Service are crucial for public safety and they are meant to be disseminated and viewed by users as soon as possible after they are issued,” AccuWeather Director of Forecast Operations Dan DePodwin said. “Any delay, such as in this case, could prevent some users from receiving the alerts prior to being impacted by severe weather.”

However, even with the fail-safes and redundancies in place, the primary concern remains that there were communication delays in a critical moment, especially since March 5, wasn’t the first time that the NWS experienced a problem with its dissemination systems.

“Significant technical issues” within the NWS’s information dissemination have been recorded all the way to 2013, according to The Washington Post.

“The delays in the NWS dissemination of tornado warnings in Iowa recently were yet another example in a series of situations where the NWS core data dissemination systems have experienced failures or serious degradation during severe weather events – when they are needed most,” Porter said. “A chain is only as strong as its weakest link – and right now the data dissemination capabilities of the NWS are a weak link, which is a major public safety concern.”

He added that this is a “grave concern” that has been highlighted previously by companies in the U.S. weather industry, broadcast meteorologists and even NOAA’s Environmental Information Services Working Group (EISWG), where Porter is an appointed member.

In a statement released by the EISWG in June 2021, the group found that growing information delivery challenges that the NWS were experiencing were likely from a growth in the demand for weather and climate-related data, a lack of infrastructure growth and modernization, the difficulty of working within “the constraints of government processes” and severely limited resources.

Buchanan told AccuWeather that one short-term option under consideration at the NWS was to implement the use of service backup in situations similar to what occurred on March 5, rather than use the satellite-based backup, to prevent message build-ups. Service backup occurs when one forecast office takes over forecasting responsibilities for another office until it can operate properly once more. She added that NWS officials were also considering other avenues to “quickly address the issue.”

Meanwhile, lawmakers on Capitol Hill who represent the people of Iowa indicated they want the issue addressed quickly and decisively

“We must act to minimize these tragedies moving forward,” Grassley said in a news release announcing the TORNADO Act.