VIDEO: A Rottweiler’s Guilty Reaction To A Ripped Up Toy Scores Big On TikTok 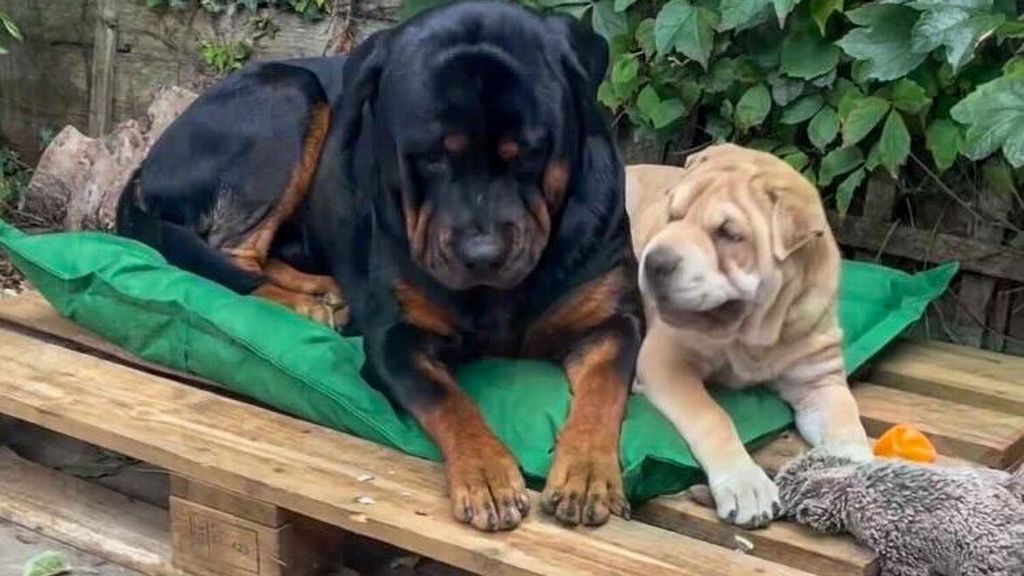 The two dogs, Rocky and Borcher from Oxford, England.  (@always.a.woman/Zenger)

Rocky the Rottweiler gives himself away after his owner asks which of her dogs ripped up the soft toy.

The cute scene, with Rocky’s guilty reaction, was shared by Rocky & Me on TikTok, where it went viral with 14 million views.

The footage was accompanied by the message: “Who did this? Answers on a postcard please.”

Dog owner Charlie Holt, who lives near Oxford, England, told Zenger: “Rocky is my 2-year-old Rottweiler. He’s my fourth Rottie, and I’ve had him since he was eight weeks old. He’s an incredible dog.

“Bodger is a Bull-Pei, his dad was a Shar Pei and his mother was an English bulldog. He wasn’t planned, but when I went to see him at nine weeks old, he was being kept in a car boot [trunk], so I had to bring him home. He’s just gone 11 months.

“We are always together, the local pubs, butchers, even the gym lets them in. They are well-known around town.”

She said the pups are not hard to care for, “aside from how much they eat and how heavy they are when they sit on your lap.”

“The video was just Rocky destroying his toy, he loves to pull out fluff,” she said.

“People argue dogs don’t feel guilty, but they know if they’ve done wrong. I don’t punish my dogs. They hate it if someone is mad at them, and they know they have done wrong. They get sent to a timeout, usually outside. But as you see from the video, they will do it themselves if they’ve been naughty,” Holt said.

“They have the closest relationship of anything or anyone I have ever seen, true soulmates from day one. If you watch any of my TikToks, you’ll see that’s what they are loved for.”

Rottweilers were bred to drive cattle to market. They were among the earliest police dogs and served with honor in the military. Bull-Peis are considered excellent companions, as well as guard dogs. The breed is easy to train and maintain. However, they are noisy, known to snore and bark.

Hold said: “I cook fresh food for them, liver, beef, lots of oily fish for their coats. Rocky is fearless until it comes to vacuum cleaners and brooms, while Bodger doesn’t do bad weather!

“I was a casino manager for years, but have left that now, due to Covid. I’m opening a little doggie daycare at my house in April.”