The Longer A Person Stays Fat, The More Likely They Are To Develop Bowel Cancer, Researchers Say

The risk is similar to the cumulative effects of smoking leading to lung cancer.
By Anamarija Brnjarchevska March 18, 2022
Facebook
Twitter
Linkedin
Email 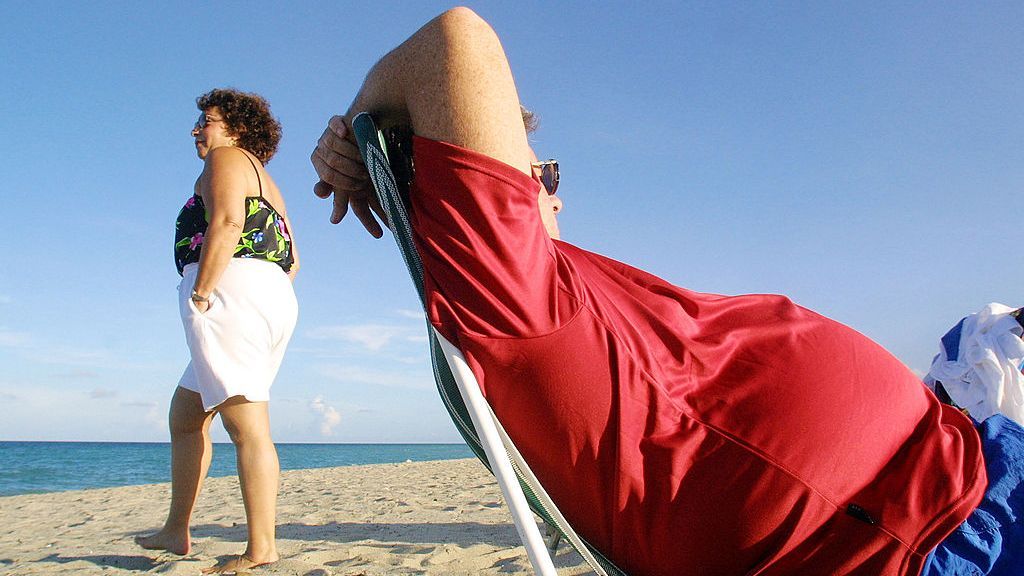 People enjoy themselves on a beach in Hollywood, Florida. Chronic obesity is associated with a higher risk of colorectal cancer, studies show. (Joe Raedle/Getty Images)

The longer a person stays fat, the more likely they are to develop bowel cancer, according to new research.

Scientists likened it to the “cumulative effects of smoking” leading to lung cancer.

The finding is based on a study of more than 10,000 people who were tracked for almost two decades.

Those with bulging waistlines throughout the study period were two-and-a-half times more prone to the disease than peers who maintained a normal body mass index (BMI).

Cases among participants who carried extra pounds for a few years increased by 25 percent compared with the control group.

Rates rose directly in tandem with the amount of time spent out of shape.

The study in the journal JAMA Oncology shows unhealthy lifestyles are a bigger factor than previously feared.

“The results of this case-control study suggest a greater role of cumulative lifetime excess weight [in] colorectal cancer risk than estimated by traditional analyses based on BMI measures taken at a single point in time,” said corresponding author Hermann Brenner.

Bowel cancer is the fourth most common cancer in the United Kingdom. It claims 16,500 lives annually. Around 43,000 cases are diagnosed each year.

It is believed that fat triggers tumors by secreting chemicals that cause inflammation.

The United Kingdom has been dubbed the “fat man of Europe,” with almost two-thirds of adults being overweight or obese.

Brenner and his colleagues compared 5,635 bowel-cancer patients diagnosed in Germany since 2003 with 4,515 healthy controls.

They calculated the number of years each individual had lived with a BMI of 25 or above. A healthy BMI is 18.5 to 24.9.

In recent years, obesity has been linked with a seven to 60 percent increased risk of bowel cancer.

“The findings in our study were consistent with these previous studies when BMI was considered only at a single point of time,” said Brenner.

“However, few studies have evaluated the associations looking at BMI at various points of time during the life span.

“We considered BMI at various ages and found excess weight [in people] between 20 and 70 years to be associated with colorectal cancer risk in a clear dose-response manner.

“The observed associations suggest [being overweight or obese from] a young adult age is a persistent risk factor throughout the adult lifespan.

“Consideration of cumulative exposure to excess weight throughout the life span is essential to disclose its full effects.

“Calculation of cumulative lifetime exposure has become a standard measure for other risk factors.

“For example, pack-years are widely used as a measure of lifetime cumulative smoking exposure and have been shown to be associated with the risk of a variety of smoking-related diseases, including multiple cancers.

“By contrast, such measures have not been widely used for other risk factors, such as excess weight,” said Brenner.

In 2016, more than 1.9 billion adults aged 18 years and older were overweight. Of these, about 13 percent, over 650 million adults, were obese, according to the World Health Organization.

Excess weight is linked with more than a dozen different types of cancer as well as cardiovascular disease, diabetes and even dementia.

“Measures to halt and reverse [the] prevalence of [being overweight or obese] may have potential to prevent a large share of colorectal cancer and possibly other obesity-related cancers,” said Brenner.

BMI is calculated by dividing weight in pounds (lbs) by height in inches squared and multiplying by a conversion factor of 703.