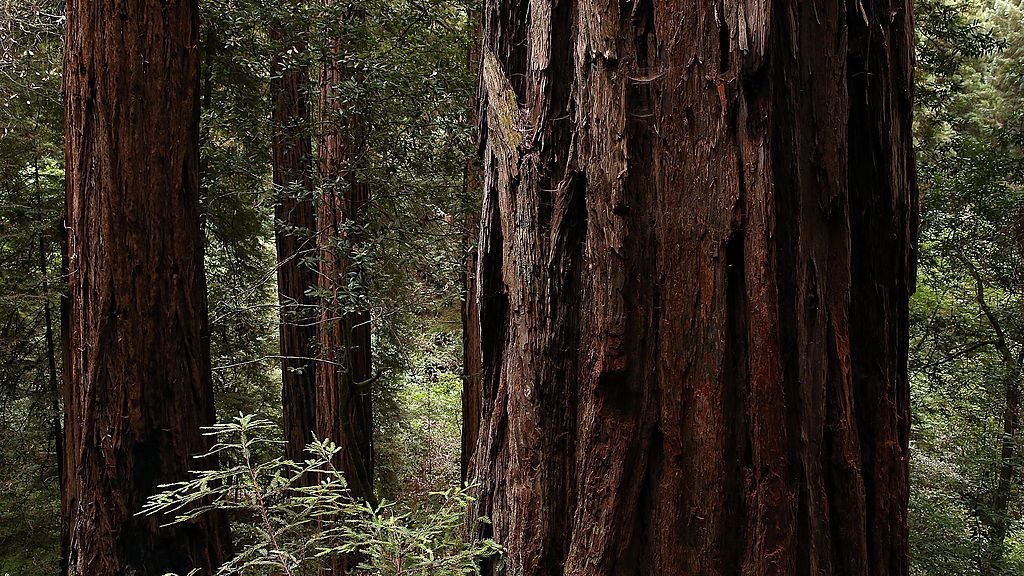 Coastal Redwood trees stand at Muir Woods National Monument on August 20, 2013, in Mill Valley, California. A recent study found that redwoods have two distinct types of leaves — one for absorbing water and one for photosynthesis. The placement of the leaf types changes across their range depending on how wet or dry their conditions are. (Justin Sullivan/Getty Images)

The tallest trees in the world continue to offer insights to scientists, with a new study revealing that redwoods have functionally distinct leaves that allow them to thrive in both wet and dry areas.

Renowned for facing many natural threats, redwoods are among the world’s oldest, tallest and widest trees. They have fire-resistant bark, tannin-rich heartwood and leaves that resist pests.

Not only do redwoods have specialized leaves, they can also shift their leaves around to better adapt to their conditions. On California’s rainy north-coast region, the axial leaf type is found on the lower branches, while the feathery photosynthesizing type is found in the upper levels to maximize sun exposure. But when redwoods are in the drier southern range, the water-absorbing type is found up high, where it can make the most of rain and fog.

“The cool thing here is their ability to thrive under all these circumstances and adjust themselves to these different environments,” said lead author Alana Chin of the University of California-Davis, who grew up in Mendocino County where the trees abound. “That things like this can be happening right under our nose in one of the best-studied species out there — none of us assumed this would be the story.”

Chin and the research team also found that large redwood trees can consume up to 14 gallons of water in just a few hours of getting wet. Because each of the towering giants can have more than 100 million leaves, researchers say it’s unlikely that other trees can absorb as much water, but that has yet to be confirmed — this study is the first to estimate water absorption by a tree crown.

The different leaf types allow redwoods to photosynthesize when wet, while the vital process may be inhibited in other trees when water covers the stomata, the tiny mouth-like pores that admit oxygen and carbon dioxide. The waxy coating on redwood peripheral leaves slows water absorption but aids photosynthesis during the rainy season.

Noting that she would not be surprised if other conifers have similar capabilities, Chin said, “Having leaves that aren’t for photosynthesis is in itself surprising. If you’re a tree, you don’t want to have a leaf that’s not photosynthesizing unless there’s a very good reason for it.”

The researchers compared the two types of leaves to understand their functionality and calculated the photosynthesis level of each. In addition, they developed a physics-based causal model that allowed them to determine which leaf traits regulate absorption rates.

What excites Chin the most is to have devised an effective and easy method to calculate redwood trees’ ability to absorb moisture-rich fog. Scientists can now monitor whether redwoods are adapting to a possibly drier world in the future. By photographing the waxy surfaces of both types of leaves, scientists can share their data among themselves and with the public.