At this distance, light that was emitted by the star 2,000 years ago is just now reaching Earth
By Zachary Rosenthal March 18, 2022
Facebook
Twitter
Linkedin
Email 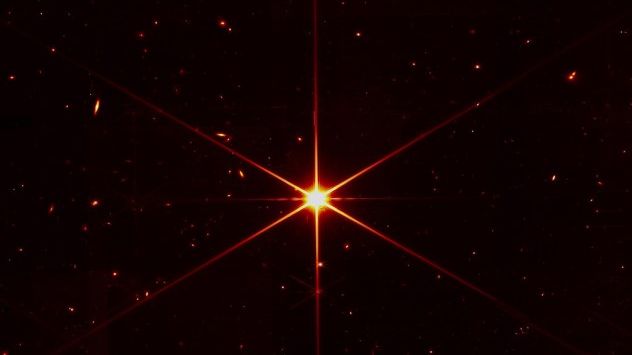 While the purpose of this image was to focus on the bright star at the center for alignment evaluation, Webb's optics and the Near Infrared Camera are so sensitive that the galaxies and stars seen in the background show up. This image of the star, which is called 2MASS J17554042+6551277, uses a red filter to optimize visual contrast. (NASA/STScI)

The first sharp image from NASA’s James Webb Space Telescope captured a stunningly clear photo of a twinkling star roughly more than 2,000 light-years away from Earth.

The photo, released on Wednesday, shows the distant Milky Way star located in deep space about 2,000 light-years away in the Ursa Major constellation. Experts have designated the star as 2MASS J17554042+6551277. At this distance, light that was emitted by the star 2,000 years ago is just now reaching Earth, giving earthlings a close-up glimpse of what the star looked like around the time Julius Ceasar reigned and Jesus Christ walked the Earth.

This photo was part of a test of the telescope, which uses a complex system of 18 hexagonal mirrors that have been adjusted on the level of nanometers, or a billionth of a meter. The adjustments work to allow the mirrors to form a single surface, which then allows for the creation of a single image in extraordinarily sharp focus, NASA scientists said in a press release, adding that the test exceeded their expectations.

“More than 20 years ago, the Webb team set out to build the most powerful telescope that anyone has ever put in space and came up with an audacious optical design to meet demanding science goals,” said Thomas Zurbuchen, associate administrator for NASA’s Science Mission Directorate in Washington. “Today, we can say that design is going to deliver.”

Other scientists pointed out that the photograph is so detailed, intricate details in the background can be recognized.

“You not only see the star and the spikes from the diffraction of the star, but you see other stars in the field that are tightly focused, just like we expect, and all sorts of other interesting structure in the background,” Lee Feinberg, the NASA engineer who led the development of Webb’s optical elements, told reporters, according to the BBC.

“We’ve actually done very detailed analysis of the images we’re getting, and, so far, what we’re finding is that the performance is as good if not better than our most optimistic prediction,” Feinberg said.

“Now, we took this image to characterize the sharpness, but you can’t help but see those thousands of galaxies behind it; they’re truly gorgeous,” Rigby said. “There’s no way that Webb can look for 2,000 seconds at any point in the sky and not so incredibly deeply. So this is going to be the future from now on. We’re seeing back in time … light as it looks billions of years ago without even really breaking a sweat.”

Future images taken by the telescope are expected to be even sharper. The telescope, which was launched on Dec. 25, 2021, and arrived at its planned destination about 930,000 miles away from Earth in late January, is set to be a vast improvement over the Hubble Space Telescope, which the Webb telescope was launched to replace. Hubble was launched in 1990 and has more than doubled its life expectancy of 15 years, according to the Massachusetts Institute of Technology’s Technology Review.

“Webb will explore every phase of cosmic history — from within our solar system to the most distant observable galaxies in the early universe and everything in between,” NASA said in a news release this week. “Webb will reveal new and unexpected discoveries and help humanity understand the origins of the universe and our place in it.”

The Webb telescope is more powerful than the Hubble Space Telescope and is able to image objects that were up to 100 times too faint for the Hubble telescope to capture. The Webb telescope will be able to last for 10 to 20 years until it runs out of fuel to power its thrusters, according to a report from LiveScience.

Produced in association with AccueWeather.com.