A pair of orphaned young manatees were rescued after their mothers died of starvation.
By AccuWeather March 18, 2022
Facebook
Twitter
Linkedin
Email 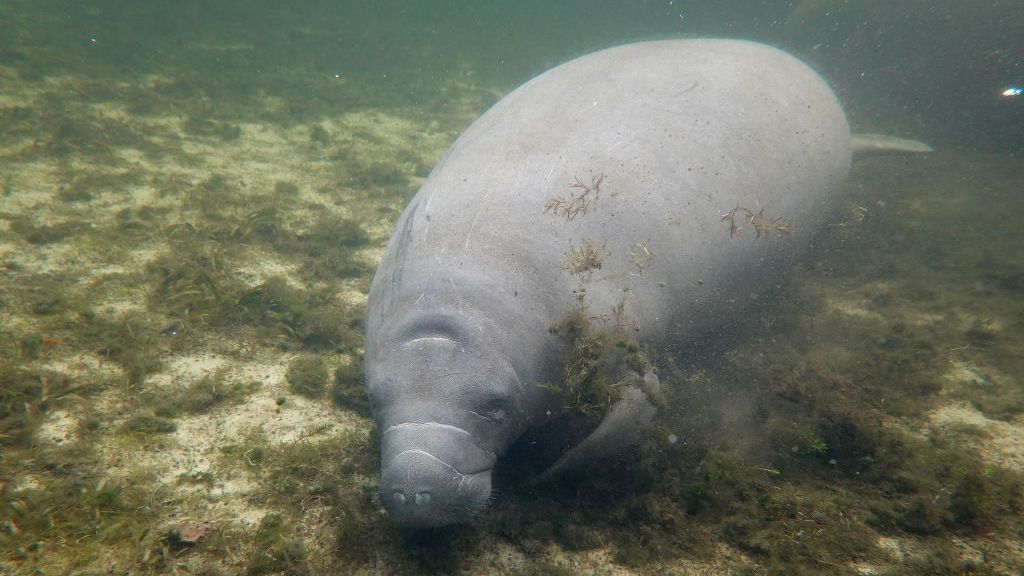 A manatee swims in the Homosassa River on Oct. 05, 2021, in Homosassa, Florida. Conservationists, including those from the Homosassa River Restoration Project, plant seagrass in the area to help restore the natural habitat for manatees and provide a feeding ground for the mammals, following a record year in manatee deaths in Florida. The deaths were primarily from starvation due to the loss of seagrass beds. (Joe Raedle/Getty Images)

They don’t yet have names, but two very young and under-nourished manatees orphaned out in the wild, male and female, recently made the journey from SeaWorld to their new home at an aquarium in Atlanta for some sorely needed rehabilitation.

Barely 1 year old, the manatees arrived on March 9 at the Georgia Aquarium as part of a joint effort of the Manatee Rescue and Rehabilitation Partnership to provide expert care and facilities for the creatures, which are dying in record numbers due to starvation.

Officials said the manatees were rescued after their mothers died of starvation, leaving them to fend for themselves. The male manatee was rescued near a power plant off the coast of Florida in Port St. John and the female inland in Blue Springs north of Orlando, where she was “suffering from cold stress,” according to SeaWorld Orlando.

“They came in at 175 to 180 pounds, thereabouts, and our task now is to grow them out,” Coco said in an interview with AccuWeather National Reporter Kim Leoffler. “But they need to be much stronger and have the ability to withstand events where they may not be able to find food for a period of time or cold weather, that sort of thing.”

A record number of manatees–about 1,100–died of starvation across Florida in 2021, which is double the number from the year before, according to the Florida Fish and Wildlife Conservation Commission.

The cause? A lack of seagrass, the manatees’ main food source. The seagrass has been heavily depleted due to harmful algae blooms in the Indian River Lagoon in eastern Florida, where manatees have for years subsisted. Like any living plant, the seagrass depends on sunlight to survive and thrive in such an ecosystem. But the large amount of algae blocks that badly needed light.

“This is happening over multiple years and it’s like a desert over there in the Indian River Lagoon,” said Dr. James Powell, president of the Clearwater Marine Aquarium in Florida, another facility that has taken in malnourished manatees to alleviate some of the pressure from other facilities already caring for them.

The manatees’ stay at the Georgia Aquarium will be temporary. Once they’re healthy enough, they will return for another brief stay at SeaWorld.

Coco said the calves need to put on more weight and reach about 400 to 600 pounds before they can go back into the wild.

Meanwhile, experts said the efforts to save the manatees, unfortunately, can’t stop as long as there are recurring algae and seagrass problems.

“We’ve had large issues before like red tide where we’ve had a lot of animals impacted…but this is different, this is long term, so it takes some time to recover,” he told AccuWeather earlier this year. “There’s been persistent algae bloom in the last eight to 10 years.”

“We need to keep moving forward to expand water quality testing in the Indian River Lagoon, so we can understand what’s going on with this seagrass loss,” Marine Resource Council Executive Director Leesa Souto told WUSF in Florida this week.

Just as Clearwater Aquarium has expanded its rehabilitation area for manatees its caring for, the Georgia Aquarium said it will likely see more manatees over time coming in for help as the facility begins to “add more and more capacity to this program.”

“The situation is very serious and we really need to invest time and resources and expertise to turn the tide on this situation and help as many animals as possible,” Coco said.

«Previous Post
VIDEO: A Rottweiler’s Guilty Reaction To A Ripped Up Toy Scores Big On TikTok»Next Post
4 Circus Tigers Sent To Animal Sanctuary After Spending 15 Years In A Cage