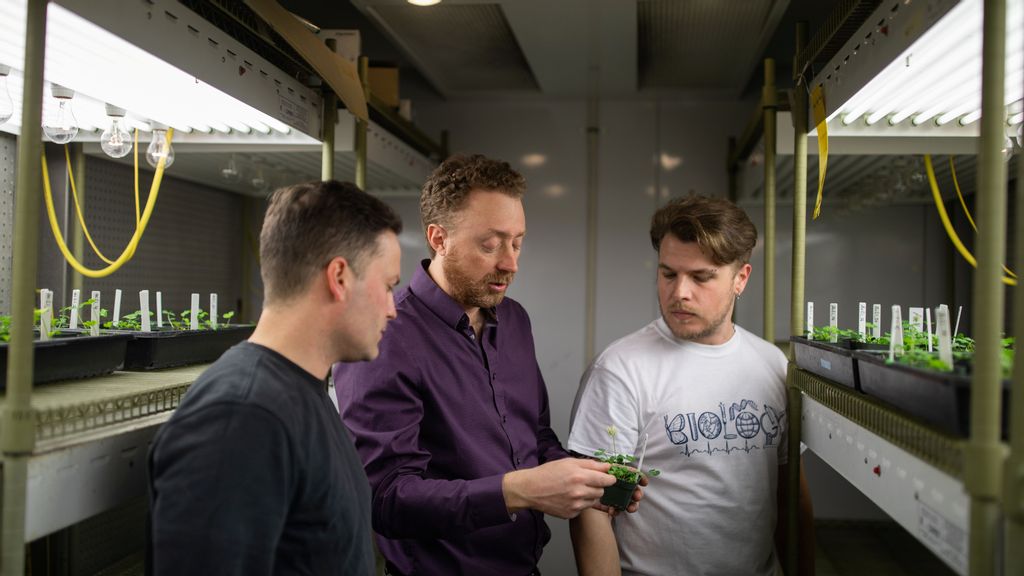 Rob Ness, Marc Johnson and their PhD student James Santangelo led a study, supported by GLUE, to examine the effects that humans have had on the evolution of plants and animals. Almost 300 scientists from around the world coordinated on the project. (Zenger News)

Humans are changing the way life evolves, according to new research that found plants and animals are adapting in unusual ways because of us.

The phenomenon, dubbed “unnatural selection,” is one of the greatest biological forces on Earth.

It has created “parallel urban worlds” where wildlife has had to respond — or die.

“We’ve long known that we’ve changed cities in pretty profound ways, and we’ve dramatically altered the environment and ecosystems,” said James Santangelo, a PhD student at the University of Toronto and lead author of the study, which was published in the journal Science.

“But we [have] just showed this happens, often in similar ways, on a global scale,” said Santangelo.

The finding is based on an analysis of white clover collected from 160 cities and nearby rural areas in 26 countries.

A familiar “weed” of British gardens, the clover is famous for its three “trefoil” leaves.

It provides the clearest evidence to date that people in towns and cities are driving nature.

The shamrock plant is genetically altering itself from London to Lisbon, Toronto to Tokyo and Melbourne to Munich.

Humans are profoundly transforming their surroundings, which is dramatically impacting organisms they share them with.

The study, supported by the Global Urban Evolution Project (GLUE), showed environmental conditions in cities tend to be more similar to each other than to nearby rural habitats.

As a result, downtown Toronto is more comparable to downtown Tokyo than to farmland and forests just outside the city.

The international team found city varieties produce less of the chemical due to changes in the presence of plant eaters and water stress.

This applies across different climates, and the implications reach far beyond the humble clover.

“This study is a model to understand how humans change the evolution of life around us,” said Rob Ness, also from Toronto, who co-led the study along with Marc Johnson and their PhD candidate Santangelo.

“Cities are where people live, and this is the most compelling evidence we have that we are altering the evolution of life in them.

“Beyond ecologists and evolutionary biologists, this is going to be important for society,” he said.

White clover is present in almost every city, providing the perfect tool to investigate human influence on evolution.

Evolution, at least for larger, more complex organisms, can be slow. It leaves many animals unable to adapt fast enough.

But rapid change is also possible. Researchers identified a so-called “hopeful monster” in Colorado — a mutant variation of the Colorado blue columbine that’s rapidly proliferating as an adaptation to being eaten by aphids and deer.

The most famous example of this as a result of “unnatural selection” is the peppered moth, which changed from speckled white to black in response to soot rising from the chimneys in Britain during the Industrial Revolution.

Today, human activity has affected the evolution of numerous species, from Zambian elephants born without tusks in response to poaching to mosquito species that can only exist in their city’s subway system.

The study opens the door to developing strategies to conserve rare species in towns and cities, the researchers said.

It can also help them better understand how to prevent the spread of unwanted pests and diseases.

The 287 scientists who participated in the study sequenced more than 2,500 clover genomes from over 110,000 samples, creating a massive dataset that will be studied for years to come.

“Nearly everyone we asked to collaborate said yes, and that was kind of remarkable because we were asking people to take on a lot of work,” said Johnson.

“Our collaborators recognized the importance of this project. There has never been a field study of evolution of this scale or a global study of how urbanization influences evolution.

“It would have been impossible to do this without our global set of collaborators,” he said.