The storm is likely to become one of the biggest snow producers of the season for the Denver area.
By Alex Sosnowski March 18, 2022
Facebook
Twitter
Linkedin
Email 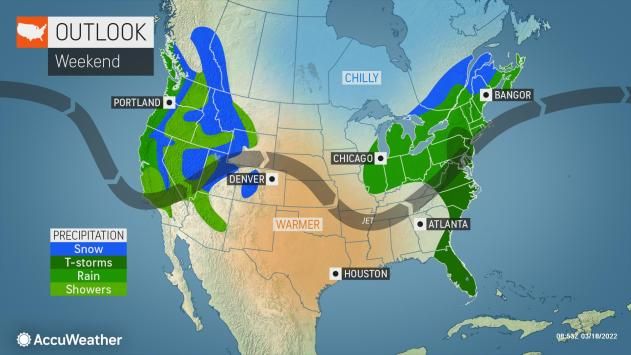 The storm will first spread rain and mountain snow from the Northwest region before reaching the Great Basin and Intermountain West later this weekend, forecasters say. (AccuWeather)

The same storm poised to bring an outbreak of severe weather and tornadoes over the southern United States next week will also produce a major snowstorm over portions of the central and southern Rockies and High Plains from Sunday night to Tuesday, AccuWeather meteorologists say.

The storm is likely to become one of the biggest snow producers of the season for the Denver area, and it has the potential to unload over a foot of snow to fall in some locations. Forecasters tracking the developing storm system say there is the potential for the storm to eventually evolve into an all-out blizzard in four different states.

The snowstorm that occurred this past Wednesday and Thursday was the biggest of the season so far for Denver in terms of snowfall as a total of 7.3 inches of snow fell on the city with 12-18 inches reported in the mountains. However, the upcoming storm could bring more than those amounts.

The abrupt transition back to winter in the early days of spring will occur following high temperatures in the 60s F into Sunday in Denver. By Monday, highs will only reach the 30s, and the combination of strengthening winds and temperatures plummeting into the 30s, 20s and even the teens in some locations will result in AccuWeather RealFeel® Temperatures that can dip to near zero at times during the storm.

Forecasters say travelers should be prepared for delays on the roads and at airports. Should the storm develop to its full potential, the heavy rate of snow, poor visibility and high winds could force some roads to close and cause some flights to be canceled. Highways most likely to have adverse effects from the storm include interstates 25, 70, 76 and 80, as well as U.S. Routes 34, 36, 50 and 385.

The storm will first spread rain and mountain snow from the Northwest region before reaching the Great Basin and Intermountain West later this weekend, forecasters say. The next stop for the snow is likely to be over Utah’s Wasatch Range on Sunday and the western slopes of the Colorado Rockies by Sunday evening. Around Salt Lake City, rain showers could transition to snow showers in the afternoon or evening.

Snow will likely ramp up over the central and southern Rockies Sunday night and should get underway on the eastern slopes and plains of Colorado, as well as southeastern Wyoming and northern New Mexico on Monday. The storm may begin as a bit of rain in some locations away from the mountains, but a transition to snow will then follow.

“At this time, an accumulation of 6-10 inches of snow is most likely to fall on Denver with more snow to the south over the Palmer Divide and farther west over the Foothills and Front Range,” AccuWeather Senior Meteorologist Dan Pydynowski said. In those higher elevation locations, a general 12-24 inches of snow is anticipated along with an AccuWeather Local StormMax™ of 30 inches.

The exact track of the storm will determine how far north the heaviest snow falls. As of Friday afternoon, forecasts pegged the heaviest snow to fall in the middle of Colorado and to areas just south of the Denver metro area, according to AccuWeather Meteorologist Alex DaSilva said.

“Any southward shift of the storm could result in the heaviest snow centering more toward southern Colorado and northern New Mexico,” DaSilva explained. “Conversely, more of a northward drift in the center of the storm could push the heaviest snow into northern Colorado and southern Wyoming and perhaps Denver itself,” he added.

Even if the storm takes a track that causes the heaviest snow to shift, the storm is likely to intensify enough to cause winds to increase and the visibility to drop, which would likely result in whiteout conditions. If the visibility drops to or lower than one-quarter of a mile and winds frequently gust to 35 mph or greater for three consecutive hours, blizzard conditions would be achieved.

A blizzard could unfold from southeastern Wyoming and the Nebraska Panhandle through central and eastern Colorado to northeastern New Mexico with this storm. However, blowing and drifting snow is likely even where true blizzard conditions do not develop.

In these locations over the North Central region, snowfall is likely to range from 1-6 inches in general, and accumulations may vary depending on the time of day. Most of the snow in these locations is likely to pile up on non-paved surfaces, with most of the accumulation likely to occur late at night and early in the morning. The March sun may cause snow to melt as it falls during the midday and afternoon hours. The combination of gusty winds and blowing snow could bring periods of low visibility and poor travel, forecasters warn.

It’s not uncommon for Colorado and surrounding states to get thumped by heavy snow during the early spring. Some of the top snowstorms on record for Denver have occurred in the spring rather than in the heart of the winter in January and February. Just last year, a storm from March 13-14 unloaded 27.1 inches of snow which is good for the second largest on record in March for the Mile High City and the fourth-largest snowfall from a single storm on record there. The 2003 blizzard that spanned March 17-19 dropped 31.8 inches is the champion for the month and second only on the all-time list to the Dec. 1-5, 1913, behemoth that yielded 45.7 inches of snow.

Despite getting off to a slow start this year in terms of snowfall, Denver has caught and passed the seasonal average as of Thursday with 49.2 inches, compared to a normal snowfall of 39.7 inches. The upcoming storm may push the seasonal total close to 60 inches.

In the wake of the storm, winds will gradually subside at midweek. Temperatures on Wednesday are projected to rebound into the 30s and 40s, and that should cause a considerable amount of snow to melt thanks in part to the March sun angle.