Despite Spring’s Arrival, Two-thirds Of US Could Still Face Snow

There will be a few more storms through early April before winter is gone for good.
By Brian Lada March 18, 2022
Facebook
Twitter
Linkedin
Email 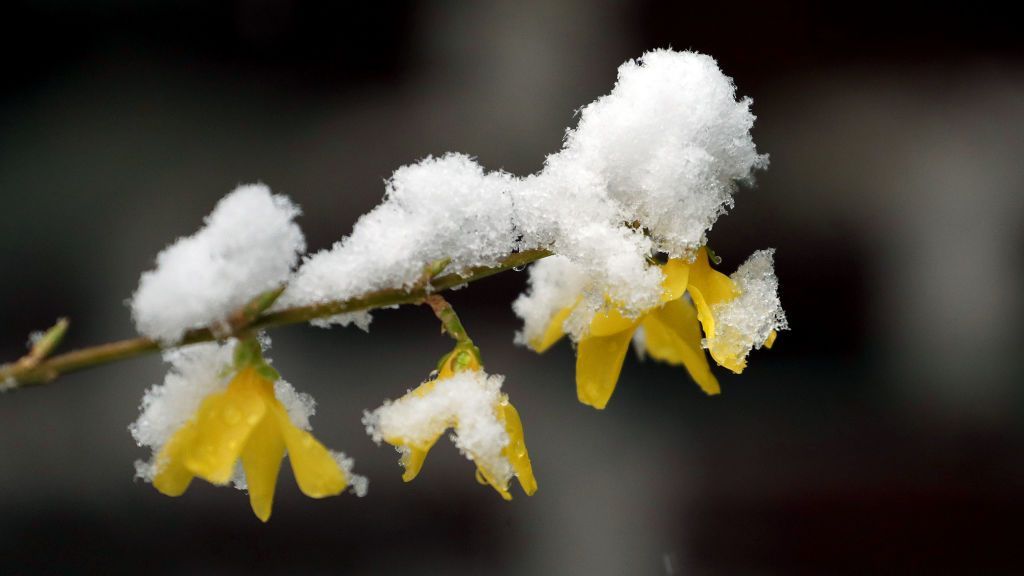 Around two-thirds of the country may want to keep a show shovel or ice scraper handy over the next few weeks as the arrival of spring will not shut the door on Old Man Winter. File photo (Michael Heiman/Getty Images)

Winter has been a rollercoaster across the United States from coast to coast, and for part of the country, the ride has come to an end — but there are still a few bumps before winter weather is gone for good.

With spring officially arriving on Sunday, March 20, at 11:33 a.m. EDT, AccuWeather is ready to announce the end of winter weather, at least for part of the contiguous U.S.

Around two-thirds of the country may want to keep a show shovel or ice scraper handy over the next few weeks as the arrival of spring will not shut the door on Old Man Winter.

“A few more storms will track from the Northwest to the southern Rockies then cutting across the Plains and the Ohio Valley through early April,” AccuWeather Senior Meteorologist and Long-Range Forecaster Paul Pastelok said.

This active storm track paired with additional waves of cold air from the north will mean the possibility for snow after the official start of spring in Chicago, Detroit, Pittsburgh, Boston and even New York City.

People who live farther south might finally be safe to pack away their snow gear until next winter.

“We do feel that anywhere from Philadelphia southward to D.C. and into the Carolinas and the Gulf Coast is pretty much safe,” Pastelok added, and likely won’t see “snowfall for the rest of the season.”

Pastelok and his team of long-range forecasters expect a very active storm track to continue farther to the west across Washington, Oregon and into the central part of the Rockies into April.

“There is still a small chance for snow in the cities along the I-5 corridor, which is late for this time of year,” Pastelok added.

Some of these storms could dip to the south to deliver light rain and late-season snow to California, but a significant drought-busting weather pattern is unlikely to unfold.

At this point in the winter, the western U.S. needs all the precipitation it can get to help fill water reservoirs and build up the mountain snowpack before the dry winter months.

Lake Powell, a water reservoir held back by the Glen Canyon Dam in Arizona, reached the lowest level this week since it was constructed in the early 1960s. At such a low level, there is the risk that the reservoir may dry up to the point that hydroelectric power cannot be generated.

Even with the short-term benefits of early-spring precipitation and summer snowmelt feeding the reservoir, it will be a drop in the bucket compared to the long-term drought issues across the interior West.

But the whole season wasn’t dry across the West. Early-season storms doused California in December and unloaded yards of much-needed snow across the Sierra Nevada before a nearly bone-dry January and February. There was even a period of record-challenging heat in early February during the Super Bowl, making it feel more like summer than winter in Southern California.

Meanwhile, the onset of the snowy season was late to arrive in Denver and Chicago with both cities setting new records for the latest first measurable snow in history.

The winter as a whole was not as snowy as it typically is for many towns and cities across the Northeast and Midwest, but there were some exceptions.

Among official National Weather Service stations that keep snow records, Atlantic City, New Jersey, had the biggest amount of snowfall compared to normal, with 33.3 inches piling up, nearly all of which fell in January. This was nearly double the city’s average annual snowfall of 17.4 inches.

Nashville, Tennessee, experienced its snowiest winter in nearly a decade, with 12.3 inches accumulating in Music City, a total just shy of the 12.5 inches that accumulated in the winter of 2010-2011.

The biggest surprises were not the towns that reported more snow than normal but those that ended the winter with a significant snow deficit.

Fulton, New York, was the biggest upset of the season, measuring just half of the annual 140 inches that typically falls in the upstate New York town. Erie, Pennsylvania, also experienced a lack of snow, with only 60.5 inches falling through March 17, well below the seasonal average of 104.3 inches.