More than 23 million are facing some type of severe weather threat on Friday from the Gulf Coast to the Ohio Valley.
By Ryan Adamson March 18, 2022
Facebook
Twitter
Linkedin
Email 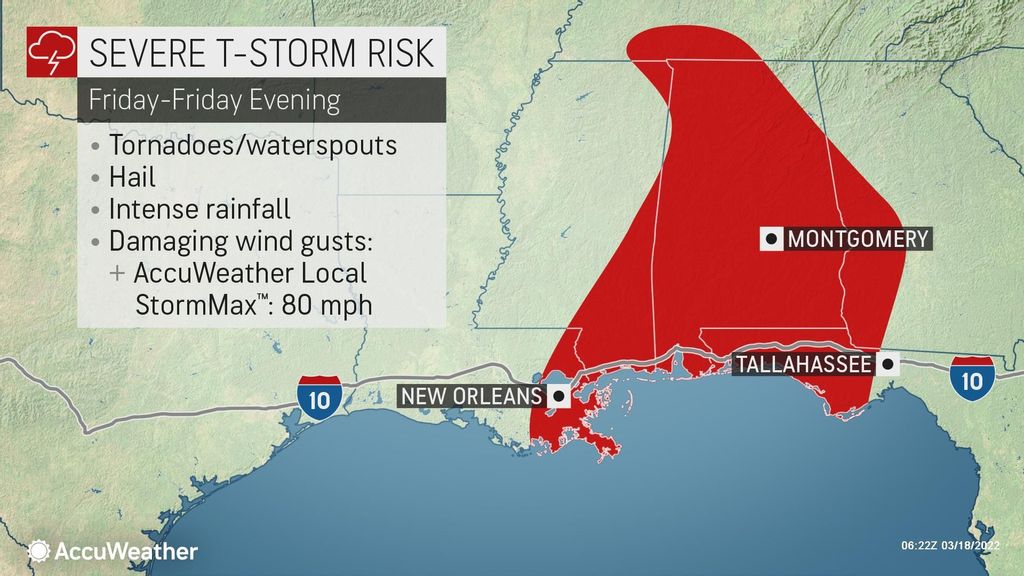 More storms will jolt areas from the Ohio Valley to the Gulf Coast and mid-Atlantic into the weekend. (AccuWeather)

Severe weather will threaten multiple hazards, including tornadoes, across parts of the South on Friday as the atmosphere remains volatile, AccuWeather forecasters say.

Damaging thunderstorms have made their presence felt across parts of the south-central and the southeastern United States for much of last week, and more storms will jolt areas from the Ohio Valley to the Gulf Coast and mid-Atlantic into the weekend.

Thunderstorms on Thursday mainly produced hail and a few instances of damaging wind across Oklahoma, while a slow-moving storm system produced deadly flooding around the Birmingham, Alabama, area on Wednesday. On March 12, a waterspout roared ashore in Fort Myers Beach, Florida, and sent beachgoers scurrying.

“Severe weather is anticipated across the Midwest and Southeast through Friday evening, with all types on the table from tornadoes and hail to flooding downpours and damaging wind gusts,” said AccuWeather Meteorologist Jessica Storm.

There will be two separate areas under the threat of severe weather on Friday. While both will have flooding downpours and damaging wind gusts as risks, the hail and tornado threat will vary somewhat.

“The northern portion of the severe weather risk is drawing attention for potentially large hail in cities such as Paducah, Bowling Green and Louisville, Kentucky; Evansville, Indiana; and Nashville, Tennessee,” said Storm.

“Hail can form when there is a lot of up-and-down movement with a thunderstorm, causing rain droplets to collide and freeze together,” explained Storm.

The severe area farther to the south will have a higher risk for tornadoes, some of which may begin as waterspouts over the Gulf of Mexico before moving onshore.

“Anywhere from New Orleans to Tupelo, Mississippi, and Panama City, Florida, will have a risk of tornadoes,” said Storm.

The National Weather Service’s Storm Prediction Center says there is an “enhanced” risk for severe thunderstorms on Friday in an area that includes parts of Mississippi, Alabama, far-northwestern Florida and even some parts of western Georgia. This enhanced risk area covers cities such as Montgomery, Auburn and Mobile, Alabama.

The SPC says that more than 23 million are facing some type of severe weather threat on Friday from the Gulf Coast to the Ohio Valley, and more than 2 million live in the area highlighted by the enhanced risk.

Those two regions will have a quieter day on Saturday as thunderstorms shift to the East Coast. However, the risk of severe weather there may be slightly lower.

“On Saturday, severe weather is expected to be more isolated and concentrated along the East Coast from southern Georgia to Pennsylvania and New Jersey,” said Storm.

Storm went on to say that some potent storms cannot be ruled out farther to the northwest in areas from central Pennsylvania to New York.

“The main impacts in Pennsylvania and New York are expected to be brief downpours and gusty winds, though hail is also a possibility,” she said.

A cold front helping to trigger the severe weather will be off the East Coast by Sunday. However, AccuWeather forecasters are tracking an even bigger threat for severe weather that could unfold from the southern Plains to the Tennessee Valley and Southeast early next week.

«Previous Post
Redwoods Have Specialized Leaves That Allow Adaptation To Both Wet And Drier Climates»Next Post
Despite Spring’s Arrival, Two-thirds Of US Could Still Face Snow