Tank had “Z” symbol, which has been viewed as a sign of support for the invasion within Russia.
By Lee Bullen March 17, 2022
Facebook
Twitter
Linkedin
Email 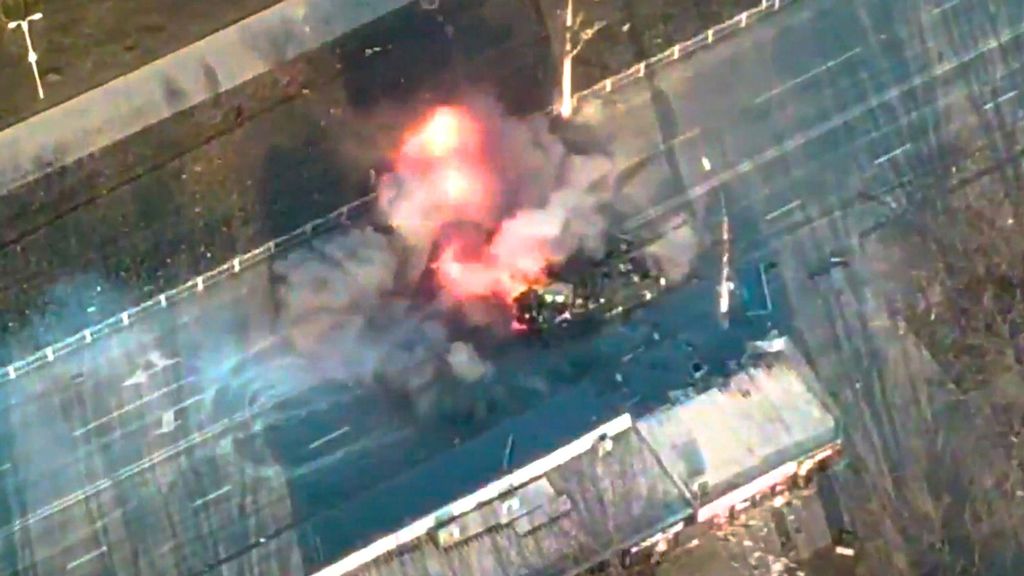 A Russian tank is blown up by Ukrainian troops in Mariupol, Ukraine, as seen in this screenshot from a video. (@Polk_Azov/Zenger)

Ukrainian missiles repeatedly pummeled a Russian tank with a “Z” symbol before blowing it to bits with at least one soldier captured on video fleeing for his life.

“Another destroyed Russian tank by our virtuosos from the Azov Regiment, the National Guard of Ukraine,” the General Staff of the Armed Forces of Ukraine wrote when sharing the footage on social media on March 16.

The same clip was posted by the National Guard of Ukraine, which said the tank was destroyed by the “defenders” of the city of Mariupol in southeastern Ukraine.

“Soldiers of a special detachment of the National Guard of Ukraine continue to defend Mariupol from attempts by Russian troops to break through and capture the city,” the National Guard statement said, referring to the Azov Regiment, also known as the Azov Battalion.

The regiment is viewed as a far-right infantry unit whose members have been accused of being neo-Nazis. The regiment was formed as a volunteer militia in May 2014 and fought against pro-Russian separatists in Donetsk, in the eastern region of Ukraine. Before launching the invasion on Feb. 24, Russian President Vladimir Putin recognized the independence of Donetsk and Luhansk, another territory in eastern Ukraine.

The footage shows the tank with the “Z” stopping and then reversing following a strike, and a solider is seen opening a hatch, from which smoke is blowing.

Following another strike, a soldier is seen clambering out of the vehicle and running away as another strike apparently targets him.

The footage ends with the soldier shuffling away on the grassy roadside facedown as the tank smolders.

“It is a pity that hundreds of civilians are being killed by the occupying forces during the bombing. However, do not feel sorry for the occupiers, whom the Mariupol defenders will destroy to the last, just like this tank,” the National Guard’s statement said.

The Russian Armed Forces have been daubing their military vehicles with the “Z” symbol, which has gained traction within Russia as a symbol of support for the invasion.

The Russian military has not publicly explained the usage of the letter, but posts on its Instagram page indicate that “Z” means Za pobedu (“for victory”).