The country’s emergency services praised its first responders for caring about animals, even in wartime. 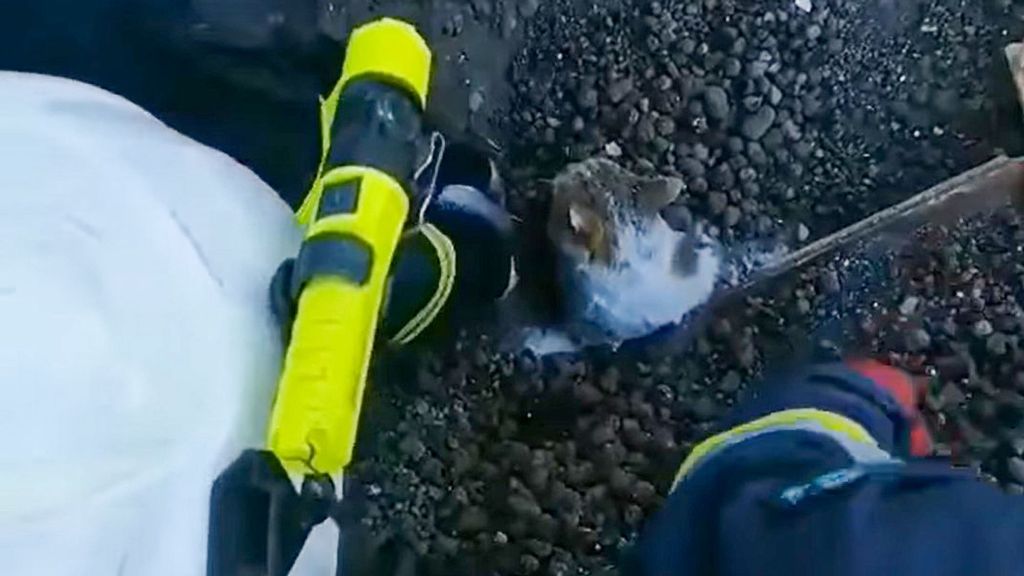 Ukrainian firefighters rescued a kitten from under the rubble of a collapsed building in Kharkiv on March 16. (State Emergency Service of Ukraine/Zenger)

Ukrainian first responders rescued a cat trapped in the rubble of a destroyed building.

The footage was shared on social media by the State Emergency Service (SES) of Ukraine on March 16.

The SES said the cat was found in the debris of a damaged building in Kharkiv.

The SES said: “What distinguishes us, Ukrainians — a bright and good nation — from the ‘Russian measure’ that cynically destroys our cities and kills our people?

“Yes, everything. Absolutely everything distinguishes us. They do not regret sending their soldiers as meat to a certain terrible death. And our guys even feel sorry for the cat that was hurt by the wreckage of a building, which still needs to be dug up. Under fire.”

The SES said: “Fearless warriors of light with a good soul, this cat lost its owners and one of nine lives during another vile rocket attack on Kharkiv.”

However, the story had a happy ending, after first responders found a loving owner for the homeless animal.

“Our guys did not leave it. The cat was taken away and given to a caring woman who promised to take care of him,” the SES said.

“This is one little story of a great Ukraine. Our story.”

The United Nations’ International Court of Justice (ICJ) in The Hague issued a ruling on March 16 ordering Russia to immediately suspend military operations in Ukraine. The ruling was a result of a suit filed by Ukraine on Feb. 27, “accusing Russia of manipulating the concept of genocide to justify its military aggression.”

The U.N. said: “Although the ICJ’s verdicts are binding, news reports questioned whether Moscow would abide by the ruling, and the court has no direct means of enforcing them.”

Russia did not to participate in the court’s oral proceedings. It presented a document that said the court lacks jurisdiction and requested that it “refrain from indicating provisional measures and to remove the case from its list.”

In a tweet posted shortly after the ruling, U.N. Secretary-General Antonio Guterres, said that the majority decision “fully reinforces my repeated appeals for peace.”

Russia’s war on Ukraine is now in its 22nd day.