VIDEO: Russian Tank Trundles Over Stream In Snowy Village Before Ukrainian Missile Blows It To Bits 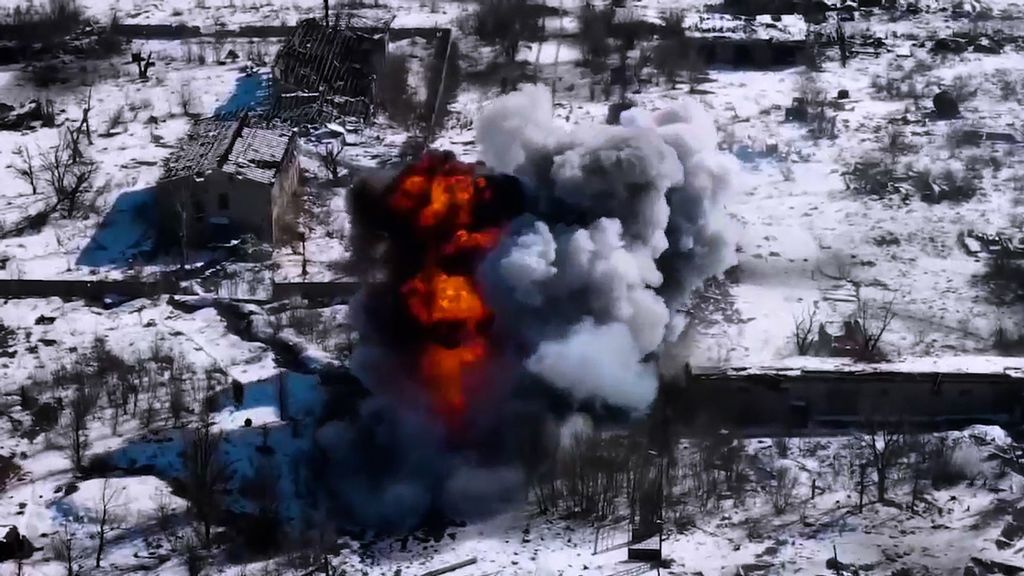 A Russian tank was hit by Ukrainian missiles just as it crossed an icy stream. (@GeneralStaff.ua/Zenger)

Ukrainian troops celebrated a victory against Russian forces when a Russian tank trundling over an icy stream in a battle-scarred, snow-covered village was blown up by a Ukrainian missile.

“Ukrainian paratroopers are versatile soldiers. The Russian occupiers’ tank flew over Ukrainian land in a very picturesque way. We are a masterful people, we will collect it, melt it and make something useful with it,” the General Staff of the Armed Forces of Ukraine said on social media on March 15.

The Ukrainian Armed Forces did not state where the tank attack took place.

In the drone footage, a bomb is seen exploding in the background as the camera pans across a war-torn village and focuses on a tank crossing an icy stream.

Just as the tank makes it to the other side of the stream, a missile hits it, blasting the armored vehicle to bits in a large fireball.

The tank is seen burning brightly as parts fly in all directions, and black smoke fills the air.

Another victory was reported in Trostianets in northeastern Ukraine where a Russian howitzer base in the local railway station was blown up by the Ukrainian military. “Every day is a step closer to victory!” Ukraine’s 93rd Mechanized Brigade said when posting news of the encounter.

On Feb. 24, Russian President Vladimir Putin ordered the invasion of Ukraine in what the Kremlin is still calling a “special military operation” to “demilitarize and denazify” the sovereign European state.

The invasion has caused millions of people to flee the country in what has become Europe’s biggest refugee crisis since World War II.

Meanwhile, a 40-mile-long Russian military convoy is currently closing in on the Ukrainian capital of Kyiv. However, it has remained stalled to the north of the city for over a week.

Despite claims that they are not targeting civilians, Russian missiles hit the maternity ward of a hospital in Mariupol in eastern Ukraine last week, causing severe damage.

In another incident in the city, a hidden Russian tank was caught on video firing upon a lone elderly civilian walking along a street. The shell produced a fiery flare that stretched across the street as it slammed into the building behind the man, raising plumes of thick black smoke. It is unlikely he survived the encounter, officials say.

On March 16, the General Staff of the Armed Forces of Ukraine reported on social media that Ukrainian President Volodymyr Zelensky had decreed a nationwide minute of silence at 9 a.m. each day to honor the soldiers who have died defending their country against Russia as well as peaceful Ukrainian citizens who were killed during the ongoing war.

The Russian invasion of Ukraine is now entering its fourth week.