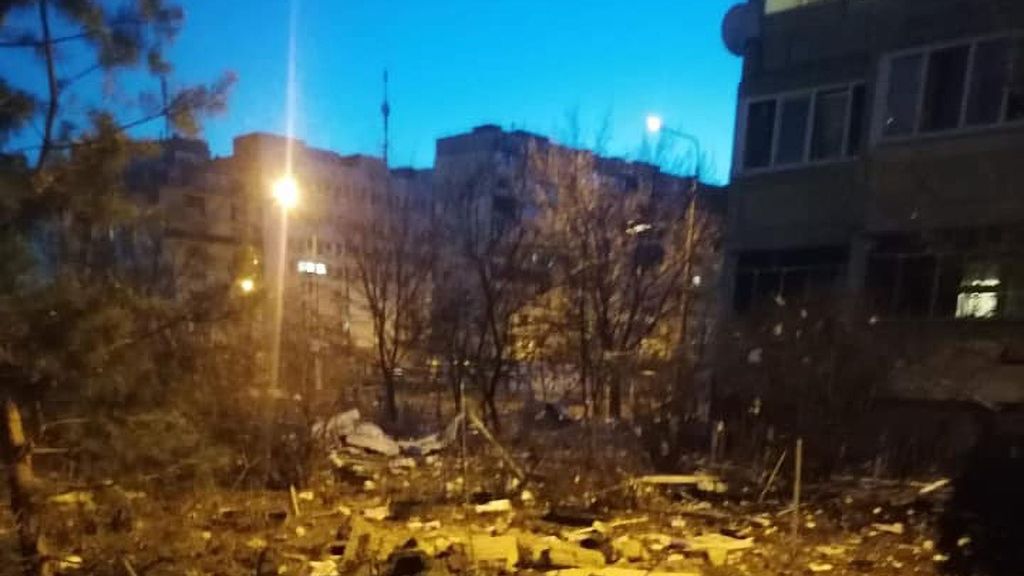 The remains of a downed rocket that damaged a high-rise building in Kyiv, killing one and injuring three people, are depicted. (State Emergency Service of Ukraine/Zenger)

Ukrainian firemen and other rescuer workers cut residents out of their flats and led them to safety in a Kyiv neighborhood on March 17 while putting out fires in a building devastated by a downed missile.

The State Emergency Service (SES) of Ukraine shared footage of the rescue effort on social media, saying that “ten units of basic and special fire and rescue equipment as well as 60 personnel” were involved.

“On 17th March, at 5.02am, the Rescue Service 101 received a report of a fire and destruction of a residential building in the Darnytskyi district of the capital,” the SES said in a statement accompanying the video.

“Firefighters from the nearest fire and rescue units immediately arrived on the scene. Upon arrival, rescuers found that as a result of the fall of the downed missile, the 16th and technical floor of the building was demolished, and the 16th floor of the apartment block was set on fire.

The SES statement went on to stay that the fire in an area of &ZeroWidthSpace;about 215 square feet (20 square meters) was extinguished at 5:49 a.m.

“People are being evacuated from the 11th and higher floors of the building and rescue operations are being carried out to dismantle the structures and search for people,” the statement said, adding that “preliminary information” indicated that one person was killed three injured and 30, including the injured, were evacuated on the spot.

The SES said the information was being clarified.

With the war in Ukraine now in its 22nd day, Russia has reportedly lost more than 7,000 soldiers, more troops than the number of U.S. forces killed in over 20 years of fighting in Iraq and Afghanistan combined, according U.S. intelligence estimates obtained by The New York TImes.

The U.S. State Department confirmed the death of a U.S. citizen Thursday after shelling by Russian troops in central Chernihiv.

Secretary of State Antony Blinken told reporters in Washington that “an American citizen was killed” but did not give further details.

U.S. President Joseph R. Biden Jr. told Micheál Martin, the Taoiseach of Ireland, Thursday that he considered the war in Ukraine to be “inhumane.”

Biden’s comments came at the start of a virtual meeting between the two leaders on St. Patrick’s Day, which honors the foremost patron saint of Ireland. They had been scheduled to meet in person, but the plans changed after Martin tested positive for the coronavirus.

“We meet at a moment when demands on unity in the world are really accelerating,” Biden said. “We have to be united. We certainly are. But [Russian President Vladimir] Putin’s brutality, and what he’s doing and what his troops are doing in Ukraine, is just inhumane.”