The professional troll took over the council meeting to perform a rap about the Russian president.
By Joseph Golder March 17, 2022
Facebook
Twitter
Linkedin
Email 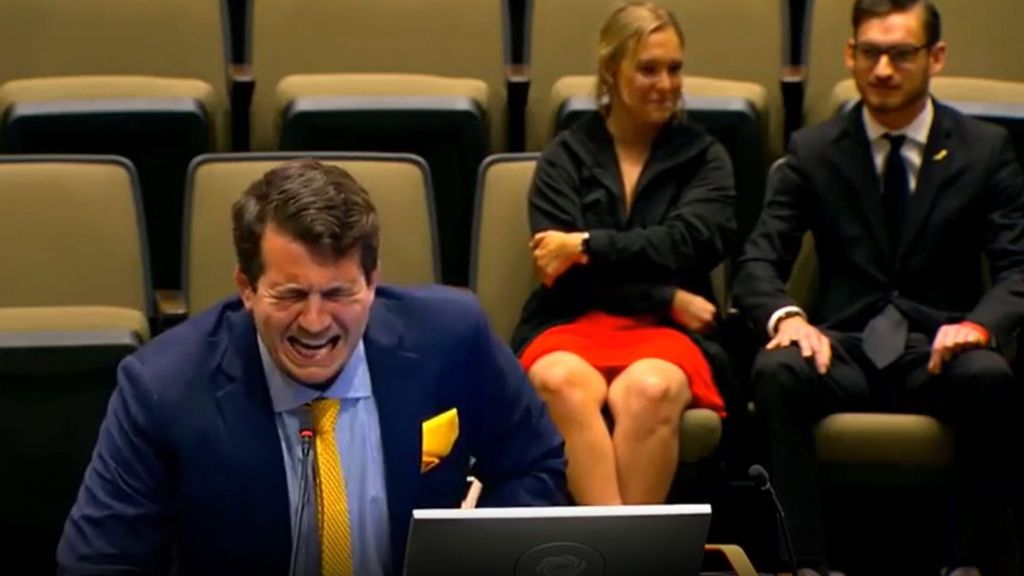 A comedian hijacked a city council meeting in Texas to perform his “Vladimir must die” rap song — in reference to Russian President Vladimir Putin — which called on people to “go insane for Ukraine” and “put a bullet in Putin’s brain.”

Russia invaded his neighbor Ukraine on Feb. 24 in a move that has outraged much of the world and led the International Court of Justice on March 16 to order Russia to immediately suspend military operations in the country.

The council meeting in Plano, Texas, on Tuesday, March 15.

The footage shows the comedian, real name Alex Stein, who also goes by “Primetimestein,” sauntering up to the lectern to address the council.

He wore a blue suit and a blue shirt with a yellow tie and a yellow handkerchief in his breast pocket, echoing the colors of the Ukrainian flag.

The professional troll, who made headlines with a vaccine rant at a council meeting in Dallas in early February, says that he has a presentation for those present before adding: “I want to take a moment to think about the people of Ukraine and what they’re going through, so I’ve prepared a little song for them.”

He proceeds to set up his background music with his phone while saying that he wants to help the Ukrainian people. Stein then begins his rap.

He calls on people to “go insane for Ukraine” and to “put a bullet in Putin’s brain.”

Despite some technical mishaps, the comedian bravely pushes through and delivers more biting remarks for the Russian head of state, whose style of rule has widely been described as autocratic.

Stein also complains that “gas prices are too high” and that “Putin has got to die.”

Repeatedly calling for someone to “put a bullet in Putin’s head,” he seems to segue into some rhymes about his support for the vaccine, presumably in reference to the COVID-19 pandemic.

He then shifts his focus back to Putin, calling him “a racist.” Shouting into the microphone and distorting the sound, the comedian appears to amuse the council members. Nine people are seated around the table smiling and apparently enjoying the performance, although one woman seated behind Stein appears to cringe.

Stein says that Ukrainian President Volodymyr “Zelensky is a VIP” and sings, “Ukraine and I go insane. Put a bullet in Putin’s brain!”

He adds: “You know that is the plan.”

Stein then seems to address President Zelensky directly, saying “I love you, Volodymyr Zelensky! You are so smart!” while two members of the audience behind him smile and giggle as he adds “What’s that smell? Did somebody fart?”

He then reverts to singing about the COVID-19 vaccine, holding up some sanitizer and saying that he has “the Pfizer.”

“You know I stick it in my vein. Put a bullet in Putin’s brain! Go in for Ukraine before I go insane,” he rapped.

He then finishes his song and, speaking normally, says: “I just wanna say, I love you, we need to take out Putin, like Lindsey Graham said.”

Sen. Lindsey Graham, R-S.C., made headlines on March 4 when he seemed to call for Putin to be assassinated, making a reference on social media to Julius Caesar, saying, “Is there a Brutus in Russia?” The Roman politician Marcus Brutus is most widely known for the assassination of Julius Caesar.

He has since doubled down on that, reiterating Wednesday that Putin needs to be killed and comparing him to the infamous Nazi dictator Adolf Hitler.