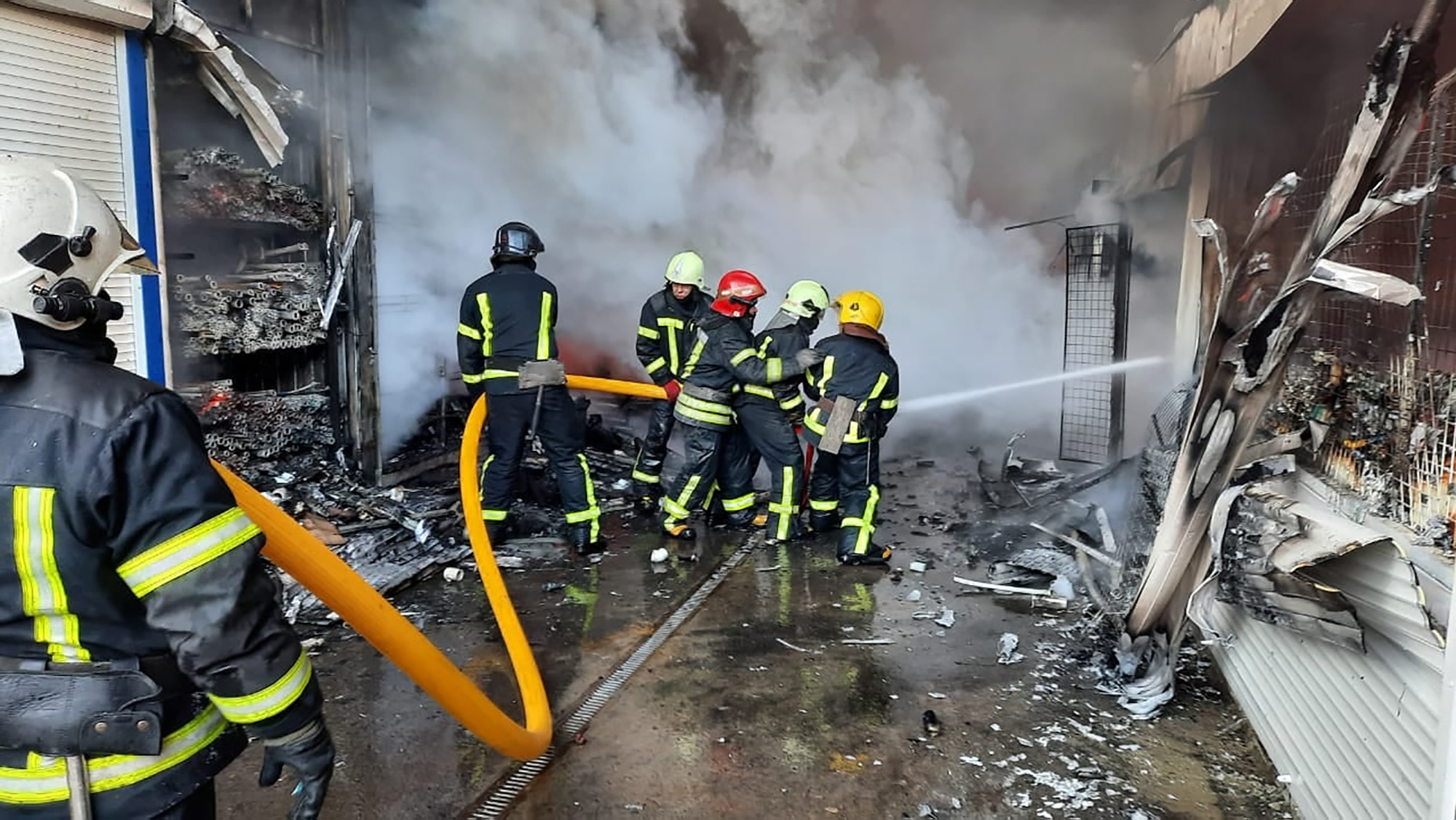 Three people were killed and five injured in the large-scale fire that broke out on March 16, 2022, in a market after Russian shelling in Kharkiv, Ukraine. (State Emergency Service of Ukraine/Zenger)

Footage shared by the State Emergency Service (SES) of Ukraine shows firefighters tackling a massive March 16 blaze that resulted from the shelling. It appears to have destroyed multiple buildings in the market area of the city, which was home to about 1.5 million people before the war began, in northeast Ukraine.

The SES said in a statement accompanying the video that the fire in Kharkiv was put out at 4:20 p.m. local time on Wednesday. It said that 51 people and nine technology units from its agencies were involved in fighting the fire.

The mayor of Kharkiv, Ihor Terekhov, said in a televised interview Tuesday that more than 600 buildings in the city have been destroyed since the Russian Armed Forces began their invasion, the Reuters news agency reported.

“Schools, nurseries, hospitals, clinics have been destroyed. The Russian army is constantly shelling (us) from the ground and the air,” Terekhov was quoted as saying.

The shelling of Kharkiv began on Feb. 24 when Russian President Vladimir Putin’s military invaded Ukraine in what the Kremlin is still calling a “special military operation.”

On Wednesday, the International Court of Justice (ICJ) in The Hague had ordered Russia to immediately suspend military operations in Ukraine in ruling in a case in which Kyiv had accused ”Russia of manipulating the concept of genocide to justify its military aggression.”

“Although the ICJ’s verdicts are binding, news reports questioned whether Moscow would abide by the ruling, and the court has no direct means of enforcing them,” the United Nations pointed out in a March 16 statement.

In a tweet posted shortly after the ruling, U.N. Secretary-General Antonio Guterres said that the majority decision “fully reinforces my repeated appeals for peace.”

“The civilian population affected by the present conflict is extremely vulnerable,” Joan Donoghue, president of the ICJ, said in delivering the court’s ruling. She pointed out that there have been “numerous civilian deaths and injuries … significant material damage, including the destruction of buildings and infrastructure.”

“Attacks are ongoing and are creating increasingly difficult living conditions for the civilian population,” Donoghue said. “Many persons have no access to the most basic foodstuffs, potable water, electricity, essential medicines or heating. A very large number of people are attempting to flee from the most affected cities under extremely insecure conditions.”