US Stemology and its owner sued for allegedly promising such procedures can cure serious ailments, including the coronavirus.
By Lee Bullen March 17, 2022
Facebook
Twitter
Linkedin
Email 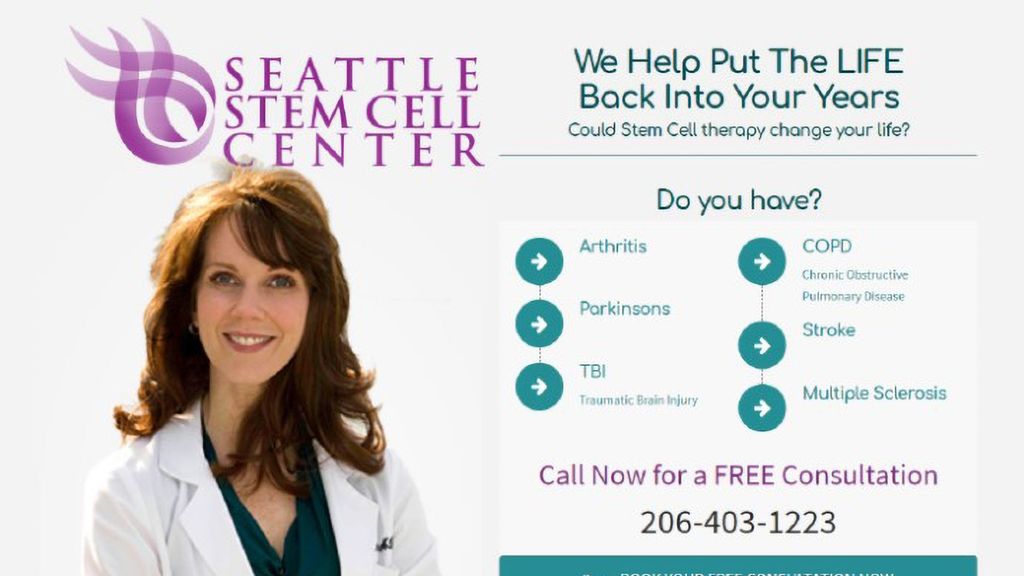 Seattle doctor Tami Meraglia is accused of selling fake cures for nearly $750,000, to treat COVID-19 and other medical ailments. (Washington State Office of the Attorney General/Zenger)

The Washington State Attorney General’s Office has launched a lawsuit against a Seattle-based company for deceptively marketing stem cell treatments for COVID-19 and dozens of other serious medical conditions.

State Attorney General Bob Ferguson said he filed the lawsuit against the company, US Stemology, and owner Dr. Tami Meraglia because there is “no reliable clinical evidence stem cell therapy can effectively treat these conditions.”

The company, which runs the Seattle Stem Cell Center in Seattle’s Lower Queen Anne neighborhood, has allegedly charged 107 people a total of $748,250 for these unsubstantiated treatments, the Washington State Attorney General’s Office said in a March 15 news release. More specifically, the company charged its clients as much as $10,000, out of pocket, for participating in the clinic’s purported “patient-funded research.”

“US Stemology claimed it was treating patients as part of clinical trials,” the statement continued. “In reality, the ‘trials’ did not follow generally accepted standards of scientific research, and the researchers themselves led the [so-called] ‘independent review’ of the trials.”

“Dr. Meraglia and US Stemology advertised stem cells as a life-changing miracle cure that could treat almost anything — even COVID,” Ferguson said. “They preyed on people’s fears and frustrations about their health to sell hundreds of thousands of dollars in unproven treatments. Their conduct brings to mind a 21st century version of snake-oil sales tactics.”

As of this posting, neither Meraglia nor the company had responded to media inquiries about the lawsuit. Visitors to the US Stemology website do encounter this notice: “Due to the recent changes in FDA enforcement practices regarding stem cell therapy, we are no longer accepting patients for stem cell treatment at Seattle Stem Cell Center…”

Ferguson’s office was first alerted to this case when a concerned Washingtonian reported the company’s false claims that it could treat and prevent COVID-19. The company made these claims for at least three months in the early stages of the pandemic.

“After the Attorney General’s Office sent a cease and desist letter, the company removed from its website the claims that stem cells are effective against COVID-19,” the release notes.

“While looking into the consumer complaint, investigators at the Attorney General’s Office discovered that the company claimed it could treat dozens of other conditions — including serious heart, autoimmune and neurological conditions— without reliable scientific evidence that stem cell treatments are effective in treating them.”

The company began marketing that it could treat these conditions starting as early as 2018. Meraglia began the stem cell clinic out of the basement of the medispa she owned, which mostly performed aesthetic and cosmetic treatments at the time.

“The Seattle Stem Cell Center performed its stem cell ‘treatments’ on over a hundred patients for a host of serious, chronic conditions, including asthma, muscular dystrophy, stroke, diabetes and Crohn’s disease,” the release from Ferguson’s office said.

After the Attorney General’s Office began its investigation, US Stemology stopped taking new stem cell patients in June 2021. However, many of its other deceptive treatment claims remain listed on its website.

The lawsuit asks the court to require US Stemology “to stop its unlawful conduct, including all unsubstantiated claims about stem cells … and pay full restitution back to patients who paid for treatments at the Seattle Stem Cell Center, a total of at least $748,250.”

The Attorney General’s Office added that the company is being fined $12,500 in civil penalties for each violation of the Consumer Protection Act, including enhanced civil penalties of $5,000 per violation because US Stemology’s misleading claims targeted people with disabilities.

In all, the office estimated that the penalties in this case could total in the millions of dollars.

«Previous Post
Mitigating The Effects Of Gender Bias In Clinical Trials»Next Post
The Longer A Person Stays Fat, The More Likely They Are To Develop Bowel Cancer, Researchers Say