Risk Of Severe Thunderstorms Shifts Back To South Central States

Eastern Oklahoma through northeastern Texas and much of Louisiana will face a threat of localized flash flooding and large hail.
By Ryan Adamson March 17, 2022
Facebook
Twitter
Linkedin
Email 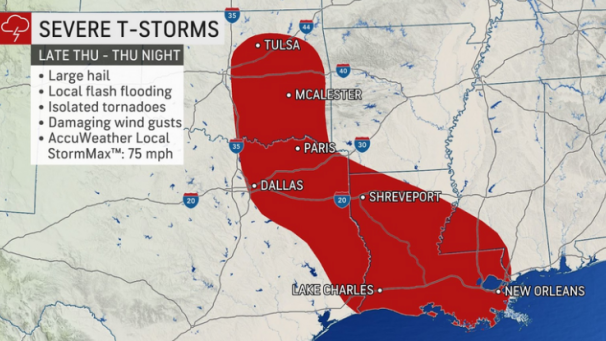 The battle between the fading winter and oncoming spring often leads to a dramatic uptick in the frequency of severe weather events in March. (AccuWeather)

Hail, flash flooding, high winds and even some isolated tornadoes are possible across the South on Thursday and Friday as severe thunderstorms rumble across the region, AccuWeather forecasters say.

The severe weather risk will shift farther to the west on Thursday after potent storms swept through areas from Louisiana to Florida and the Carolinas earlier this week. That includes the Birmingham, Alabama, area which was inundated by a slow-moving storm that produced widespread flash flooding in the city on Wednesday. Forecasters say that the Southeast may again have to deal with volatile weather again on Friday.

Although Thursday should begin quietly across Oklahoma and Texas, a strengthening area of low pressure will move from the Texas Panhandle into western and southern Oklahoma later in the day. Warm and moist air will interact with the low, and thunderstorms will begin to develop quickly late in the day and especially by Thursday evening.

A zone from eastern Oklahoma through northeastern Texas and much of Louisiana will face a threat of localized flash flooding and large hail. The highest risk for isolated tornadoes will be in far southern Louisiana, including New Orleans. Storms in that area may also contain damaging wind gusts, and that may also be the case in far southeastern Oklahoma and far northeastern Texas.

More than 11.6 million are facing a “slight” risk of severe weather on Thursday, according to the National Weather Service’s Storm Prediction Center. This includes large metro areas such as New Orleans and Oklahoma City.

Thunderstorms are forecast to continue into Mississippi late Thursday night into early Friday morning, but they are also likely to be weaker than earlier in the day. This line may then reintensify as it moves into Alabama, the Florida Panhandle and western Georgia later Friday morning and into Friday afternoon. The thunderstorms on Friday can produce intense rainfall, hail, damaging wind gusts and isolated tornadoes anywhere in the threat zone.

“In many cases in late winter and early spring, moisture is lacking in northern areas, leading to less organization of severe weather because the atmosphere simply does not have all of the ingredients that it needs,” explained AccuWeather Meteorologist La Troy Thornton.

Even though less moisture will be available, the atmosphere will remain volatile enough that a few brief tornadoes could occur on Friday afternoon and Friday evening. Otherwise, wind and hail will be a threat in western Kentucky and western Tennessee. Nearly 10 million are facing a slight risk of severe weather on Friday, according to the SPC.

A relative break in severe weather is expected over the weekend, but an even more substantial threat may arise by early next week.

“Sufficient moisture should again be in place, leading to the possibility of all modes of severe weather to be in play in Oklahoma and Texas, if not beyond,” said Thornton.

The battle between the fading winter and oncoming spring often leads to a dramatic uptick in the frequency of severe weather events in March.

“This is the time of year when winter storms begin to be replaced by severe weather events as temperatures rise and atmospheric moisture, which is fuel for thunderstorms, increases,” noted Thornton.

April and May are typically the peak months for severe weather, and the areas at risk slowly expand as higher temperatures move northward. AccuWeather meteorologists recently released a forecast for the severe weather season that calls for an uptick in tornadoes in 2022 compared to recent years.