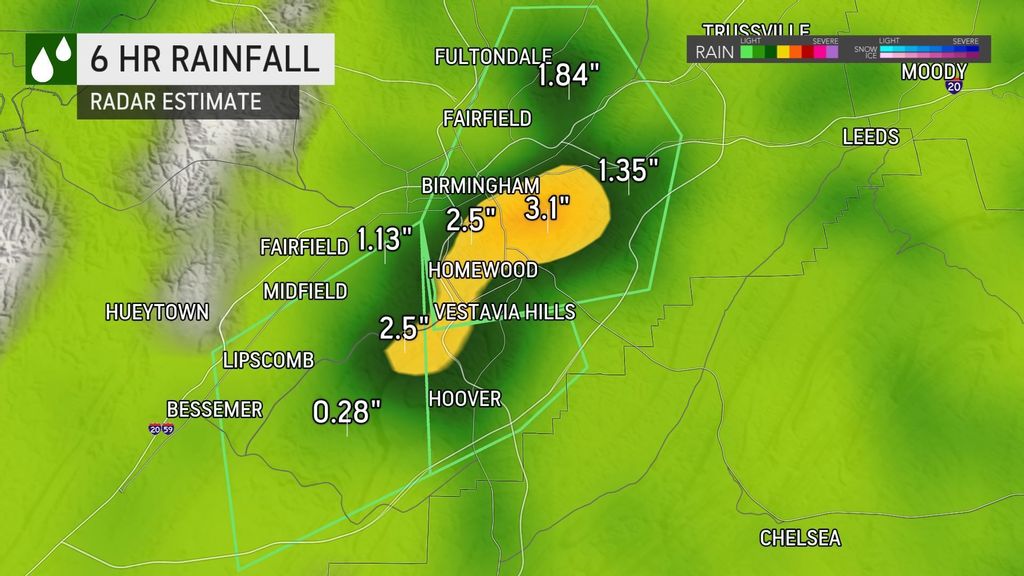 A low pressure area slowly moving through the Southeast Wednesday resulted in a torrential downpour and flooding in Birmingham, Alabama. (AccuWeather)

A surge of floodwaters rushed through Birmingham, Alabama, Wednesday afternoon, giving way to serious travel issues throughout the area.

Flooding began to emerge in the 3 p.m. EST hour Wednesday, as intense rain barreled down on Birmingham due to a nearly stationary thunderstorm. The hardest-hit areas in the afternoon were in the southwest sector of the city, namely the neighborhoods of Oxmoor and Huntington Park.

The torrential downpour on Birmingham was a result of a low pressure area slowly moving through the Southeast Wednesday, according to AccuWeather meteorologist Danielle Knittle, already causing locally severe thunderstorms throughout portions of central Florida.

“However, closer to Birmingham, showers and thunderstorms blossomed right under the upper-level low and, with little wind aloft, these storms moved very slowly and trained over the same area,” Knittle said. “Torrential downpours over this small area quickly led to radar estimated totals of 1.5 to 3 inches of rain in a very short period of time.”

Birmingham’s office of the National Weather Service provided an update to area travelers within that 4 p.m. hour, telling those in the area to “please avoid travel in downtown Birmingham.” The NWS update also mentioned ongoing water rescues, impassable roads and cars swept away in floodwaters due to the rain.

Birmingham ABC 33/40 News also confirmed that Birmingham Fire and Rescue Service Department, as well as the Birmingham Police Department, were “already responding” to multiple water rescue efforts. There are no reports of injuries thus far.

The flooding also reached the campus of the University of Alabama at Birmingham, as local resident Andy Rains caught on his phone during the afternoon hours. UAB’s Emergency Management division noted that students should remain “weather aware” and that they should “not drive through standing water.” Multiple road closures on the campus were also reported.

Another Birmingham resident, Ben Blackerby, posted video from the Crestwood area of the city, capturing the potent downpour.

@spann Flooding in Crestwood. An area that doesn’t normally flood too. Can’t believe flash flood warnings haven’t been issued yet. It’s gotta be worse in other places. pic.twitter.com/9ZanHAAYIF

A six-hour AccuWeather radar estimates more rainfall coming to the central and northeast portions of the city in the evening, but not with the same intensity as the impetus for afternoon flooding.

“The heavy downpours have weakened and lingering showers in the area early this evening will taper off and slowly move off to the east,” Knittle said. “The clouds will clear some through the first part tonight before some areas of low clouds and perhaps even some patchy fog form overnight.”