The storm system will cover nearly the entire country with a variety of hazardous impacts.
By Alex Sosnowski March 17, 2022
Facebook
Twitter
Linkedin
Email 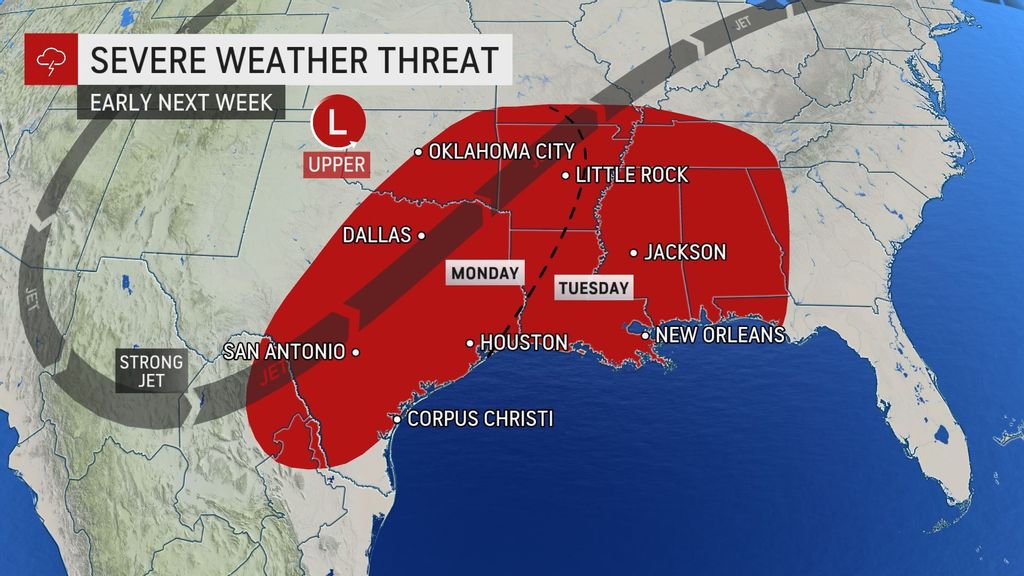 At some point next week, the storm may affect just about every state from the Rockies to the Atlantic coast. A storm of this magnitude and scale is likely to bring significant risk to lives and property and could result in substantial ground travel, shipping and airline delays, AccuWeather meteorologists say. (AccuWeather)

A colossal storm is brewing for the United States, AccuWeather meteorologists say.

The storm system, which is expected to be as expansive as it is dynamic, is forecast to unfold as winter transitions into spring and will cover nearly the entire country with a variety of hazardous impacts including a widespread tornado risk, blizzard conditions and serious flooding.

“Next week has the potential to bring not only the most significant storm of March, but perhaps the entire year so far considering the duration and all of its impacts combined ranging from severe weather and tornadoes to flooding and snow and blizzard conditions as well,” said AccuWeather Lead Long-Range Meteorologist Paul Pastelok adding, “This could end up being the worst storm of all of 2022 if the system and its impacts reach the maximum potential.”

At some point next week, the storm may affect just about every state from the Rockies to the Atlantic coast. A storm of this magnitude and scale is likely to bring significant risk to lives and property and could result in substantial ground travel, shipping and airline delays, AccuWeather meteorologists say.

The storm could take most of next week to travel from the Rockies and Plains to the Great Lakes and Atlantic coast. During this time, severe weather and flooding problems will be intertwined along the warmer portion of the storm on its southern and eastern sides while strong winds with snow and possible blizzard conditions are forecast to develop on its northern and western edges.”

“Some locations may be hit by more than one round of severe thunderstorms and torrential downpours as there may multiple storm ‘spin-offs’ with their own weather embedded within the giant storm system,” Pastelok said.

All facets of severe weather will be possible with the massive storm system with impacts ranging from large hail and flash flooding to strong wind gusts and tornadoes.

“The worst time period in terms of the extent of severe weather and tornado risk is late Monday through Tuesday night,” Pastelok said.

Forecasts for next week’s severe weather danger are still highly subject to change, but AccuWeather forecasters currently project the first thunderstorms to erupt Monday afternoon and evening in central and eastern portions of Texas and Oklahoma and progress eastward later Monday night into parts of Arkansas and Louisiana. On Tuesday, the prime threat of severe weather is likely to shift from Arkansas and Louisiana to Mississippi and western Tennessee. The storms may then progress farther to the east in Tennessee and Alabama Tuesday night.

The actual number of tornadoes that could be produced by the storm system will depend on a range of weather parameters including the amount of daytime heating, moisture in the atmosphere and a phenomenon called wind shear. High temperatures in the 60s, 70s and even the 80s F are likely ahead of the storms.

The risk of severe weather is not likely to stop over the Tennessee Valley and central Gulf Coast region. Experts say storms will continue to shift toward at least part of the Eastern Seaboard. “From late Wednesday to Thursday, the severe weather potential that may include a few tornadoes is likely to be greatest in the Carolinas,” Pastelok said.

Heavy and gusty thunderstorms may also pivot through portions of the Ohio Valley, Great Lakes and the Northeast as the storm advances from the middle to latter half of next week, but lower temperatures, as well as drier air in the Northeast, may limit the scope of severe weather.

Another significant aspect will be the likelihood of flooding.

The storm has the potential to bring a massive area of rainfall to much of the eastern half of the nation with totals ranging from 1 to 2 inches. About 2 to 4 inches of rain with locally higher amounts may be unloaded from northeastern Texas and eastern Oklahoma to central Alabama, much of Arkansas, Louisiana, Tennessee and Kentucky and the southern portions of Missouri, Illinois and Indiana from Monday to Wednesday.

Within this heavier rainfall zone, incidents of flash urban and small stream flooding are likely. Earlier this week, a thunderstorm dumped 1-2 inches of rain in an hour’s time and turned streets into torrents of water in Birmingham, Alabama. Some communities could face a similar scenario with this storm system next week. Significant rises on some of the major rivers are also anticipated along with the possibility of flooding on some of the secondary rivers.

“Despite the significant risk of flooding from the major storm, areas from the Plains and parts of the Southern states and Midwest are in need of soaking rainfall,” AccuWeather Senior Meteorologist Brett Anderson said. Portions of Texas, Oklahoma and Kansas are in exceptional drought, according to the United States Drought Monitor. This category is considered to be the most severe in terms of drought conditions. Unfortunately, much of the soaking rain may miss the neediest places over the southern Plains.

“On the storm’s cold side, an all-out blizzard may unfold in parts of Colorado, southeastern Wyoming, northern New Mexico and the Nebraska Panhandle,” AccuWeather Chief On-Air Meteorologist Bernie Rayno said.

The storm could be significantly impactful in the Denver metro area, which was hit with several inches of snow from Wednesday night to Thursday. Less than a week later, a few feet of snow could fall on portions of Colorado from the new storm.

Snow is likely to ramp up over portions of the central and southern Rockies by Sunday night as cold air invades the region, but the peak of the storm in terms of snowfall and wind intensity is expected to occur from Monday to Tuesday. Temperatures over the region will plunge from the 50s and 60s over the weekend to the 20s and 30s on Monday and Tuesday. Major travel disruptions are likely along portions of interstates 25, 70 and 80.

Heavy snow and potential blizzard conditions could even expand farther to the north and east over the Plains and Upper Midwest toward the middle of next week, while problems associated with heavy rain and flooding could occur in the Northeast by the end of the week.

AccuWeather will continue to provide updates on this massive storm system in the coming days.