A Study Of Grasshopper Jaws Reveals Similarity To Mammals, Diversity Of Diet

3D imaging of grasshoppers' mandibles avoids the destruction of samples and may be used with other species.
By Martin M Barillas March 17, 2022
Facebook
Twitter
Linkedin
Email 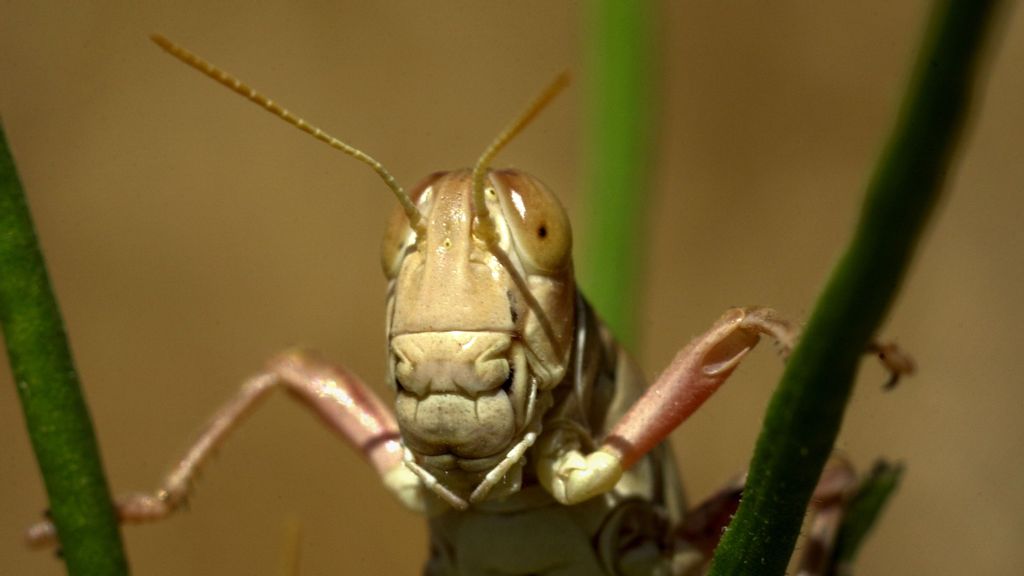 A grasshopper clings to the grasses of the Carrizo Plain National Monument, June 1, 2001. President Bill Clinton established the national monument in his final days in office to save the last large remnant of the aboriginal ocean of grassland that once covered central California. (David McNew/Getty Images)

New research combines analytical tools and a nondestructive method to examine museum collections of various grasshopper species and reveal their dietary patterns, even decades after the collection of samples.

In a study published in the journal Methods of Ecology and Evolution, scientists revealed how they used 3D imaging techniques to precisely map the shape of a grasshopper’s mandible, or lower jaw, revealing previously unknown similarities to mammals through modeling.

“Knowing what animals eat is fundamental to understanding ecosystems, but working this out can be difficult and time-consuming, especially if the animals you study are rare, small or move quickly,” said lead author Chris Stockey of the University of Leicester in England.

Currently, there are approximately 11,000 known species of grasshoppers, which play important roles in grasslands and other ecosystems. Surprisingly, some of them are carnivorous.

Grasshoppers lack teeth, and their mandibles differ according to their diet. While some have molar-like mouthparts for grinding tough foods such as grass, others have sharp edges for cutting. Because previous approaches of classification were imprecise, grasshoppers were assigned only to broad feeding categories.

Analyzing grasshoppers’ role in ecosystems had previously proven difficult because it required precise studies of their guts or detailed observations of feeding habits in the wild to find out what they eat. The new, nondestructive method developed at the University of Leicester allows researchers to easily investigate the grasshoppers’ dietary habits, even among rare or extinct species.

“Surprisingly, comparing the mandible landscapes of grasshoppers with mammals’ teeth allows grasshopper diet to be predicted with 82 percent accuracy — pretty amazing when you consider that the mouthparts of mammals and grasshoppers have evolved independently for 400 million years and were not present in their common ancestor,” said Stockey.

The researchers examined museum collections holding millions of samples that remain unseen by most visitors. In fact, samples collected by Charles Darwin, whose 19th-century transglobal voyage on the research ship Beagle led to his theory of evolution, still surprise scientists by providing evidence of new species every year.

“We measured the shapes of grasshoppers’ mouthparts and analyzed them like the topography of a landscape and found clear differences linked to diet,” said study co-author Mark Purnell of the University of Leicester. He said that meat-eating grasshoppers have steeper slopes and sharper cliff edges on their mandibles, while those that eat grass and other tough plant material “have mandibles with complex undulating ‘landscapes.’”

The new method developed by the team means samples will not need to be dissected, which is a slow process that damages specimens and renders them less useful for future use.

Ben Price of the Natural History Museum in London said the study’s nondestructive method of “combining modern analytical methods with historical samples from museum collections” may in time “reveal the diet information for thousands of species decades after the specimens were collected.”