A rainstorm is likely to end with accumulating snow across a narrow corridor of the Plains and Midwest.
By Alex Sosnowski March 16, 2022
Facebook
Twitter
Linkedin
Email 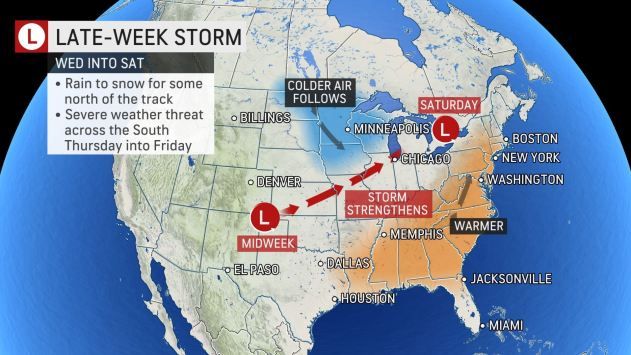 A slight shift in the track of the storm could push the snow band farther to the north or south a bit. (AccuWeather)

Spring will begin on Sunday, March 20, at 10:30 a.m. CDT, but Old Man Winter will squeeze in one more snowfall across portions of the central United States before winter officially ends.

A rainstorm is likely to end with accumulating snow across a narrow corridor of the Plains and Midwest, including from central Kansas to northern Michigan, from Thursday night to early Saturday. Much of the snow will melt as it falls on roads since the blast of winter weather will follow days of warmth across the region. However, there can still be areas of slushy and slippery travel, AccuWeather meteorologists caution.

Prior to the winter precipitation, springlike warmth is in store for the region. Temperatures are forecast to climb into the 60s and 70s over much of the central Plains and Midwest as highs will be in the 40s and 50s over the northern tier of the Central states through Thursday.

The storm that will eye the north-central U.S. will first dip southeastward across the Rockies into Thursday. Snow will fall over the higher elevations across much of Colorado, including outside of the mountains. Denver, which sits at about 5,500 feet above sea level just east of the Rockies, is set to receive several inches of snow from the storm.

But, even as the storm pivots northeastward and over progressively lower elevations of the Plains and Midwest from Thursday night to Friday night, snow is still likely to come into play.

“The storm will slowly strengthen, and as it does, it will begin to drag down colder air from the middle layers of the atmosphere,” AccuWeather Chief On-Air Meteorologist Bernie Rayno said. “There may also be a small fresh injection of cold air from the northern Plains that can be drawn in at the last minute.”

Both of these factors are likely to produce a rather narrow swath of rain that will become mixed with and even change to snow from central Kansas on Thursday night to northern Michigan on Friday, Rayno explained.

Snow intensity and accumulations will depend on the timing and amount of strengthening the storm undergoes. For instance, if it strengthens quickly, then it will be more likely to bring a change to a period of heavy, accumulating snow to its northwestern flank.

Meanwhile, for other cities like Des Moines, Iowa, Madison and Green Bay, Wisconsin, and Traverse City, Michigan, a snowfall of 1-3 inches with locally higher amounts is anticipated. Some of these cities are pacing well below average in terms of winter snowfall. For instance, snowfall has been about 56% of average in Madison with just under 26 inches this winter.

A slight shift in the track of the storm could push the snow band farther to the north or south a bit.

“Regardless of the amount of snow, most of the accumulating snow will tend to be on non-paved and elevated surfaces with this storm,” Rayno said.

But, AccuWeather forecasters warn that there will be some exceptions. There can be areas of slush and slippery travel, especially where the snow falls during the late night and start of the day.

Farther to the south and east, the storm will drop rain from the southern Plains to the Mississippi and Ohio valleys during the latter part of this week as well as in the Northeastern states during the first part of the weekend. Minor travel delays could result from the wet conditions and low visibility.

Flooding could still result from the storm despite the relatively light amounts of rain forecast. A general 0.50 of an inch to 1 inch of rain is predicted from the eastern parts of Kansas and Oklahoma to northern New England with local amounts of up to 2 inches possible. Water levels are already elevated due to melting snow across the northern tier, and additional run-off triggered by the rainfall could lead to surges and minor flooding on some small streams and rivers.

The same storm is also likely to produce pockets of severe thunderstorms from Texas and Oklahoma to Georgia and northern Florida late this week. Locally heavy and gusty thunderstorms may occur as far north as the Ohio Valley on Friday.

AccuWeather meteorologists are already monitoring the potential for a stronger storm system that may trigger a more widespread zone of severe weather and flooding across portions of the Central states early next week.