VIDEO: US Worker Moves Into Office Cubicle To Protest The Cost Of Living 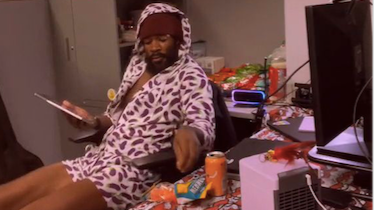 An American man has moved into his cubicle at work, saying he can't afford rent on his salary. (@calm.simon/Zenger)

The pandemic has upended office life. Many people now prefer to work remotely at home. That reality has compelled companies to devise new requirements, if any, for in-office appearances. Other firms miss the workplace culture and deem it essential to schedule staffers’ return to headquarters.

An American office worker, Jackson has moved into his work cubicle to protest the emerging cost-of-living crisis — and grabbed 12 million views on his Calm Simon TikTok in the process.

He has arranged books, appliances and kitchen items on a shelf, neatly hung his clothes and uses a large storage space as a bed.

He said: “I am moving from my apartment and into my cubicle at work … They do not pay me enough to do both. So as a matter of protest, I am just going to live at my job.

“We’ll see how long I can get away with this.”

The clip shows Jackson unpacking his belongings into work shelves and office drawers.

He explained there are showers available in the company’s second building and that he keeps his food, mostly ham and pineapple, in the staff-room fridge.

Jackson told Zenger he “moved in” to his new home last week and sleeps under his desk. “I’ve saved money by living in my car in the past, but in my current city, I have no car … but I have a cubicle!

“I have spent four days here in total so far. Truly, I started this just to save money in between apartments, and I posted the TikTok mostly as a joke… then it blew up.”

Jackson isn’t worried about his employer discovering his secret. He said no one he works with is on TikTok. He called his plan “a way of saving money.” But said he cannot comment on the effectiveness of his move as a protest just yet.

There is a bit of a literary precedent for Jackson.

In 1853, Herman Melville, famed for his masterwork “Moby Dick,” wrote “Bartleby the Scribner, A Story of Wall-Street.” Bartleby works as a copyist in a lawyer’s office and informs him that he will not be copying anymore, simply stating: “I prefer not to.”

It’s soon discovered that Bartleby also lives in the office, but refuses to discuss his personal life or move out. It’s not until new tenants take over the premises, that Bartleby is forced to vacate.

«Previous Post
Burnt Out: People Are Bored By Cooking The Same Meals Over And Over Again»Next Post
‘Peaky Blinders’ Superfan Spends Nearly $8,000 On Tattoos Devoted To The BBC Gangster Show