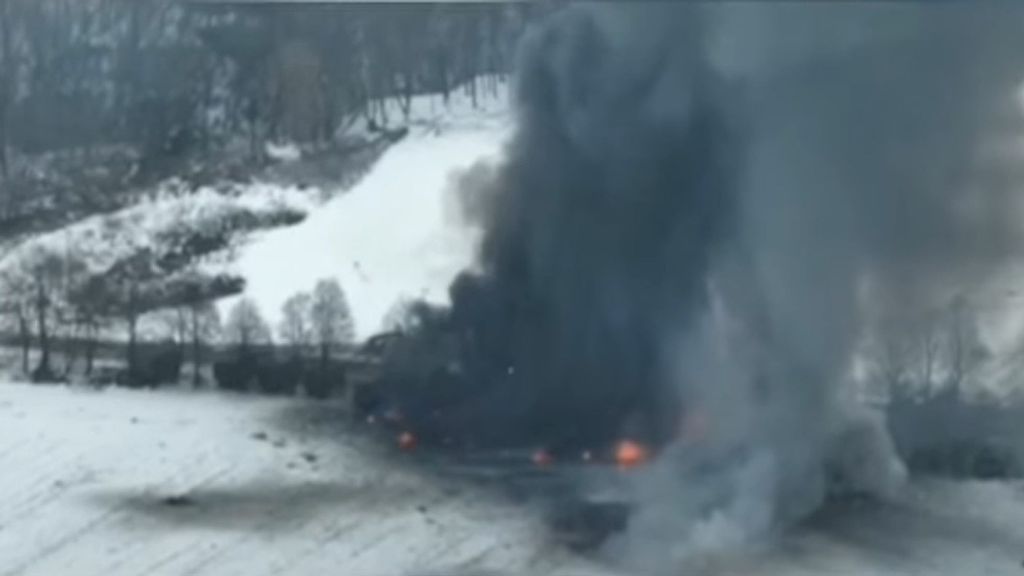 Soldiers of Ukraine's 93rd Brigade “Cold Gorge” destroyed Russian military equipment at the train station in Trostyanets, Ukraine, as seen in this screenshot from a video. (@93OMBr/Zenger)

The bombing of a Russian howitzer division basing itself at a Ukraine railway station led members of the Ukrainian military to say that victory was getting closer “every day.”

The attack took place at the Trostianets railway station in the city of Trostianets in Ukraine’s northeast overnight on March 15–16.

“Good news for your timeline. Fighters of the 93rd brigade of the Cold Yar at night managed to jewel the Gaubic artillery division of the occupant 2C19 ‘Msta-C’ [howitzer],” Ukraine’s 93rd Mechanized Brigade, a formation of the Ukrainian ground forces, said in sharing the footage online.

“The enemy placed a device on the square of the railway station in Trostianets in the region of Sumy Oblast. To stop the occupant’s procedure and not cause serious damage to civil infrastructure was a difficult task. However, the cold-hearted soldiers managed to cope with it,” the brigade said in a statement.

“Every day is a step closer to victory!” the brigade said, a message also expressed by the General Staff of the Armed Forces of Ukraine in its release of a video of the railway station incident.

Humanitarian aid has reportedly been distributed among residents of occupied Trostianets in a war now three weeks old.

Ukrainian forces also apparently scored several other recent victories — one came with the destruction of a Russian fighter jet over the skies near the city of Kharkiv in northeastern Ukraine. The Land Forces of the Armed Forces of Ukraine shared footage of the incident on social media.

The Russians were thwarted in their attempts to take Kharkiv from the northern neighborhood of Piatykhatky, regional administrative chief Oleg Sinegubov said, according to Ukrainian TV channel NTV.

The Russians were also defeated in Ruskie Tyszki in a battle that raged for over an hour, and retreated to their previous positions in the region, NTV reported.

The Ukrainian gains on the battlefield come as U.S. President Joseph R. Biden Jr. on Wednesday offered details on how an additional $800 million in U.S. aid to Ukraine would be spent, CNBC and other news media reported,

The money will help pay for 800 anti-aircraft systems to combat attacks of Russian warplanes, 9,000 anti-armor systems, 7,000 weapons, including 100 grenade launchers, 5,000 rifles, 1,000 pistols, 400 machine guns and 400 shotguns. Twenty million rounds of ammunition for artillery are also part of the aid package.

“The world is united in our support for Ukraine and our determination to make [Russia’s President Vladimir Putin] pay a very heavy price,” Biden said from the White House. “America is leading this effort, together with our allies and partners, providing enormous levels of security and humanitarian assistance that we’re adding to today, and we’re going to continue to do more in the days and weeks ahead.”

On Tuesday the U.S president signed an annual spending bill that contains $13.6 billion in humanitarian and military aid to Ukraine.

Ukrainian President Volodymyr Zelensky urged Biden and U.S. lawmakers in a video address to Congress Wednesday to do even more, including providing more potent air-defense systems and establishing a Western nation-enforced no-fly zone. Such a move has been rejected as launching a world war with Russia.