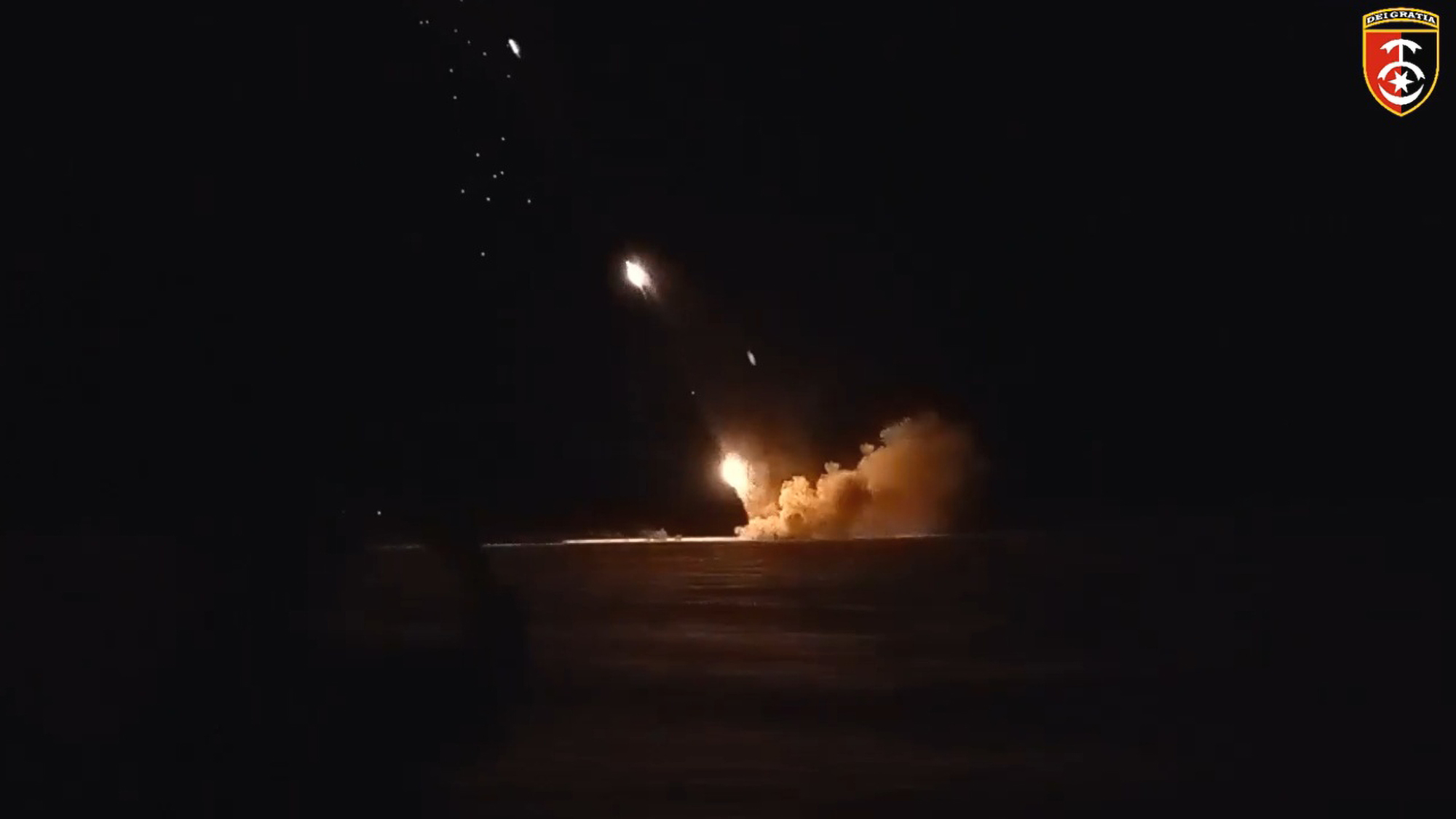 Soldiers of Ukraine's 30th Separate Mechanized Brigade, named after Prince Constantine of Ostrozky, fire on the Russians in Ukraine as seen in this screenshot from a video. (@30brigade/Zenger)

Soldiers in Ukraine’s 30th Separate Mechanized Brigade opened fire with artillery on Russian positions at night to “greet” the invading forces “warmly,” as they put it.

The exact location where the images shared by the brigade were filmed was not revealed, but the 30th Separate Mechanized Brigade is reportedly operating in the contested Donetsk region, in eastern Ukraine, and is headquartered in the city of Novohrad-Volynskyi in the country’s north.

Russian President Vladimir Putin said in late February that he would recognize Donetsk and Luhansk, also in eastern Ukraine, as independent states and that he would send what he called “peacekeeping forces” to them. The move foreshadowed Russia’s full-scale military invasion, which Putin calls a “special military operation” that began on Feb. 24 and has since become the largest armed conflict in Europe since World War II.

The 30th Separate Mechanized Brigade said in a March 15 statement accompanying the video that it was looking forward to reading about “the enemy’s losses” in reports the following day. It signed off in Ukrainian with the increasingly recognizable slogan “Slava Ukraini!” (“Glory to Ukraine!”).

“Soldiers of the 30th Separate Mechanize Brigade, named after Prince Constantine of Ostroh, do not give the Russian invaders any chance to survive,” the statement said. “These uninvited guests stopped for a night’s rest, so our artillerymen greeted them warmly.”

The 30th Mechanized Brigade can trace its history at least to World War II, when it initially served as a Soviet cavalry unit before being converted into a mechanized division in 1945. It officially became part of the Ukrainian military in 1991, when the Soviet Union collapsed.

The brigade ditched all its Soviet decorations and references in 2015. In 2018, by presidential decree under the government of Petro Poroshenk, it was given a new honorific title, “Prince Constantine of Ostroh,” in reference to Konstanty Ostrogski, a military leader and Lithuanian prince who took part in military campaigns against Tatars and the Grand Duchy of Moscow at the end of the 15th century.

He went on to take part in other victorious military campaigns against Russia.

Ukrainian gains on the battlefield come as U.S. President Joseph R. Biden Jr. on Wednesday offered details on how an additional $800 million in U.S. aid to Ukraine would be spent, CNBC and other news media reported,

The money will help pay for 800 anti-aircraft systems to combat attacks of Russian warplanes, 9,000 anti-armor systems, 7,000 weapons, including 100 grenade launchers, 5,000 rifles, 1,000 pistols, 400 machine guns and 400 shotguns. Twenty million rounds of ammunition for artillery are also part of the aid package.

“The world is united in our support for Ukraine and our determination to make [Russia’s President Vladimir Putin] pay a very heavy price,” Biden said from the White House. “America is leading this effort, together with our allies and partners, providing enormous levels of security and humanitarian assistance that we’re adding to today, and we’re going to continue to do more in the days and weeks ahead.”