The growing problem has spread to parking lots all along the border.
By Anamarija Brnjarchevska March 16, 2022
Facebook
Twitter
Linkedin
Email 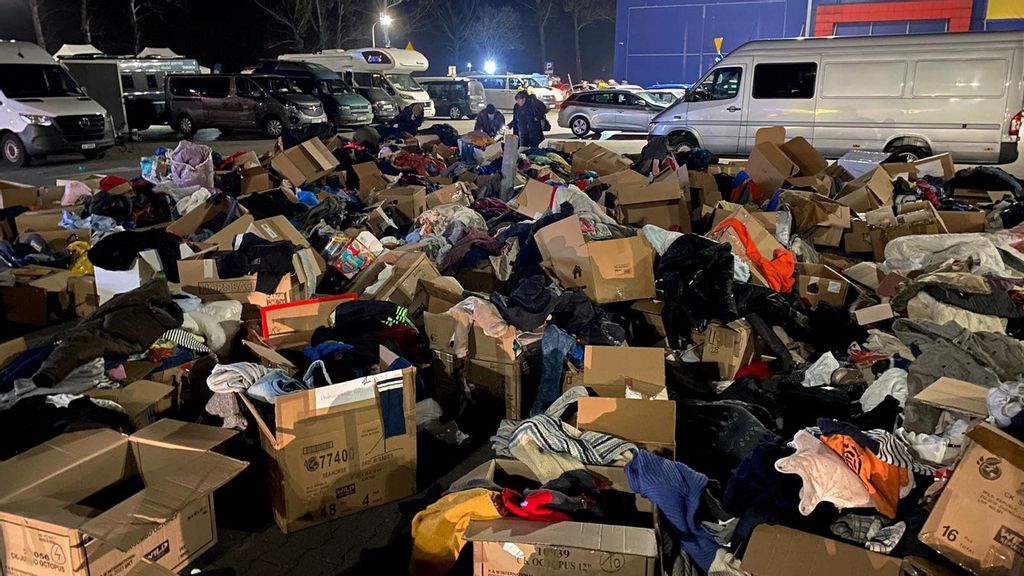 Donated clothing lies abandoned in a parking lot on the Polish-Ukrainian border. (Zenger)

Piles of clothing donated by well-meaning Europeans have reportedly been dumped and abandoned in a parking lot on the Polish-Ukrainian border.

Volunteer Charlie Hannerton, 27, took photos of the mess of clothing and bedding in the border town of Medyka, near Przemysl, in Poland.

He claims the donations arrive by the truckload from all over Europe, but volunteers don’t have time to sort through the unlabeled and unsorted boxes.

Properly labeled and sorted boxes with required items such as sanitary napkins and diapers are taken to a nearby warehouse and handed out to refugees, he said.

But boxes of assorted clothing are dumped in a nearby parking lot because staff haven’t got the time to sort through them.

Hannerton, from Falmouth, Cornwall, said refugees are arriving on foot and don’t spend long enough at the border point to sort through clothes. In addition, they can only take what they can carry.

The news comes after a number of humanitarian charities urged well-wishers to donate money to a reputable charity rather than sending miscellaneous donated items.

Hannerton saw the boxes being abandoned while at work in Medyka, Poland, on March 9 and 10.

He noted that other volunteers he had met in the area had reported similar mountains of dumped items at nearly every border-crossing point.

“The point I think I was trying to make with the pictures is that when the volunteers on the border say no clothes donations, they really mean no clothes.

“The refugees and volunteers on the border simply don’t have enough time to give them to people.

“When the refugees arrive, they’re literally brought into the camp and then immediately put on a bus or ferried into Europe in a car.

“They just get slung on a bus, and there is barely any system.

“Volunteers just queue up, get a [high-visibility] vest on and take whoever [they] can fit somewhere where they might have relatives or friends.

“I took four people to Berlin, for example, on my way home.

“You just turn up, get your details written down — often badly — and then, they say to go and find people to take with you.

“Volunteers and refugees just don’t have the time to sift through packages of clothes and say ‘Oh that’s nice, I’ll take it with me to Spain’ or wherever.

“They just sort of get on a coach and go.

“What they need is nappies [diapers], sanitary towels, blankets — really useful things that have a one-time use. Consumables, I guess,” said Hannerton, a specialist in supporting special needs and traumatized children.

He noted that more boxes containing clothes, strollers and bedding are abandoned in the parking lot each day.

Hannerton said the refugees currently arriving in Poland, Moldova, Slovakia and other border countries are “the lucky ones” who can afford to escape.

But even these people, who have money and cars, still have to walk across the border with only what they can carry.

“I found myself giving things on the border to the refugees crossing over.

“There are kids that literally walk for days. They might lose their families or might be orphans — they just walk to the border with no food and in whatever they are wearing.”