As temperatures plummet on Wednesday night, rain will mix with then change to snow.
By Ryan Adamson March 16, 2022
Facebook
Twitter
Linkedin
Email 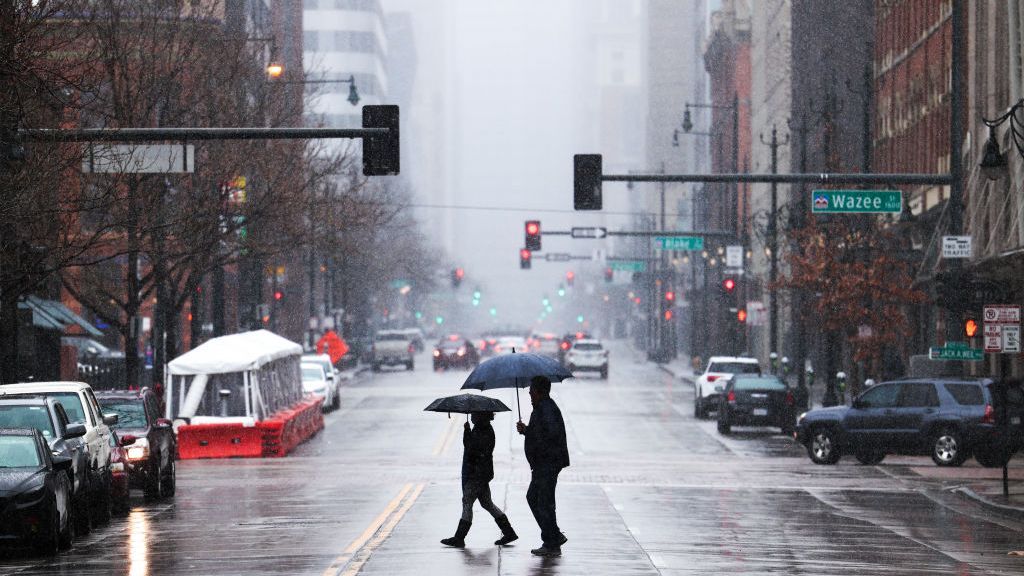 As temperatures drop Wednesday night, rain will turn to snow. The recent warmth may limit how much snow accumulates on roads in Denver, but the intensity of the snowfall could still allow roads to become slushy or snow-covered at times. (Michael Ciaglo/Getty Images)

Denver is known for having weather that varies wildly from day to day or even hour to hour, and AccuWeather meteorologists say that is exactly what’s expected in the city this week as winter prepares to pass the baton to spring.

The Mile High City has already gone through both ends of the temperature spectrum through the first half of this month when it set record high of 74 degrees Fahrenheit on March 2 and a record low of 7 degrees below zero on March 10, according to AccuWeather Meteorologist La Troy Thornton.

Much of Colorado is about to go take another ride on the temperature roller coaster. A balmy 70 degrees was observed at Denver International Airport on Tuesday, but a significant wintry blast will tell a much different story on Wednesday and Thursday.

As a system approaches from the west on Wednesday, west-southwesterly winds will keep the warm air in place, and precipitation will fall in the form of rain. However, the wind direction will abruptly shift to the north-northeast with the passage of a cold front by late afternoon. This will signal a big change from the recent springlike stretch to something more reminiscent of winter.

“Snow and temperature swings are not all that unusual [for Denver], especially as winter transitions to spring,” stated Thornton.

As temperatures plummet on Wednesday night, rain will mix with then change to snow. The recent warmth may limit how much snow accumulates on roads in Denver, but the intensity of the snowfall could still allow roads to become slushy or snow-covered at times, especially in the higher elevations outside of the city. On surfaces such as cars and grass, 3-6 inches is expected in Denver before the snow comes to an end by early Thursday afternoon.

Any snow that falls will pale in comparison to what happened around the same time last year. A huge storm dumped a whopping 27.1 inches of snow on Denver in a storm spanning March 13-14, 2021. That storm went into the record books as one of the five biggest snowstorms on record for Denver.

The strong March sun and temperatures getting into the lower 40s should promote some melting on Thursday afternoon, but the snow will be a reminder that winter is not over yet. This is the case even though normal highs and normal lows are rising quickly at this time of year.

“While the average high and low temperatures in any given place will generally follow a smooth curve, the reality is that most places end up above or below their daily average on any given day,” explained Thornton.

Highs in the middle to upper 50s and lows in the upper 20s are typical in Denver during the middle of March, meteorologists say.

“Those lows definitely still support snow, but the highs suggest that any snow probably won’t stick around too long,” said Thornton.

Following the snow on Wednesday night and Thursday, the weather roller coaster will be on its way up again. Temperatures by Friday should be back up near 50 degrees then well into the 50s on Saturday. By the end of the weekend, highs in the middle 60s are forecast, temperatures that are nearly 10 degrees above normal.

Although Sunday is the first day of spring, Mother Nature will not follow the calendar. AccuWeather forecasters expect a significant storm to develop in the Texas Panhandle on Monday that will again produce rain that could eventually change over to snow. The storm system will allow winter to briefly steal the spotlight from spring before temperatures rise later in the week.