As of March 15, more than 3 million refugees have fled Ukraine since Feb. 24, according to the United Nations.
By Adriana Navarro March 16, 2022
Facebook
Twitter
Linkedin
Email 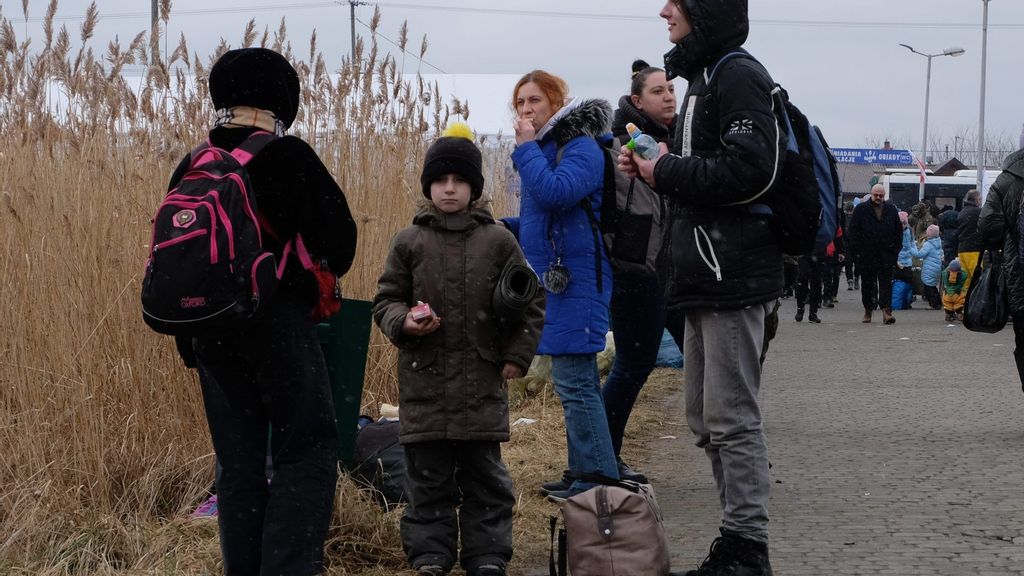 On March 9, 2022, children and families arrive at the Medyka border crossing into Poland after having fled the violence in Ukraine. A large volunteer response is distributing supplies including clothes, blankets, hot food and drinks, hygiene supplies and other necessary items. (UNICEF/Joe English)

When United Nations Children’s Fund (UNICEF) Communications Specialist Joe English arrived at the Medyka border crossing in southeastern Poland on March 10, he found one of the tents intended to shelter refugees with its side panels opened, all the bedding, cots and chairs set out to dry after snow had fallen over the area.

The outpouring of support for Ukrainian refugees has been eager, but impromptu — as has been the shelter trying to keep up with a growing refugee population.

After temperatures remained above average in eastern Poland and western Ukraine through most of February, they dropped below average in early March. Snowfall totals were fairly light, according to AccuWeather Meteorologist Randy Adkins, and with temperatures rising above freezing in most locations during the afternoon, there wasn’t much accumulation.

The little snow that fell was enough, however, to turn the soil and grass into mud under the tents. More permanent, raised flooring was being built come Thursday, English said, and UNICEF is working with local organizations to provide a more durable shelter.

“That day, the real struggle for refugee women and children was keeping warm, so the safe space for mothers and children was pretty full to bursting given one of the only available warm spaces at the border crossing itself,” English told AccuWeather from Lviv, Ukraine. Lviv is in the western part of the country about 50 miles east of Korczowa, Poland, one of the places many Ukrainian refugees are crossing into Poland.

As of Tuesday, March 15, more than 3 million refugees have fled Ukraine since Feb. 24, according to the United Nations Refugee Agency. About half of those refugees, roughly 1.5 million, are children, UNICEF spokesperson James Elder told reporters in Geneva on Tuesday. He added that 75,000 children become refugees every day.

Lviv, a city of 700,000, has opened its doors to shelter another 200,000 people from across Ukraine. But while it has served as an “oasis of calm,” English said, tension has been rising over the past couple of days.

“Before this weekend, it was quite far from where the main areas of fighting were — where we’ve seen some devastating scenes in Kyiv, in Kharkiv, in Mariupol, and so it’s been a little bit of an oasis of calm,” English said. “It’s also been one of the main crossing points for children and families as they move west toward Poland.”

While people in Lviv have been going about their day-to-day lives, with some even out on walks as kids play at the park behind English, the Russian missile strike on a nearby military base over the weekend has drawn the war, and the possibility of being separated, into a sharper perspective.

The weather has been a challenge to both ongoing volunteer efforts and the far-traveling families, English said. While some have been able to travel by train and bus, others are walking for days on end.

“The kids are getting sick, physically sick, with a cold, upset stomachs, and none of this is helped when you have minus 12, minus 14, minus 16 degree-days of rain, days of snow, so there are very real health risks for children as well,” English said, referring to Celsius temperature readings. Low temperatures in Lviv dipped to 16 degrees Fahrenheit over the weekend, well below the average low of 29 F degrees for this time of year.

But the real concern, English said, is for those who might not know where they’re going next. Staying in a temporary shelter from a converted gym or converted shopping outlet won’t be sustainable or a long-term solution.

UNICEF is currently working with the United Nations High Commissioner for Refugees (UNHCR) and local authorities to set up “blue dot centers,” which will provide safe and warm shelter for families coming into the city. More importantly, they’ll give kids an opportunity to have some semblance of normalcy as a place to “just be kids,” English said.

And the weather in Lviv will be improving some in the days ahead. Adkins said the weather will be seasonably chilly, mostly, with temperatures forecast to stick around the low 40s F for the next few days. But it will be mostly sunny and temperatures will rise heading into next week and, by Tuesday, highs could be above average.

No matter the weather, refugees will continue to need help for the foreseeable future.

“But we must be clear,” Elder, the UNICEF spokesperson, said. “Despite tireless efforts from volunteer grandmothers to governments, scouts to U.N. agencies, so long as this war continues, the situation for Ukraine’s children will only get worse.”