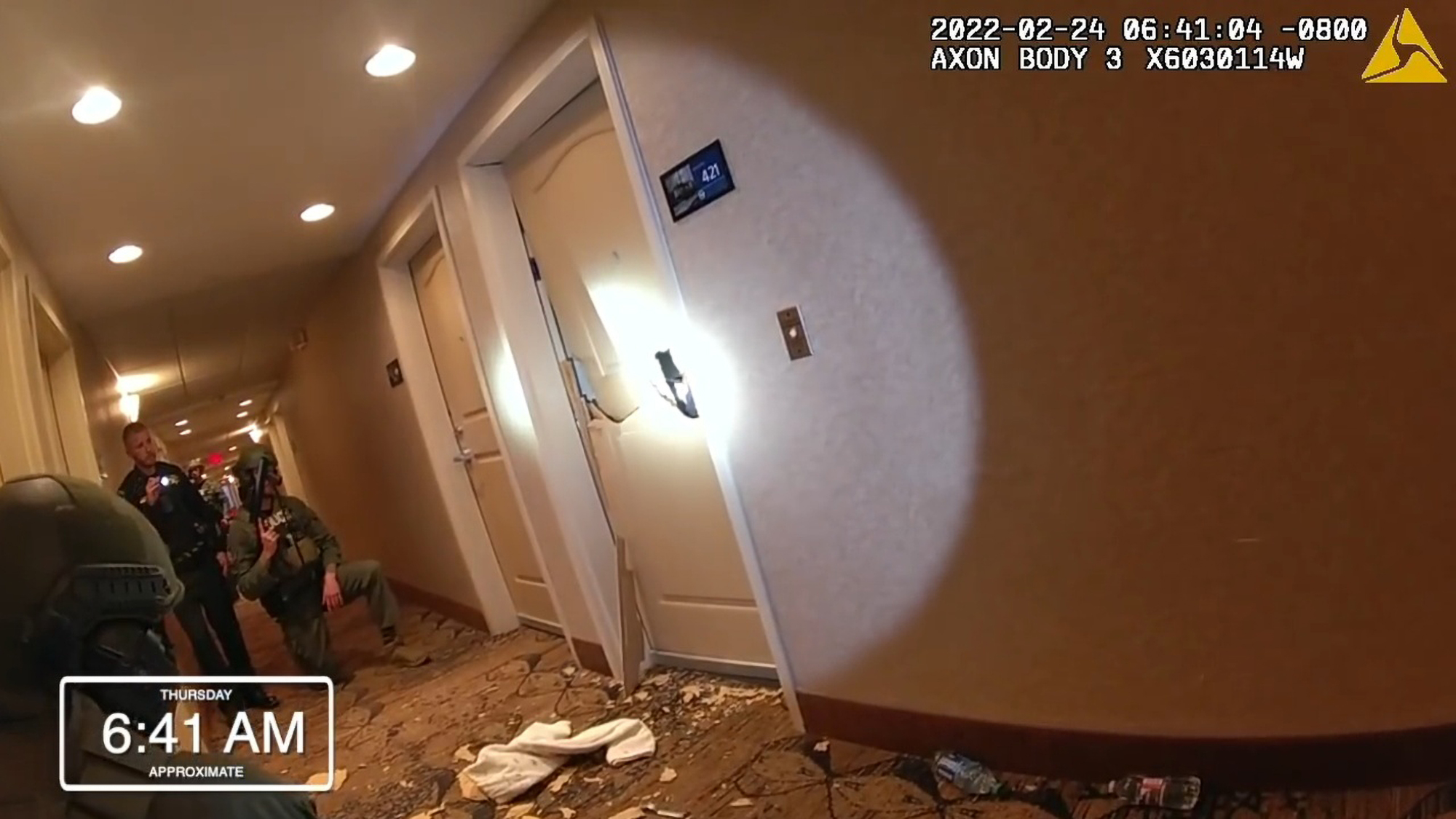 Police shine a light on the hotel room door behind which a man barricaded himself for several hours in Pittsburg, California, last month. The man eventually exited the room brandishing a knife, and was wounded by a police officer who fired two shots. (Pittsburg Police Department/Zenger News)

A California police officer shot a 45-year-old man who barricaded himself in a hotel room and apparently brandished a knife at armed officers.

The officer-involved shooting took place Feb. 23 at the Hampton Inn hotel in Pittsburg, California, which is about 40 miles east of San Francisco.

Pittsburg police said they were releasing the suspect’s name, along with footage of the shooting, on March 15 to be “foster transparency and trust” with the community.

Ashton Porter, of Alpharetta, Georgia, faces five counts of felony assault with a deadly weapon on a police officer, one count of felony vandalism and one count of criminal trespassing.

The video that was released, captured by a body-worn camera, was described by police as “critical incident video,” as it contains a small portion of the footage from a standoff that spanned more than 20 hours.

“Just after 12:30 p.m., Pittsburg Police officers responded to the Hampton Inn on California Avenue regarding a man breaking out a hotel window and smashing items inside his room.” The statement said that Porter had locked himself inside his fourth-floor hotel room and was still there when officers arrived. “He had now barricaded himself inside using the furniture from inside the room.”

According to the statement, members of Porter’s family arrived at the hotel and told officers that he was “suffering from an acute mental health crisis, and they were seeking to get him some assistance.” Because Porter, who was still refusing to come out, was experiencing mental health difficulties, police said they contacted the department’s specially trained Crisis Intervention Team.

Through the evening, mental health personnel and officers continued to communicate with Porter, police said. Porter’s family and spouse also tried to convince him to leave the room and get help.

“During conversations, the man made statements he wanted to ‘end it all’,” police said. “Officers were concerned he could potentially fall out of, or jump from, the broken fourth-floor window and were able to use a utility boom truck to lift a plywood sheet to the hotel room’s window to cover it and prevent this from happening.”

According to the statement, Porter “was armed with a large butcher knife and was consistently swinging the knife around.” As a result, the Pittsburg Police Department tactical team was called in at about 9 p.m.

Mental health staff continued to talk with the man for a few hours. But police said “no progress was made despite their best efforts.”

Police said they told Porter not to bring the knife, but he nevertheless came out holding it.

“The man then started to walk toward those officers with the knife in his hand, raised over his shoulder. One of the officers fired his service weapon, striking the man twice in the upper body. The man was immediately taken into custody, and a tactical medic stabilized him for paramedics to transport him to an area hospital.”

In a March 15 news release, police identified the officer who fired at Porter as Ernesto Mejia, a seven-year veteran of the force and a member of its tactical team.

Police also said Porter has been released from the hospital and remains in custody under a bail of $430,000.