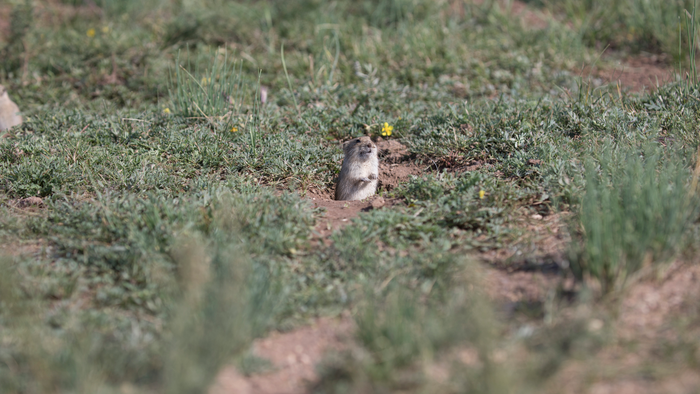 A rodent species that lives on the steppes of Russia and northern Asia shapes its environment by trimming unpalatable bunchgrasses to watch for predatory birds in an example of natural ecosystem engineering. (Guoliang Li/University of Exeter)

Suburbanites may have something in common with certain tiny rodents. Scientists have observed voles regularly trimming the tall grass in their neighborhoods, both to maintain them and to make them safer.

An international team of scientists studied the curious behavior of Brandt’s voles or steppe voles (Lasiopodomys brandtii), a rodent belonging to the Cricetidae family. The species can be found in northern China, Mongolia and Russia, making its home in grasslands and shrublands.

The team, which published their findings in the journal Current Biology, noted that the voles were seen trimming tall native bunchgrasses (Achnatherum splendens) not for food but to stand watch for hungry flying predators called shrikes. Shrikes are sparrow-like carnivorous birds of the Laniidae family, which is made up of 34 species in four genera.

The paper’s authors have dubbed the behavior “ecosystem engineering.”

“When shrikes were present, the voles dramatically decreased the volume of bunchgrass,” said study co-author Dirk Sanders, a researcher at the University of Exeter. “This led to fewer visits from shrikes, which apparently recognize cut-grass areas as poor hunting grounds.

“An activity like this is costly for the voles in terms of energy, so there must be high ‘selection pressure’ to do it: cutting the grass must significantly improve their chances of survival.”

When the researchers draped nets over test areas, the voles stopped cutting the bunchgrass because shrikes could not swoop down on them as prey anymore. “We sometimes underestimate the ability of wild animals to react to changes in their environment,” Sanders said.

The study showed that voles can alter their behavior in response to the feared predators and actively modify their environment. “It also underlines that the loss of even a single species in a food web can result in unexpected changes to an entire habitat,” said Sanders.

The study may have implications for managing rodent populations in pastures, according to lead author Zhiwei Zhong. “Keeping or planting these large bunchgrasses may help to attract shrikes and … reduce the population density of voles,” said Zhong.

“Given the ubiquity of predation risks faced by consumers and the likely ability of many consumers to alter the habitat structure in which they live, the interplay between predation risk and ecosystem engineering may be an important but unappreciated mechanism at play in natural communities,” the paper’s abstract stated.

Planting bunchgrass may be an alternative to the use of rodenticides for controlling vole populations. A 1996 paper by Dale Nolte of Denver Wildlife Research Center, part of the U.S. Department of Agriculture, noted that Brandt’s vole is “the most widespread and the most detrimental rodent to the steppes of Mongolia,” harming crops and pastures. The paper revealed that the rodents are susceptible to zinc phosphide, which transforms into a toxic gas once it is ingested. The compound is used as a fumigant in grain stores.