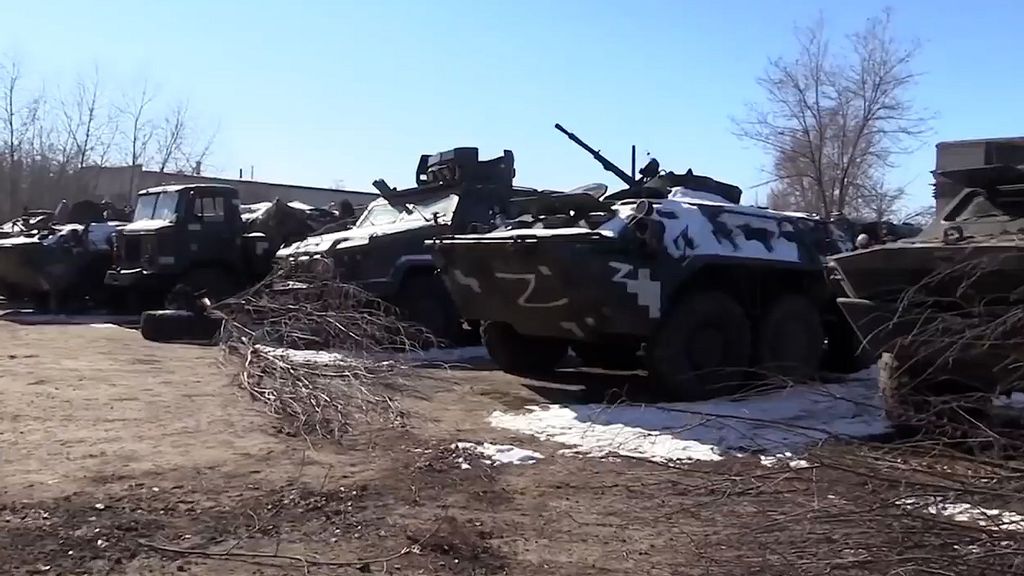 Russian soldiers were seen on video handing out what was said to be captured Ukrainian weapons to fighters in the self-proclaimed Luhansk and Donetsk People’s Republics in eastern Ukraine.

“Captured equipment and weapons of the Armed Forces of Ukraine, Ukrainian nationalist battalions and territorial defense battalions, which were abandoned, stored in warehouses and seized during the special military operation, were transferred by the Armed Forces of the Russian Federation to units of the people’s militia of the Luhansk and Donetsk People’s Republics,” Russia’s Ministry of Defense said in a March 14 statement accompanying the video release.

“Equipment and weapons, both Soviet-made and supplied by Western countries, after checking their technical condition and working order, are transferred to the divisions of the People’s Republics,” the statement said.

Russian Defense Minister Sergei Shoigu had said on March 11 that captured Ukrainian weapons and hardware, particularly armored vehicles and antitank systems, would be handed to the armed forces of the two republics.

Russia said on Saturday its troops might attack supplies of Western weapons in Ukraine.

“We warned the United States that the orchestrated pumping of weapons from a number of countries is not just a dangerous move, it is a move that turns these convoys into legitimate targets,” Russian Deputy Foreign Minister Sergey Ryabkov reportedly told a state television outlet.

NATO Secretary-General Jens Stoltenberg responded by saying a Russian attack on supply lines of countries providing weapons to Ukraine, which is not a member of the defense alliance, would constitute a dangerous escalation of the conflict.

“The allies are helping Ukraine uphold their right for self-defense, which is enshrined in the U.N. Charter,” Stoltenberg said in an interview with Canada’s CBC News. He made the comments while he, Canadian Prime Minister Justin Trudeau and the leaders of Spain and Latvia visited NATO’s base and training range outside Latvia’s capital, Riga.

“Russia is the aggressor, and Ukraine is defending itself. If there is any attack against any NATO country, NATO territory, that will trigger Article 5.” Stoltenberg said, referring to the self-defense clause of NATO’s founding treaty.

Germany has reversed a longstanding policy of banning all exports of lethal weapons to conflict zones and said it will deliver 1,000 anti-tank rocket launchers, 500 Stinger surface-to-air missiles, nine Howitzers, 14 armored vehicles, as well as fuel, to Ukraine.

Russian President Vladimir Putin’s forces invaded Ukraine on Feb, 24 in what the Kremlin is still calling a “special military operation” to “demilitarize and denazify” its neighbor. The war has caused millions of people to flee the country, sparking Europe’s biggest refugee crisis since World War II.