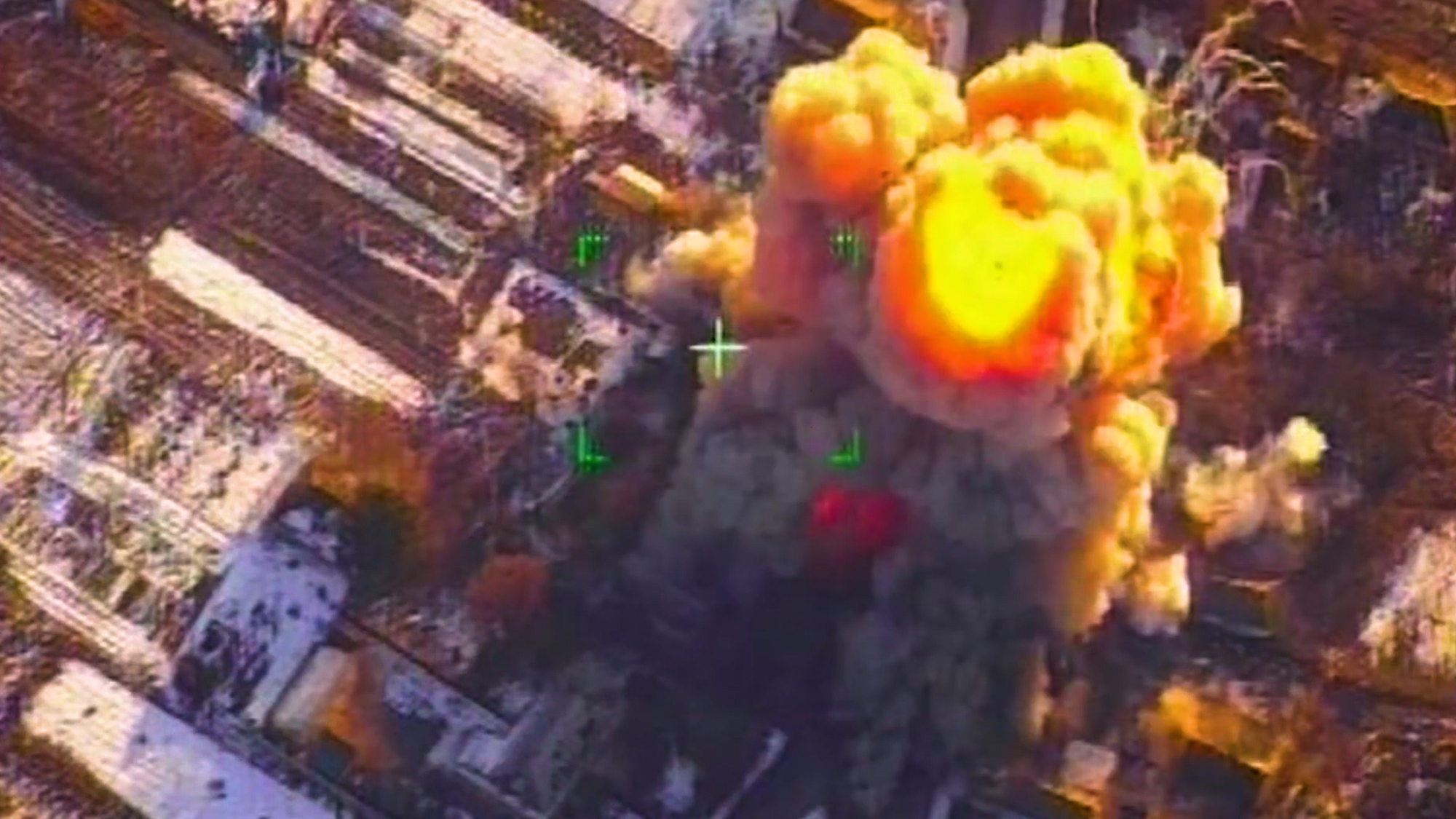 Two combat vehicles of the Armed Forces of Ukraine were allegedly destroyed by a Russian forces' precision-guided munition as seen in this screenshot from a video. (Russian Ministry of Defense/Zenger)

The Russian Ministry of Defense released footage of missiles allegedly destroying two Ukrainian combat vehicles on a village street after being spotted by a drone.

“Two combat vehicles of the Armed Forces of Ukraine were discovered by an unmanned aerial vehicle [UAV] of the RF Armed Forces. The objects were destroyed by a precise hit of a precision-guided missile,” the Russian ministry said in a statement accompanying the video.

The statement did not specify where in Ukraine the combat vehicles were allegedly destroyed.

In the footage, the targets are seen being pinpointed on the street before suddenly erupting in a huge fireball.

Also on Tuesday, the Russian Ministry of Defense posted other footage of soldiers handing out captured Ukrainian weapons to fighters in the self-proclaimed Luhansk and Donetsk People’s Republics in eastern Ukraine.

A few days later, on Feb. 24, Putin’s military invaded Ukraine in what the Kremlin is still calling a “special military operation” to “demilitarize and denazify” the sovereign European country.

With the war in Ukraine now in its 20th day, the White House announced Tuesday that U.S. President Joseph R. Biden Jr. will travel to Brussels next week to participate in a March 24 summit at NATO headquarters on “Russia’s unprovoked and unjustified attack on Ukraine.”

Ukraine has been eager to join the powerful military alliance, which has long promised to make the Eastern European country a member. Russian President Vladimir Putin has used that potential membership as a reason for invading Ukraine.

The United Nations human rights office said Tuesday that 691 civilians, including 48 children, have been confirmed killed and 1,143 injured since the war started. The real numbers are likely much higher.

Among the dead was Fox News cameraman Pierre Zakrzewski, who died Monday after his vehicle was struck by incoming fire in Horenkawhile outside Kyiv.

“He is someone who has served in many war zones over the course of time,” White House press secretary Jen Psaki said during Tuesday’s media briefing. “He was a war zone photographer who covered nearly every international story for Fox News from Iraq to Afghanistan to Syria during his long tenure working.”

“Our thoughts, our prayers are with his family, with the entire community as well,” Psaki added.

“Pierre was a constant in all of our international coverage. I, like countless others, always felt an extra sense of reassurance when arriving on the scene and seeing him with camera in hand,” Fox News president and executive editor Jay Wallace said. “The legacy of his positive spirit, boundless energy and eye for the story will carry on.”