Barking dogs alerted the farmer to the snake as it entered his car's fuel tank.
By William McGee March 15, 2022
Facebook
Twitter
Linkedin
Email 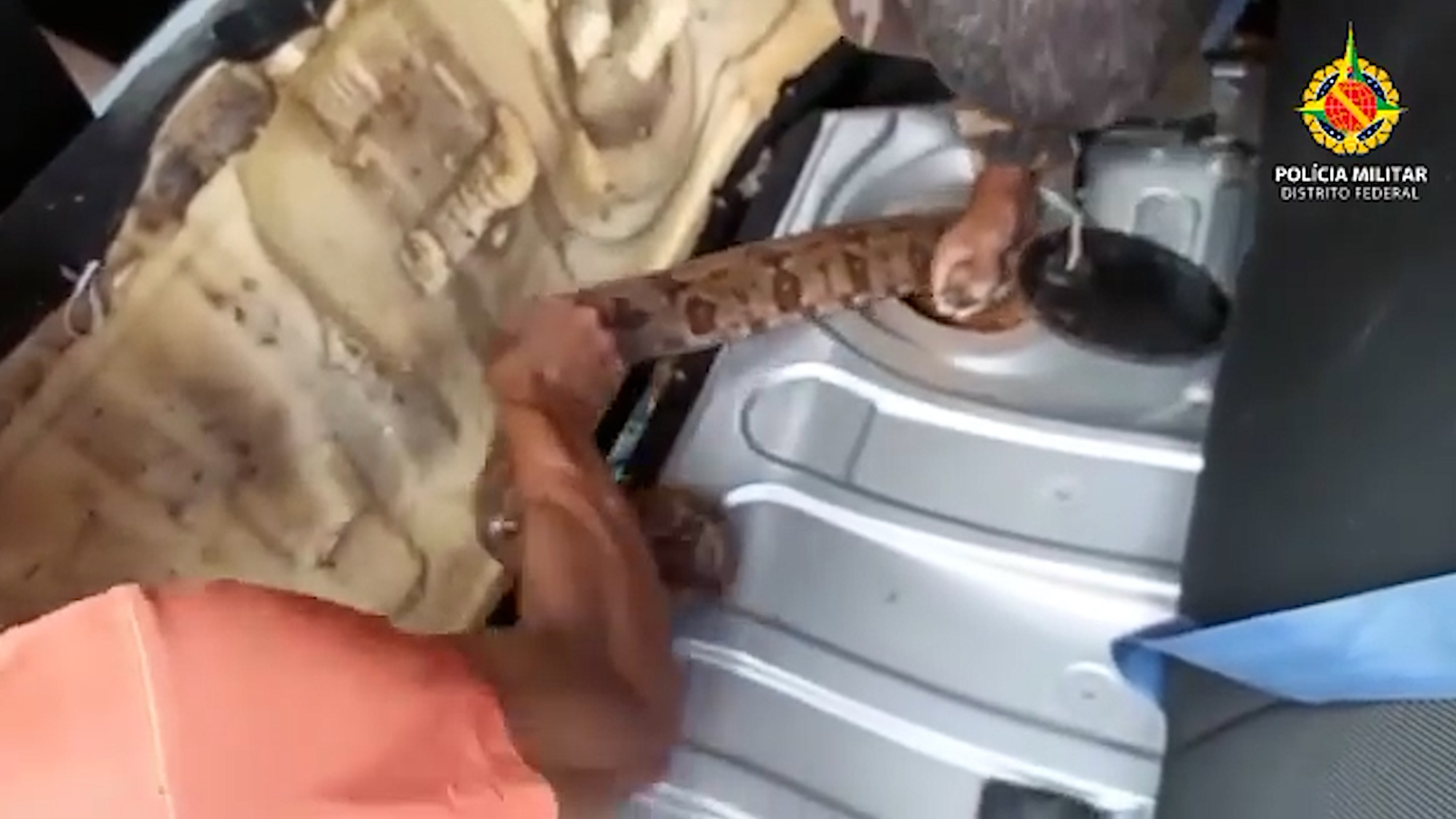 A 5.9-foot boa constrictor was found inside the fuel tank of a car in Planaltina, Brazil, on March 12. (BPMA/Zenger)

Brazilian cops were called upon to help remove a large boa constrictor from the innards of a shocked farmer’s car on the morning of March 13.

The incident took place in the Jardim Morumbi Rural Center in the administrative region of Planaltina in Brazil’s west-central Federal District.

The car owner, a local farmer, called emergency services after spotting the snake entering the vehicle, according to news site Metropoles.

Military police arrived on the scene and assisted with the removal of the snake, which they were only able to reach by removing the car’s back seats.

In footage of the incident, a police officer is seen manipulating the body of the large brown boa constrictor with one hand, using a circular motion to ease it out of the tight space in which it is wedged. Only the snake’s head and tail can be seen outside the tank, while the rest of its body remains stuck inside.

A second officer assists by holding the head of the snake, keeping its jaws closed, so it doesn’t injure the rescue party. When the circular motion fails to loosen the boa constrictor from the tank, the first officer tries pulling its body straight out.

Sergeant Edson Amado of the Military Police Environmental Battalion (BPMA) said the farmer was alerted to the snake by his barking dogs. “He saw part of the snake entering above the fuel tank and then contacted us,” said Amado.

The sergeant believes the boa constrictor was feeding on chickens at the farm and was attracted by the heat of the vehicle’s engine. The critter was found between the fuel cap and the tank.

Since the snake was uninjured during the rescue, it was later released in a wooded area in Planaltina.

The BPMA has advised residents to call them upon encountering a wild animal, noting that the animals are always released in the nearest conservation area if they are in good health.

Alternatively, if they find an injured animal, the BPMA sends them to the Wild Animal Screening Centre of the Brazilian Institute of Environment and Renewable Natural Resources.

Currently, the BPMA has about 297 police officers and soldiers who are assigned to rural or urban land patrolling, nautical patrolling and environmental education. They also provide support for other environmental inspection bodies operating in the state.